I’m Legally Obligated to Inform You, I Ain’t a Real Critic

Borderlands 2 ends with the simple statement, “No rest for the wicked.” By no coincidence, a similarly named song by the band Cage the Elephant acted as the player’s introduction to the world of Pandora three years ago with the release of the first Borderlands game. There couldn’t be a more apt philosophy to describe a game that is, at its core, a nonstop festival of ultraviolence and black comedy. It’s a game where plot takes a backseat to character and substance a backseat to style. It’s a game that is so far over the top that it’s reached the moon, built a giant laser on it, and blown you up. And yet, even though it’s an addictively fun, thoroughly entertaining, and genuinely engaging title, it could have been better.

The Return 2 Pandora takes place an indeterminate amount of time after the original title. After opening the vault, the Atlas Corporation has lost much its foothold over Pandora, but a rival arms dealer, Hyperion, is there to fill the void. After the original vault hunters are defeated and driven back to their last bastion city of Sanctuary, players will take on the role of one of four new vault hunters. Allied with the former player-characters of Borderlands, they take on the forces of Hyperion President Handsome Jack in a race to stop him from unleashing the fabled, unstoppable monster known as The Warrior.

Although the plot of Borderlands 2 is larger and far more interesting than the bare-bones story of the original, it’s far from perfect and ensnared with holes and contradictory plot twists. However, the writing itself is absolutely fantastic, and the game is riddled with memorable, quirky characters that breathe life into the world of Pandora, providing incentive to not only move on with the game, but to complete each and every one of the game’s dozens of side quests. Many fall into the typical fetch or kill quest archetypes that gamers are familiar and fed up with, but the regular banter that accompanies the accomplishment of each objective make them more than worthwhile, and a few chains even stand out as particularly unique. Tina’s quest chain, “Best Tea Party Ever,” or Face McShooty’s self-explanatory “Shoot Me in the Face” are just a couple that stick with you long after completion. 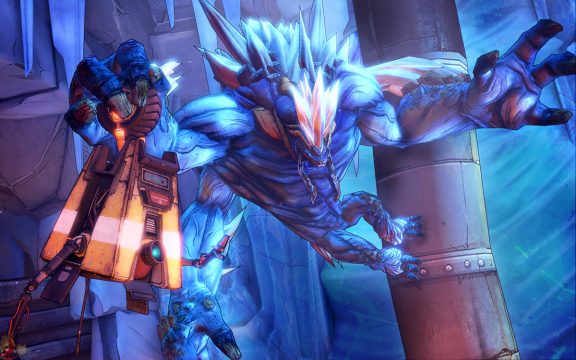 The steady improvement in the quality and quantity of writing lies parallel to the rest of the game, which has also seen a solid slew of simple but effective improvements. Borderlands 2 is a hybrid first person shooter/dungeon crawler RPG. Players can choose between four unique classes, each of which has their own special ability and skill trees that can be used to improve their combat effectiveness. The new classes in particular are among the most obvious improvements to the Borderlands formula, featuring three lengthy skill trees with a wide variety of passive stat boosts, unusual passive effects unique to a particular class, and even a few skills that completely change the effects of a class’s special ability. For example, the Siren’s Motion skill tree ends in a skill that replaces her Phaselock ability with Thoughtlock, a mind control skill that makes a target attack its allies. On the opposite side, her Cataclysm skill tree ends in an ability that makes Phaselock deal corrosive, shock, and slag damage to its target and all nearby enemies. On top of the skill trees, players can also improve their characters through their “badass rank.” Ranks are gained by completing a huge array of challenges within the game, and every few ranks provides players with a new token that can be spent on a small, permanent bonus to a stat. Best of all, badass rank applies across the board to all characters, meaning new characters will start with a nice advantage. For those who don’t want it, this advantage can be turned off in the menu.

Beyond skill trees, customization comes from the huge selection of available guns, all randomly generated and dropped by foes. Like any good dungeon crawler, the guns all have unique stats that affect how they operate, things like fire rate, magazine size, reload speed, accuracy, and of course base damage. On top of that, there are hidden statistics like recoil, scopes, and zoom distance. All weapons even have their own manufacturer, some of which have specialities of their own. Tediore weapons toss out a grenade when they’re reloaded, Dahl weapons burst-fire when zoomed in, and Hyperion weapons have improved accuracy the longer one holds down the trigger. Finally, there are also five forms of elemental damage that can appear on weapons — fire, corrosive, shock, explosive, and slag. Fire, corrosive, and shock abilities create a sort of rock-paper-scissors relationship within the game: fire weapons are strong when used against bare flesh, corrosive weapons deal more damage to armored targets, and shock weapons do heavy damage to shielded enemies. Slag damage is new to Borderlands 2, and causes affected enemies to take more damage from every type of damage other than slag. Explosive is a neutral damage type that does decent damage to everything.

Unfortunately, players may be disappointed to discover that the drop rate for rare items in Borderlands 2 is quite poor and a noticeable step down from the original title. The primary reason for this is that the quality of loot drops is now partially tied to the number of players in the game, meaning that those who wish to play single-player may find it surprisingly difficult to find good weapons. This is one of the more disappointing changes to formula, and really hampers the game’s value as a single player title, which is a shame since the larger storyline and more numerous side quests also makes it much more solo-friendly. 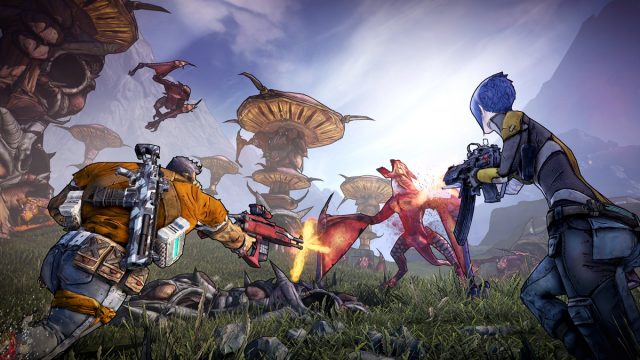 The environments of Borderlands 2 are much more varied than its predecessor.

Once players get into the thick of combat, Borderlands 2 actually plays like a typical first person shooter. Players will aim their crosshairs at whatever they want to die, and then pull the trigger, causing said target to explode into cartoony, fleshy bits. The AI is quite good, especially among the human characters. Enemies actively strafe and take cover, and some of the more intelligent ones can even give orders to their fellows. Enemy-on-enemy combat is quite common, especially when human and monster enemy groups come into contact, creating a very dynamic field of battle. The levels are all well designed, with plenty of cover, high ground, and environmental hazards like exploding barrels. Every enemy also has a unique critical point on their body that will take additional damage — the obvious headshot for human enemies, but more varied locations for others. Mechanical enemies can even have their limbs blown off, adding new levels of strategy when dealing with them.

Defensively, players actually have three lines protecting them from a grisly end. The first is a shield, which can be upgraded by finding newer and better ones as loot. Shields rapidly regenerate over time so long as players are able to avoid taking damage for a few seconds. Once a player’s shield is depleted, their health bar starts to go. This naturally grows as players gain additional levels of experience, and can sometimes be improved via class skills, class mods, or relics. Health doesn’t regenerate, but certain classes have skills that alter this. If worse comes to worse and a player’s health is also completely depleted, fight-for-your-life mode is activated. This last-ditch mode lasts for a few seconds, and during this time, players have limited mobility but complete access to their weapon arsenal. If players can manage to defeat an enemy before the timer runs out, they will be instantly revived with a percentage of their health and full shields.

Borderlands 2‘s visual style makes use of a cartoony cel-shading, and it looks terrific. It features a much more varied landscape than its predecessor, and despite the game’s violent themes, the colors and characters are vibrant and distinct. The enemies in the game all have a unique style to them, and the game’s audio helps to bring them to life. Bandits and psychos all scream bizarre, often hilarious things at players during combat and in the throes of death, and even the mechs have surprisingly amusing error messages as they’re systematically taken apart. Buzzard pilots sometimes hum “Ride of the Valkyries” as they spray machine gun fire from the skies. The voicework for the main and quest characters in particular is terrific, and help give the bizarre, usually psychotic personas their charm.

Despite being an all-around improvement over the original Borderlands, Borderlands 2‘s biggest flaw is that it plays it safe. The formula hasn’t really changed much, and while a few system and interface tweaks make it a stronger game, it feels more like a patch or expansion than a brand new experience. Apart from the copious quantities of new writing, Borderlands 2 is pretty much identical to its predecessor, and after three years, one would have hoped for a bit more innovation. Thankfully, the original Borderlands was already a terrific game, so franchise fans would be remiss to not pick up its sequel. For players new to the series however, the original can be safely skipped over without fear of missing out on much. The main campaign of the game is massive, easily clocking in at forty hours or more for a single playthrough, a total that’s remarkable for either a dungeon crawler or a shooter. For any RPGamers looking for black comedy and big guns, Borderlands 2 is a solid choice.