Borderlands 2 is closely related to the first game, just with a lot more of almost everything. While the first game had a minimal storyline, that has been changed here. Guns, enemies, explosions, skills, environments and more: all of these were present in Borderlands, but the sequel increases the quantity. Quantity does not always mean quality, but Gearbox and 2K Games did a good job at keeping things from feeling like needless sensory overload. Borderlands 2 attracted people who weren’t enthralled by the original by doing the same kind of stuff but better, and it’s even more addictive.

Five years after the first game’s conclusion, the world of Pandora is overseen by the Hyperion Corporation’s Handsome Jack. He’s made a practice of inviting Vault Hunters to the planet and then killing them as a means of keeping the populace quiescent. The player’s chosen Vault Hunter escapes this fate somehow, and after navigating the wintry wilderness of Pandora with the aid/hindrance of Claptrap’s guidance, stopping Handsome Jack in his quest for something of enormous power is next on the agenda.

The narrative of Borderlands was very sparse, but such is no longer the case in the sequel. Many of the mysteries from the first game are answered here, and the world of Pandora is fleshed out to a greater degree. The player characters from the original game are present here as NPCs, and have considerably more personality than they ever showed before, while the other NPCs remain an entertaining bunch to watch. Handsome Jack also supplies something that was lacking in the original game — a strong antagonist. He’s an engaging fellow, but quite nasty in his language and deeds.

Borderlands 2 is an FPS in most respects, filled with varieties of weapons and shields for doing battle. Each type of weapon is made up of an enormous quantity of variants from manufacturers, and switching between the huge number of available options is encouraged throughout the game. Elemental affinities make certain armaments more efficient at taking down some foes, but there is no single correct way to eliminate the many adversaries. Seeking as many weapons as possible is an addictive pursuit, and testing them in combat is suitably rewarding, especially for weapons with illogical and ridiculous effects that are amusing to see in action. 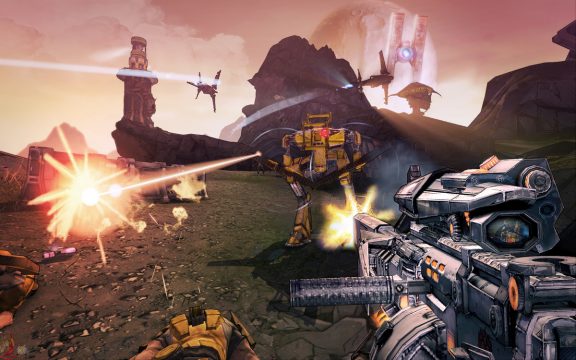 More weapon variety and grenade modifications make the second game stand out from the first, but other refinements have also been instituted. Quite a few new enemy types are introduced to keep things interesting, and a greater range of optional missions will also be found. Some have time limits now, while others force the player to come back much later due to incredibly high enemy levels. Completing every mission is a recipe for frustration as many come with annoying aspects, but most are completely optional. A good number of missions also come with amusing banter from the NPC who assigned them, complete with silly denouements that make the whole trek worthwhile. By accomplishing various tasks in the game that range from shooting lots of bullets to using particular kinds of damage the player earns Badass ranks, which individually make little difference but collectively boost various attributes by significant amounts. Achieving higher ranks of Badass status takes time, but as this entire aspect is voluntary they player can ignore it as desired.

The way Borderlands deals with challenge is not an exact science, and can be puzzling. Just like the first game, being killed allows the player a chance to revive if an enemy can be slain within a short time limit — otherwise the character respawns at the closest save spot minus a small percentage of the current cash. Enemies at a higher level than the player inflict and receive disproportionate damage, to the point where trying to tackle most of the DLC with a low character level is a recipe for suicide. Opponents also get lots more HP as levels increase, and only when armed with appropriate firepower will taking some of these foes down promptly be doable. Excessive quantities of HP are admittedly not a problem unless one plays through a second time and the opposition’s levels are increased to compensate, for such veterans of Borderlands 2 are presumed to know a little more about how to deal with its systems. Completing the game once is doable with perseverance, since many antagonists that are nasty foes will fall either with different tactics or gaining levels and equipment.

Fast Travel existed in the first game, but it’s been expanded a bit here. DLC areas with more than one map actually have more than one Fast Travel access point, which helps greatly since moving around in the first Borderlands extra locations could take a long time. Even with this means of getting around quickly, some parts of Pandora are big enough that navigating them more than once is very time consuming. At least the time enemies take to respawn is longer than in the first game, so unless the player is stuck in a location for a long time running through without fighting the same foes is an option. 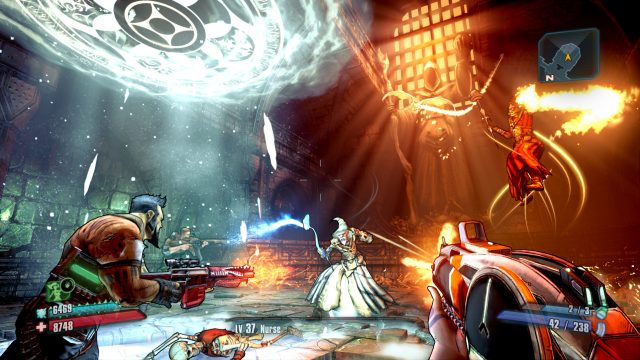 Animated skeletons and wizards? They’re not in the main game, but DLC can be really handy.

Just like the first Borderlands, ample DLC was produced for this one that can now be obtained in one fell swoop by an interested player. The extra scenarios range from the sublime (Tiny Tina’s pen and paper RPG world) to the merely adequate, but all extra areas feature unique adversaries and amusing dialogue. Even the worst of it is better than Moxxi’s Underdome from the first game, and taken together all the DLC is equal to almost as much content as the core game. Two extra player characters are also available as DLC, bringing the total to six and further broadening the options available. An unfortunate aspect of the DLC is a large number of heads and skins for all characters that cost actual money, and the game’s need to spend time searching for this material every time play begins.

Borderlands 2‘s visuals are strongly reminiscent of the first game, merely with more types of landscape and models of enemies to behold. Since the first game looked solid in most respects, keeping its general quality while adding more to the mix is not a feat to be slighted, especially when the fantastical realms of Tiny Tina’s DLC are considered too. Borderlands 2 sports audio that is an improvement over the first, with a number of interesting and worthwhile musical tracks plus a devotion to the variety in the sound foley of guns. Frequent voice acting is effective and adds quite a bit to the game, to the point where playing with the audio muted feels lacking.

Borderlands 2 is not a game in which asking too many questions is wise. If thought about logically, a planet inhabited by bloodthirsty psychos who never attempt to disable the automated turrets preventing movement past the boundaries of each area is nonsensical. Extending too much logic into this world is an unwise exercise that gets in the way of slaughtering hordes of opponents that may drop even better munitions. For any with even the slightest interest in this game who haven’t tried it yet, I wholeheartedly recommend doing so.