Ah, the licensed game. Despite measured progress in recent years, this category has been responsible for some of the greatest atrocities visited upon the video game playing public of all time. Bleach: The 3rd Phantom happily avoids being mentioned in the same breath as Total Recall or Dragon Ball Z: Ultimate Battle 22. Fans of the Bleach manga or anime will find a reasonably entertaining title, while non-fans should at least be able to stomach the game.

Whoever equated Bleach to tactical combat on the development team might not have taken the obvious route, but it is to the game’s credit that it plays respectably. Battlefields certainly look rather generic, with the player’s team of up to eight Soul Reapers moving to engage with the enemy in turn-based isometric tactical combat. A weapons triangle is present, with the effect of making no character too powerful. The immediate difference between The 3rd Phantom and many other tactical RPGs is that all combatants can strike enemies located on a diagonal from them, instead of simply in the four cardinal directions. Disappointingly, despite the enormous variety of Zanpakuto types found in Bleach, every character has this attack range.

Most of the options in combat are intuitive, but the Pressure command demands explanation. Scattered around the battlefield are numerous tiles with energy on them, and selecting Pressure builds a character’s spiritual force by using these. Higher spiritual force enhances statistics, along with enabling team attacks and the use of the form-changing and power-maximizing Bankai (if the character has access to either). Pressure usage adds an interesting wrinkle to the combat engine and is a nice way for characters out of enemy range to actually do something other than going on standby at the end of a movement.

Before battle there are ample options for customization. Points gained by a character from killing enemies can be used to increase that character’s statistics, or to grant new abilities such as increased movement or new kido (spells). Characters usually have the ability to support each other on the battlefield with extra attacks or defensive blocks, but they can also be assigned partners for team attacks that pack a lot of power prior to battle. The only trick to enabling team attacks is that both characters have to list the other as a partner, just one isn’t enough. Also, items must be manually assigned for use in combat, with a limit of ten at any time. 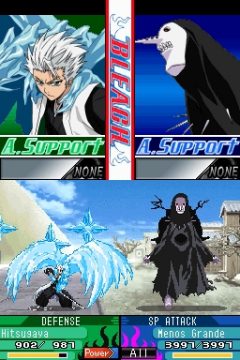 Toshiro ought to take even a Menos Grande down with no effort, but it wouldn’t be a very fun game if the Captains displayed their true power against peons.

Outside of battle altogether, there are frequent segments called Free Time. In these, the player goes through something like a board game that moves Kon along a path. Each stop along the path contains dialogue between the main character and other Bleach characters, who are usually at their silliest. Stopping at the right places will earn items and statistic increases for the main character. Since it allows for some wacky shenanigans with the extended cast of Bleach, Free Time is a welcome distraction and seeing everything is impossible in one play through.

If The 3rd Phantom has battles that maintain interest and plenty of customization options, what could be the problem? Pacing. Bleach is many things, but ‘slow’ is not an adjective that would usually be applied toward it. Nevertheless, battles take a long time to play out thanks to the lethargic rate at which things happen. Menus are intuitive and easily accessible, but they take a long time to navigate through, especially outside of battle when upgrading abilities. Text could also scroll faster than it does.

Bleach: The 3rd Phantom‘s story begins with the player choosing the main character as Matsuri or Fujimaru Kudo, who are twins in the Rukon District of Soul Society. They are rescued from a Hollow attack by Third Squad Captain Suzunami and his lieutenant Aizen, and given a home with the Captain and his sister Konoka. The twins grow up to become Soul Reapers and interact with the members of Soul Society roughly 100 years prior to the main Bleach storyline. The choice of main character doesn’t make a big difference in the story until later on, when an event occurs that thrusts the action into the present Bleach continuum, just after the Soul Society arc finished. At this point The 3rd Phantom deviates from established canon and goes into an alternate version of events.

The main tale is not very interesting in the game, unfortunately. Its twists are easy to guess and the twins, while likable enough, just aren’t very interesting. Too much of the main plot is devoted to clichéd dialogue that lacks much of the energy that characterizes Bleach. It is the interaction with the established Bleach cast, mostly during Free Time, that makes this game interesting. Matsumoto and Ikkaku, to name two examples, are a lot of fun to watch whenever their turns come up. 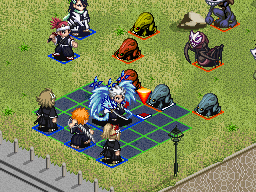 Some people get bigger when using Bankai, and become a lot harder to maneuver.

Outside of battle animations, the visuals are functional without being anything more since everything except the opening FMV could have been accomplished using Game Boy Advance hardware. Battle animations do look very good, with the catch that they’re limited in number and take awhile to play out. The music is fine to listen to, though it isn’t likely to linger in memory. Most of Bleach‘s North American voice actors contribute clips to the combat animations, and they do a respectable job at it.

There are ways to make The 3rd Phantom challenging, but the ability to level up freely in extra battles makes all but a very few battles easy. Usually there is no penalty for letting characters other than Matsuri or Fujimaru fall in combat, further minimizing challenge. However, post-game content offers a considerably increased difficulty, and is substantive enough to effectively double the game’s length. In addition to the many levels of the Tower opening up after finishing the game, it is very difficult to recruit every character or see all of the Free Time interactions with one play. For a tactical game, The 3rd Phantom is not very long and can probably be completed in around twenty-five hours.

Bleach: The 3rd Phantom is not going to snare fresh fans for the franchise, but at least it does not fail so completely as to be unplayable. The world of licensed games has a horrid reputation indeed, so finding that the departure of Treasure from designing Bleach games has not resulted in a complete absence of quality is reassuring. For those indoctrinated with Tite Kubo’s series who have an interest in tactical games, this will do the job without excelling.