It’s not often that a game on the title screen gives the player a warning on its difficulty. The difficulty, though, truly is the star of the show as it’s meant to be a challenging game for even hardcore tactical RPG fans. Battle Brothers is a challenging and gritty tactical RPG from Overhype Studios that has players fighting for survival in a low-power, medieval fantasy setting. When it gets going, Battle Brothers has enough to offer to make this a great game, but optimization issues and steep learning curve will have some retreating early.

The campaign starts after the Battle Brothers mercenaries are ambushed by Hoggart the Weasel, and the player takes over as commander since the previous one has just been killed in battle. Their goal is to get revenge while trying to build the Brothers back to glory. To achieve this, players need to hire new mercenaries to grow the team and equip them with weapons, upgrade their warriors, and complete paid tasks around the world.

At this point, Battle Brothers doesn’t provide much direction for where to go or what to do next. The prologue is offered as a tutorial, but it doesn’t go much further than to teach the basic mechanics of battle and how to traverse the map. The finer battle mechanics and any help to get players started in building the band of mercenaries are not in the tutorial. For veteran players of tactical RPGs, this may not be too much of an issue, but for those who aren’t hardcore players, this game has a steep learning curve. While that in itself isn’t all that bad, the added challenge of the game’s combat mechanics makes it very difficult for beginners to grasp. Beginner mode does alleviate some of the pain, but this game is meant to be challenging, so there still isn’t be much room for error.

After players get equipped with a better understanding of the game, Battle Brothers is an immersive mercenary experience. The gameplay and in-game currency reward players just enough to keep them constantly wanting to move ahead even though danger is always right around the corner. Players will find themselves constantly taking jobs to earn rewards and purchase upgrades. The compensation is usually fair, rewarding just enough to heal party members, give them a few drinks to lift their spirits, and make thoughtful purchases. Being attentive and using reward money efficiently is crucial to keep the team alive and satisfied. Doing so boosts Brothers’ stats during battle, whether that be stocking up on provisions to keep them nourished during travel or using bandages to heal injuries during battle. These things will constantly need to be managed and purchased to be prepared for anything that comes on the way. If not, battles can become tougher and members will leave because they are not satisfied. 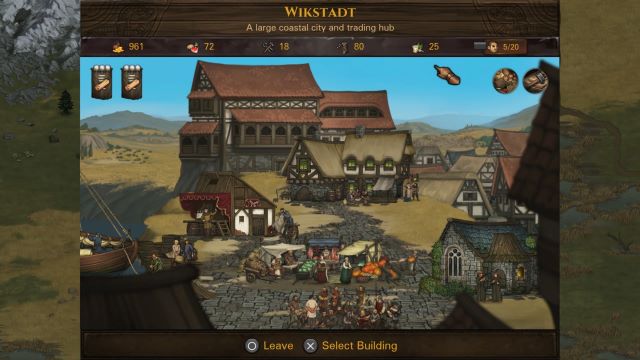 Cities like Wikstadt are where players can restock on equipment, hire new mercenaries, and negotiate contracts to take on jobs.

Players can find mercenary jobs while visiting towns by negotiating contracts. These jobs range from clearing out routes to escorting trading caravans. These are the main stream of income for the Battle Brothers mercenary team and build renown with the settlements. Some of the jobs can be as easy as scouting an area, but most involve clearing out enemies to open up trade, escorting caravans, or delivering packages. Enemies include humans, goblins, beasts, and zombies, with each requiring different tactics to be defeated. Raising renown by completing tasks increases the rewards for future jobs, and raises the difficulty. At a certain point players will hit a wall where mercenary jobs don’t give the necessary resources to progress further in the campaign. This is when it’s necessary to further explore the map away from settlements to find Legendary Buildings. These locations offer challenging battles that provide better loot that can further strengthen the team. At no point during the campaign will players feel safe and at peace, which feels right for a game that sets out to be challenging. The game never feels unfair, it just never eases up and makes every decision important.

Speaking of decisions, each campaign starts with multiple options to choose from. Selectable elements include company name, late-game crises to encounter first, and to replay previous maps. Players also decide between multiple combat and economic difficulty options, and even choose the level of starting funds that are received at the beginning of the campaign. There are many ways to customize before and during a campaign, making it a replayable game that invites players to sink hundreds of hours into it. To make the campaign even more challenging, there is also an Ironman Mode that disables manual saving.

Once the player has made their starting decisions, a 2D character model is placed on a large map littered with icons of towns to visit and areas to explore. The map almost looks like a painting, and distinctly shows the different terrains in the world. While Battle Brothers doesn’t push any boundaries visually, it does put together the medieval setting nicely. Fights don’t have much in the way of character animations, with just small swooping effects for axe and sword swings. There’s no voice acting in the game but the Brothers’ grunts can be heard simultaneously with the sound of weapons piercing their armor. The campaign is also accompanied by over two hours of orchestral music that includes separate tracks for each individual faction. For a game that some players will enjoy for 100+ hours, the lengthy soundtrack never becomes an annoyance, and does blend well with the background.

The heart of this game, though, is its combat. The hex-tiled grids can include elevation, trees to block long-ranged weapons, or even murky waters, depending on where in the world battle takes place. Weapons are pretty standard, like swords and axes, with each having their own distinct advantage in battle. For example, the woodcutter’s axe in the early game can be a powerful weapon, but it costs more AP to use and will more easily fatigue the Brother using it. Players not only have to manage where to place the Brothers, but also be aware of their fatigue and AP. If a member is fully fatigued they will not be able to attack or move, leaving them vulnerable to attacks. Players need to also pay attention to enemy gear to strategically decide how to attack them and even surrounding an enemy with multiple Brothers has benefits as well. 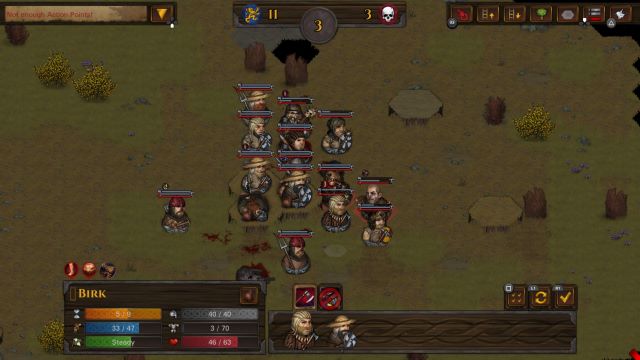 Fighting means that Brothers will sustain injuries, and Brothers can bleed out during battle or receive a severe injury that reduces some stats. Ultimately, many Brothers will likely be lost along the way, which means that many new Brothers need to be hired. However, keeping the best and most-leveled Brothers alive is important to continue into the late-game crises. Higher leveled members can be equipped with perks that are useful in battle and are important to have in tougher battles.

There are four different late-game crises that will play out during the campaign. While players can choose the first one to appear or let it be determined randomly, late-game crises will start to pop up as the campaign progresses, with the first one coming around the 50-100 day region if the roster meets certain requirements. These epic battles are unique, challenging, and fun to complete. However, like most of the campaign, the story, which is told through reading text, doesn’t really matter much. After reading through the prologue, it was evident that the story wasn’t a means to draw the player in but rather give some context to what they are doing in the campaign, with the same applying to the late-game crises.

Although the game itself can be frustrating with its difficult combat, a significant part of the frustration comes from how the game has been adapted to consoles. Battle Brothers is a PC game that is now ported over to consoles and the experience suffers from a lack of optimization. Menus and item management are already clunky to begin with and navigating menus on console just doesn’t feel efficient enough. To either select items or move to the next destination, players need to drag a floating cursor and click on whatever they want to do. While that would work well for PC, it doesn’t feel right for consoles and would be would work better with the ability to lock onto items or destinations instead. This is especially annoying when trying to start a battle with a moving enemy on the map as it is difficult to accurately follow the enemy with a controller.

These issues ultimately make the console version of Battle Brothers a difficult recommendation. The combat mechanics, customization, and replayability make this a great option for those looking for a challenging tactical RPG. It’s an immersive mercenary sim that will have lovers of the genre hooked immediately with it’s low-power, medieval fantasy setting. Just know that this is not a casual gaming experience and newcomers will have a steep learning curve to contend with to really enjoy the game. Additionally, the game works much better on PC by design. Battle Brothers can be a great game, but only if the player is willing to push through its high barrier of entry.