Rolling in a Wagon

Not quite a year ago, I was opening the plastic wrapping on my new copy of Atelier Lina – Alchemist of Schtrole. After a couple of holiday weeks with it, I then wrote up a nice impression with the expectation that Lina would follow in the footsteps of Annie and Rorona and be localized in the US. Obviously, this has yet to pass, so I feel the need for a review.

If the folks in the audience are familiar with any Atelier titles at all, at the least they’ll know Annie and Rorona, so most series-based comparisons will be made in relation to those two games. That said, with this title Gust has proven just how much flexibility the Atelier formula has.

The story begins as Lina Alteria, a newly licensed young alchemist, runs into her friend Lou as she heads home to her village on the Schtrole border. As they’re talking, the forest north of them suddenly bursts into flames. In the aftermath, they’re found by a group of now-homeless forest fairies who blame the human pair for the mess. Thus Lina and Lou find themselves press-ganged into a three-year campaign to revive the forest. A sympathetic merchant allows Lina to use one of his wagons as she begins her new job as wandering alchemist and merchant.

From the very beginning there are things that make Lina stand out from other Atelier titles, but to start with there’s the wagon. It allows Lina to transport far more material than any heroine in the series, can be upgraded to various types, has its own set of equipment that affects its speed and carrying capacity, can be given special effects that kick in during battle, and even has a tent that allows Lina to save in the field (at the cost of one day to set up). 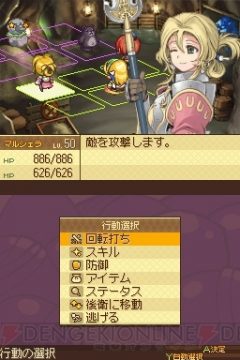 Only the strongest knights wear pink.

With the wagon comes the fact that Lina is a merchant as much as she is an alchemist. She has to deal with shop owners in various towns, filling in orders and selling items. Once enough business has been done, a shop may level up, broadening its range of merchandise in the process. The game’s fifteen shop owners all have their own pricing and preferences, with some paying much more for certain items and others simply refusing to buy specific materials. Also, by asking around Lina can gather rumors and information that can raise or lower prices nationwide. All this wheeling and dealing means that Lina is on the road far more than other Atelier heroines, and her own atelier is mainly a place to store stuff and attend to the Fairy Elder’s demands for materiel.

Here’s another significant way in which Lina differs from Annie and Rorona: in those games, official requests came at regular intervals with regular deadlines. The nine official requests in Atelier Lina come in three distinct sets, and a request from each set may be active concurrently. The main trigger is the amount of progress made in reviving the forest, and not a set date. However, without a schedule of deadlines, it’s not always apparent that another request in a set even exists until the Elder asks the player to fulfill it.

The first set of requests is for materiel, and tasks Lina with the difficult job of collecting 600 pieces of lumber at the very beginning of the game. There are four more such requests after that. The second type of request is financial, and it will take Lina the entire game to even put a dent in it. The third set, which only shows up late in the game, is to eliminate three large groups of monsters roaming the forest.

All these requests, piled up on top of the regular stuff that Lina has to do as a merchant, really feel like overkill on the part of the developers. Any player coming into this game blindly will be in for a shock sometime in the third year. It’s enough to make one wonder if this game were ever intended to be completed without judicious abuse of the new game plus option. 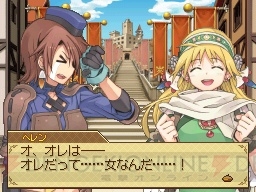 Can you feel the drama?

If the whole thing still seems like too much, there is a plus side — Lina can get some helpers later in the game. Around the time the third materiel request is completed, fairy helpers become available for hire. The first ones available can barely do anything, but as Lina rids the forest of monsters better grades of help can be hired to mass produce items.

While the story side of things is robust enough by Atelier standards, character interactions definitely fall below the standard set by Atelier Annie. The setting is largely responsible for this, as Lina has six towns to Annie‘s one, and the large scale character scenes make much less sense if none of the characters really have a chance to meet one another. The major scenes in the game have some nice art splash pages attached, though.

Combat has seen some improvements on the model set by Annie. First, Lina and the nine other playable characters all have a variety of skills that they can learn, with an MP system as the limiting factor. Second, when a character or enemy is knocked out they’re pushed to the back row and will revive with a fraction of their HP in three rounds. Hitting a KO’ed character (or knocking it out while it’s on the back row) sends it out of battle completely. Another feature that’s useful later in the game is that the Y button can be used to speed through battles on auto-pilot. 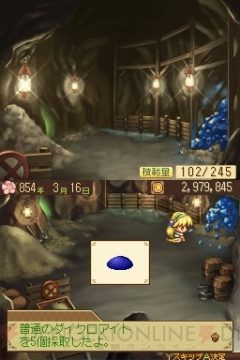 Looking for rocks in all the right places.

While the player battles, haggles, and synthesizes, there will at least be some decent tunes to listen to. Music in Atelier Lina is generally peppy and upbeat in keeping with the rest of the series, and as the forest restoration project proceeds more tunes become available as background music for Lina’s workshop. As a gift to longtime fans, this BGM includes the personal themes for every Atelier heroine up to the time of Lina‘s release.

In the final analysis, importers shouldn’t have that much trouble with Atelier Lina as long as they don’t mind not understanding most of the story scenes. Like all games in the series, it has a decent amount of kanji, but not as much as some. Aside from wagon-related items, most everything found in Lina is also in Atelier Annie, so in that way it isn’t too difficult to understand. All it really takes is trial and error… actually, a lot of trial and error in some cases, but that’s the way Atelier titles often work. Any veteran of the series should enjoy this one.