The True Power of Alchemy

Felt and Viese have enjoyed a peaceful life on the floating island of Eden. Both have studied alchemy, though Felt has neglected his studies a bit. Unfortunately, this peace is ruined when some of the holygrounds of Eden suddenly begin to violently fade away. Felt, with the assistance of the Azure Azoth, a sword designed to protect Eden, decides to head through a portal to another world in an attempt to find a way to restore Eden, or at least stop its decay. Atelier Iris 2: The Azoth of Destiny encompasses not only Felt’s journey in the other world, but also Viese’s side of the story back on Eden.

Viese’s adventures are very similar to the shop-based sidestories in Atelier Iris with the exception of them playing a much larger role in the central storyline. By forming pacts with various mana and continuing her research on Eden, she is able to complement Felt’s work in the other world and do her share to restore the world to its former glory. Unfortunately, the items Viese can create aren’t nearly as creative as those found in the game’s predecessor, but there is still a pretty good selection and many ways to customize them. While Viese’s quests are peaceful and scientific in nature, Felt is not so lucky. He very quickly finds himself being assaulted by monsters and caught in the middle of a war. 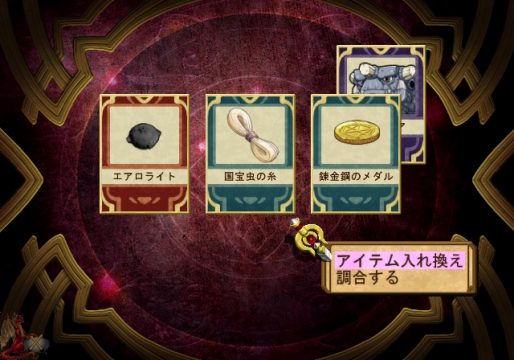 Making enormously powerful contraptions with only some string, metal, and a rock? MacGyver would be proud.

Fortunately for both Felt and the player, the battle system has received a nice overhaul since its predecessor. A new meter has been added that keeps track of how close characters are to their next turn, and those with higher speeds move along it more quickly. Different actions will set their users back by different amounts on the meter. Defending, for example, offers a good deal of short-term protection, but also allows that character to act again after only a small amount of time. Attempting to break an enemy will set the attacker rather far back on the meter, but it will also knock the target back a bit, effectively delaying its turn. Knocking an enemy back far enough on the meter will effectively stun them, decreasing its speed and increasing the damage dealt to them. Repeatedly damaging enemies as long as there is at least one that is stunned creates a combo which gives the player an exp/skill point bonus when the battle is over depending on how long the chain is. This also tends to make random battles far more interesting than they would have been otherwise.

Of course, there are other ways to damage enemies besides break attacks. In addition to breaking them, it is also possible to use charge attacks, skills, and items to decimate enemy ranks. Rather than use MP, skills draw power from a shared charge meter. This meter is increased by using charge attacks, defending, and by taking damage. By carefully balancing charge and break attacks along with items and skills, there are many opportunities for strategy in the majority of battles.

Unlike most games that offer a bit of strategy in even random encounters, Atelier Iris 2 is surprisingly easy. Even some of the more powerful bosses present only a minor challenge to players that have built a decent arsenal of powerful mana items and mastered the more important skills. Another nice improvement this iteration features is an encounter gauge. Once a set number of enemies have been defeated, they will not return until the heroes exit the area or use a special mana item. This not only reduces the risk of players becoming sick of random encounters, it also helps add some balance to the heroes’ level and keeps the difficulty relatively stable.

Another nice feature of the encounter gauge is that it also prevents the game’s playtime from becoming artificially fluffed with an excessive amount of encounters. The game itself can be finished in about thirty to thirty-five hours, but there are a few sidequests that can bolster this. Players looking to complete the item lists, dragon den challenges, and other optional quests will likely find themselves spending an additional ten hours. 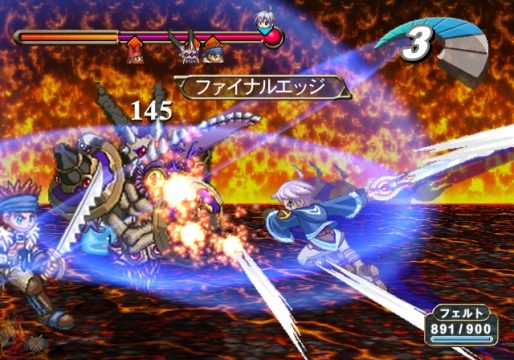 The battle system has been given a nice upgrade.

As there are fewer random battles, the game’s focus shifts a bit more in favor of the story. Though much of the game is character-driven, the storyline has also received a nice boost since Atelier Iris. The story still fails to stick out very high above the crowd or accomplish anything particularly original, but it has nevertheless taken several steps in the right direction.

Though still unable to rise above the rest in story, it has managed to do so aesthetically. The somewhat unique visual style has been complemented with numerous anime cutscenes. In battle, the large, detailed, and well-animated sprites have retained their level of quality, if not improved. Enemies in the same family are generally more than just palette-swaps; most of them have small to medium differences in their size and design. It’s fine touches such as these that really stand out. Unfortunately, the visuals suffer quite a bit out of battle, but at least the character portraits are good.

Though the quality of the music varies a bit, there are a very large amount of tracks to be found throughout the game, and the ones that really matter are quite good. The soundtrack features a wide variety of background music that would significantly reduce repetition on its own, but the game also replaces certain common tracks such as the battle theme as the game progresses so hardly any of the music gets old.

Overall, many aspects of the series have been refined in Atelier Iris 2. The battle system and story in particular have received some nice upgrades, though the music and visuals have also increased in quality. While those that enjoyed the more creative aspects of the original may be a bit disappointed to find that the unique quirkiness and variety in the item creation system have been toned down a little, the improvements to the rest of the gameplay easily make up for this loss. This also makes the game more appealing to a larger audience than its predecessors. Those that enjoyed Atelier Iris will almost surely enjoy this one, and those who weren’t quite as impressed might want to give this upgraded and more mainstream iteration a shot.