The possibility of games in the Atelier series being localized has always been uncertain. Although NIS America gave RPGamers the privilege of playing the Atelier Iris series, the fate of the “true” Atelier games was always unknown. The original Atelier games focused heavily on having an artist’s workshop and using alchemy to better the lives of other people. This year NIS America surprised gamers by localizing the first “true” Atelier title for North America, Atelier Annie: Alchemists of Sera Island, which only recently came out in Japan.

The story of Atelier Annie is fairly simple: Annie is a lazy girl who wants nothing more than to marry a rich man so that she may never work another day in her life. Instead of being a productive member of society, she chooses to sleep and dream all day of a Prince Charming on a white horse who will make her rich and famous someday by marrying her. Finding out that she prefers to be a good-for-nothing bum, Annie’s parents consult grandfather Bentner on what should be done. His solution? Send Annie to a remote island and force her to participate in an alchemy contest to create a resort that will bring tourism to Sera Island. When Annie wakes up, she finds herself in her new atelier with a letter from her grandfather, and she meets Pepe, a wise-cracking fairy who has been sent by Annie’s grandfather to train her not only as a great alchemist, but as a contributing member of society.

While the plot of Atelier Annie is fairly straightforward, players have the opportunity to build off the main premise and change the story through the requests of the townspeople, and based on Annie’s rank for every assignment she completes. There are only six assignments that are mandatory to complete, each with its own set list of items that must be gathered to complete the task. The contest spans for over three years, and assignments are handed out every half a year, giving Annie a specific due date and key instructions on how an item should be synthesized. Based on Annie’s performance she can receive a gold, silver or bronze prize. The prize she receives determines how much money the player will have to create a new facility or renew an older one. Annie is a game that heavily relies on quests and character interaction, so the more quests you perform for your friends, the more you learn about their background stories. It is absolutely vital to fulfull every quest that Annie is given, and while some have no due dates, the one’s that do will help determine Annie’s popularity in the contest. The more popular Annie is, the better chance your attractions have to generate profit. The more profit you have, the easier it is to manage all of your attractions accordingly. 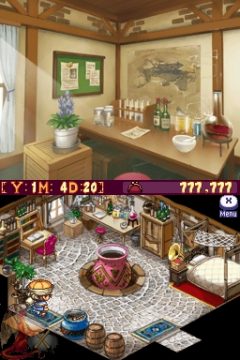 Although popularity is an important aspect of Atelier Annie, the second and more important element in keeping the folks of Sera Island happy is completing their requests. Every request received in the game will have players scurrying towards the various different gathering points to collect ingredients for synthesizing. Synthesizing items is fairly simple – as long as Annie has the recipe and the ingredients an item can be created. Sometimes the requests may have specific traits needed. For example fusing a bastard sword with the red trait creates a “red bastard sword”, or fusing the big trait to a bomb creates a “big bomb”. The more demanding the item created, the better reward and level of fame Annie can receive for completing the assignment. The simplicity of the alchemy system in Atelier Annie makes it highly addictive and easy to waste days making items and completing as many requests as possible.

With the number of tasks thrust upon the player throughout the course of the game, it’s very easy to become overwhelmed and miss deadlines. Time passes quickly in Annie, since just traveling to gathering spots or attractions requires several days. It’s very easy to go away for a day to gather items and find another request waiting upon Annie’s return to the workshop, and not always will players have the items or the recipes to create the item, especially depending on how much time has passed. If players miss a request deadline, Annie’s fame goes down and harms the sales of her shop. Facility requests, however, have no deadlines for task completion, but should the player gather enough fame in each facility by completing its requests, that facility can be renewed to generate more profit. If players leave a facility unattended it will harm overall sales for that month, so it’s important to visit every attraction whenever possible. However, as previously stated, it’s very difficult towards the end of the game to constantly visit each facility because there are often too many requests to take care of simultaneously.

While the number of requests can be overwhelming, so can combat if Annie and her crew are not well leveled. In fact, it’s easy to die in Annie if you go into a gathering spot completely unprepared. Combat is completely turn-based, though it takes place on a six-squared grid. Players can only have three characters in combat, and their placement on the grid determines what kind of attack they have. Each gathering point has a level cap for the enemies, so it’s important to constantly be leveling up your characters, because sometimes walking into a new area enemies can lead to defeat in the first battle. Once Annie’s companions reach a certain level they receive a unique attack that is entirely their own. However, even with these special attacks, combat is fairly uninteresting, since pressing ‘A’ to win is the usual strategy. Challenges only occur if players forget to equip party members correctly, or if a boss fight is encountered, though these only occur because of requests. Items synthesized can also reduce the difficulty of combat further, especially if you have lots of giga bombs to spam on high level enemies. Though combat is a dull trudge, it’s not how the majority of the game will be spent, and is easy enough to deal with.

While combat is probably Atelier Annie‘s low point, localization is a major highlight of the game. The dialogue is incredibly charming and laugh-out-loud funny. Numerous times I found myself having a laughing fit because of how ridiculous some of the characters are. Whether it’s Kilbert pretending he’s a noble warrior, or Kyle getting into mechanical mischief, or Beaux being a free-loader, the characters are so much fun to engage with that they’re lovable. Annie’s interaction with these characters creates some interesting insanity, and every moment with Pepe, Gillian or Beaux involved will have players in giggle-fits. Annie’s interaction with the members of Sera Island are very important for success in this game, as these episodes are what gives Annie her popularity on the island. The members of Sera Island also add more to the story, as every interaction provides background on the characters of the island, and in turn they also teach Annie very important life lessons. However, not everything they have to say is interesting or useful, and sometimes players will find themselves getting sidetracked when friends come to visit because more often than not, they like to bring along a new task assignment. 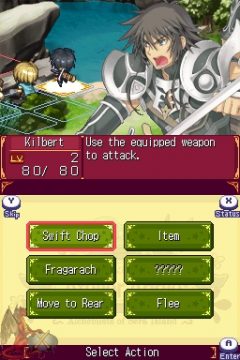 While Fragarach scares the enemy away, Kilbert really is a big, sweet geek.

Another high point in Atelier Annie is its music and sound. The soundtrack for the game is very light and whimsical, and it makes players feel like they are on a resort island where they are dealing with the constant hustle and bustle of creating a tourist town. Each of the themes makes the player feel completely caught up in the moment, and considering that certain characters provide a large dose of the game’s insanity, it’s a good thing their themes convey that in a catchy way. There is also voice acting in Annie, but it’s only in Japanese. However, this is not necessarily a flaw, as the voice acting is very well done, and the option to turn it off is present. The voices add to the experience, but I recognize not everyone enjoys listening to Japanese voice acting.

Annie is absolutely stunning to look at, since it is rich and colourful. In fact, the entire game is so colourful that it really conveys the whimsical experience intended. Character portraits are fairly detailed, while the models elsewhere are done using a super-deformed style that enhances the experience. The area designs begin by looking somewhat simple, but become much less so as facilities level up. There are also lots of tasking mini-games to be completed by the player, which are a lot of fun to play and do not feel like performing actual chores. The mini-games in Atelier Annie are so addictive that players will find themselves wasting money just to play Whack-A-Puni repeatedly.

Atelier Annie can be completed in roughly twelve to fifteen hours, although it’s a game that cannot be properly enjoyed in a single playthrough. It is not possible to create every attraction in the game, nor complete every request given. This is a game that demands many multiple playthroughs to acquire its seven different endings, along with all the requests, items, and attractions that cannot be experienced in just one session. Atelier Annie is a game that shouldn’t be missed, especially if players are looking for a good laugh and some challenging tasks. Just be prepared to work hard, or else you might receive a beating from Pepe for slacking off!