Arelite Core is an interesting title in concept. Its protagonist is atypical for the SNES-era style of story that is presented, combat takes a little more concentration than usual, and the world depicted features plentiful items of interest. Developer Dragon Slumber gets credit for trying something a little different, but I cannot claim that what is attempted was a success. Hopefully a follow-up will address the numerous issues to be found, because this is unfortunately not a shining beacon of indie success stories.

Arelite Core‘s narrative begins with an experienced but humble blacksmith named Karden being tasked with investigating a new discovery in the local mine. The discovery is of the extremely useful forging metal Arelite, but its rarity in recent decades makes this find quite important. A monster in the mine’s depths causes a cave-in that thwarts any attempt at immediate exploitation of the find, but a reluctant Karden is nevertheless persuaded by the town elder to depart on a quest to explore the world to further his skill as a blacksmith, as at his current skill the metal is beyond his forging prowess. Karden and his irrepressible friend Baeme don’t go far before finding that nefarious forces are on the hunt for Arelite too, and are quite willing to do whatever proves necessary to obtain it for a destructive purpose.

Karden’s quest shifts from seeking to improve his blacksmith ability to needing to save the world from an approaching menace, which never achieves the interest level it should. The lead is a kindhearted and upstanding fellow who never broadens to include other personality traits except determination, which makes him fairly dull even late in the game when a personal crisis should have led to some kind of drama instead of doldrums. Some other characters are of different species, but the brief snippets of conversation meant to address how they came to ally with Karden do not come anywhere close to fleshing out their personalities. This underdevelopment affects relations between the different species of the planet and NPCs as well — being followed around by the spirits of the planet’s heroes from an earlier generation should have been more interesting. The text is also prone to misspellings and strangely worded passages that make reading it something of a chore. 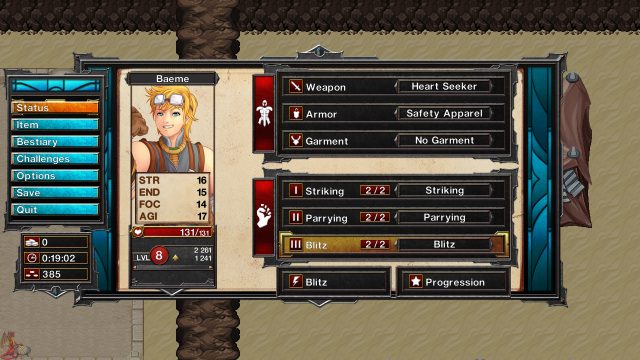 The kind of smile that cries out for a beating.

Battling is a turn-based affair that looks similar to many other games, but has some subtleties at work. There is no such thing as a standard MP system, and special abilities can only be used through a meter charged by attacking and taking damage. The meter often raises quickly, but it still prevents the player from spamming powerful moves, especially when stronger abilities cause the participant that uses them to wait longer for another turn. Instead of the standard defense option, parrying for a turn will also raise the special move meter and can have side effects upon enemies, though these bonuses are achieved automatically without need for additional player input. Enemies and protagonists will become stunned and miss a turn after enough blows land, which is a critical component for dealing with bosses. Unfortunately the method by which enemies are encountered gives the illusion of choice by having visible balls of flame on the screen, but these will seek out the party and multiply in number until avoidance is impossible. Fighting also tends to take a long time even against adversaries that aren’t very threatening, which makes the encounter system doubly irritating.

It may not be obvious at the beginning, but Arelite Core has a structural similarity with Final Fantasy IV in that Karden is the only character to stay in the party permanently. The party members change as dictated by the plot, but what they can do is always in the player’s hands because of stances. These allow the player to affect how characters attack, the power of special moves, and additional effects parrying will produce. What Arelite Core does that other games would be welcome to emulate is always let these stance points be reassigned, never locking things in stone should circumstances warrant a different approach.

Karden’s blacksmith trade is acknowledged by having him able to craft equipment, though only in town and when in possession of forgeable materials that are finite in number. Otherwise the menus and available options are workmanlike but unremarkable. Arelite Core has some technical problems that intrude on occasion to make the experience less pleasant, with slowdown in battle being a prominent one. While an Achievement makes clear the possibility of beating the game in under ten hours, frequent incursions of slowdown make that much harder to do. In certain environments the player will find it quite easy to exit the programmed area and enter glitch land, where the game’s automatic saves upon entering a new room will be a boon due to the necessity of reloading. There is also an unfortunate possibility of the game experiencing an error that crashes the program just after completing key battles. 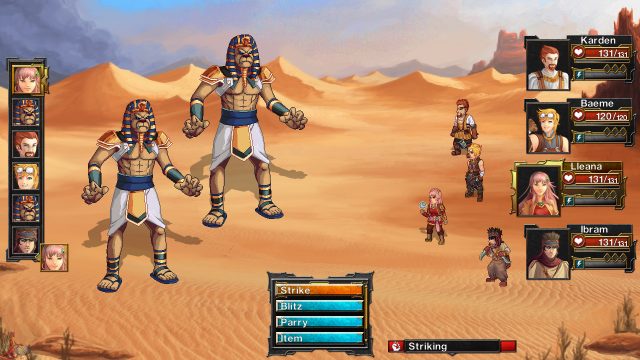 Smokey the Bear got tired of being nice and recruited some Egyptian friends to enforce the fire rules.

Most of the visuals are functional without looking particularly appealing, thanks to a graphical style that resembles Adobe Flash images. The many variations for adversaries are impressive though, as even familiar sorts like orcs are given distinct looks not quite like anything else out there. Aurally the game is workmanlike without being memorable most of the time, though at least its battle themes are pleasant. Certain sound effects are reused too often though, making attacks which look completely different have the same audio accompaniment as more mundane things.

I wanted to give Arelite Core a chance, and found little things to admire even while the package as a whole was a disappointment. It’s pretty hard to forgive a game in which beating the final boss is greeted by an immediate unknown error that crashes the whole shebang though. I’m hopeful Dragon Slumber will be able to move on to better things in the future, because this isn’t a very good advertisement of whatever talents it possesses.