Japanese gamers had to wait several years and initiate a campaign directly to Sony for Arc the Lad III to enter their lives, but North Americans got to experience the whole thing in one box courtesy of Working Designs. Its separation of several years from the development of the first two explains why III feels a little different, yet much of what it does is very worth experiencing. This series is not the pinnacle of tactical RPGs, but like its predecessor and descendant, III is certainly worth playing.

Arc the Lad II ended with events that rearranged world geography, and a correspondingly high level of destruction and death among the human population resulted during what was deemed The Great Disaster. Some years later a teenager named Alec wistfully remembers being rescued from The Great Disaster by a Hunter, a profession he wishes to make his own. His chance comes when bandits strike his village and get booted out by a Hunter Alec employs, something that solidifies the youth’s determination to engage in this occupation. After achieving Hunter status, Alec goes on a journey around the world with his spectacularly immature pal Lutz, interacting with a variety of personages along the way.

The central narrative takes its time to get moving, leaving a variety of smaller stories to pick up the storytelling slack in the early hours of the game. Many of the personalities featured here recur in later jobs, and the mix of odd characters on display is quite effective. Highlights include an ornately theatrical bandit troupe dedicated to the patrol of waterways, a family with differing merchant specialties and a knack for trying unwise business strategies, a spoiled little rich girl with an unreciprocated love for Alec, and an off-putting ninja with an astonishing propensity to cling onto women at the drop of a hat. These experiences are memorable and bring an assortment of oddballs to life in the game’s world.

What eventually surfaces as the core narrative trajectory is a group called the Academy’s dogged pursuit of an energy source that humans would be most unwise to reawaken. The villains aren’t particularly memorable, and the quest to stop the Academy necessitates quite a bit of fetch questing just before the game’s climax. Alec and his compatriots are likable characters, but their personalities don’t undergo much change as the game progresses. Seeing all the surviving characters from Arc the Lad II only highlights how odd it is that majority of the world’s saviors stay on the sidelines this time. 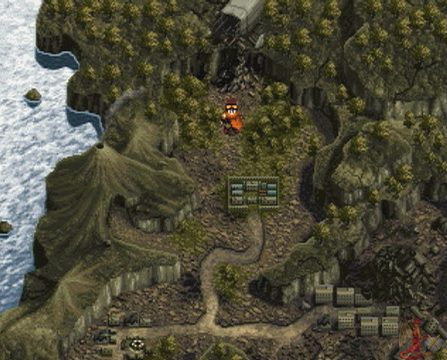 The Sierra Club would have its work cut out around here.

Alec’s life as a Hunter dictates most of the game’s flow, since until the final stretch progress is contingent upon accepting jobs at the Hunter guild available in each area. Jobs critical to the plot are not unveiled until some optional ones have been completed, which actually does an excellent job of making the fascinating side characters come to life. Tackling every job isn’t difficult, since the player is alerted at the guild whenever something important will supersede all other events, but it does reinforce the game’s linearity. On the first disc, going back to a previous location is impossible once the cast has moved on, and certain spots that stand out from the landscape cannot be accessed until their plot-critical beats have been hit in the story.

Combat itself is an even faster version of the structure found in the first two Arc the Lad titles. Up to four of the protagonists square off against enemy forces that rarely number more than six for a single encounter, moving around grid-based environments and tossing attacks about in tactical fashion. Just as in the previous games the attack option is achieved with a single button press instead of going into a menu, as is shifting the direction a character faces. Finishing a battle in only a couple of minutes is common here, but rare in tactical games as a whole. A few changes have been made for III, such as characters gaining more statistics after a level, and counterattacks being considerably rarer. The essence of fighting will be instantly recognizable to a veteran of the first two though. Each protagonist has a specific technique set that doesn’t overlap much, with the character Theo’s unique ability to convert monsters into cards that can be used for a one-time attack to everything on the screen the most distinctive among them, ensuring that each member of the relatively small cast possesses a recognizable feel.

Arc the Lad II‘s item limit and lack of storage for spares made many things annoying, but III brings in both a means of preserving items not currently in the party’s possession and unlimited pocket capacity. Freed of the need to prune inventory constantly found in the prior game, keeping things on hand to see how they perform when synthesized is easy to do. Synthesis can be extremely helpful at supplying the characters with goodies better than the current shop inventories supply, though occasional use of a FAQ to cut down on waste is wise. 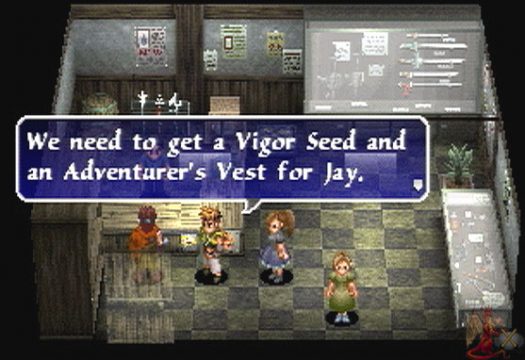 Jay is notorious for handing out busywork to keep idle hands entertained.

Many of the enemies in III are strong, and a couple with instant death abilities are very dangerous. Opponent AI seems to have been downgraded from the previous title though, with many enemies engaging in tactics that imply they have blinders on. Certain optional jobs are rather difficult to complete, as they sometimes depend upon minigame aptitude instead of battle skill, but getting through the mandatory portions will not be a challenge for tactical veterans. Doing everything can stretch the time spent past fifty hours, but rushing through can cut that time nearly in half.

The visuals in this game’s world are noticeably drabber than those in the previous game, which fits its society struggling to regain basic amenities quite well. Sprites are now realistically proportioned with a nice range of animations, though the amusingly detailed critical animations of II are a thing of the past. Environments are a bit bland when traversing large enclosed areas, and enemy sprites see quite a bit of palette swapping, but the refusal of the series to use many polygons even in 1999 means the game is much easier on the eyes now than many of its contemporaries.

Masahiro Andoh’s score has quite a variety of compositions, and most of them are effective at complementing the onscreen action. Multiple battle themes help prevent fights from feeling stale, and the composer’s attempts to touch on multiple musical genres work more often than not. Just as in the previous games, Working Designs left the battle-only voices in Japanese, but the performances suit the characters pretty well.

Working Designs definitely offered a great value with its Arc the Lad Collection, and the third game is most assuredly worth playing by anyone investigating the series. I can’t say it trumps everything else in the tactical realm, but in some ways it’s actually my favorite of this series. Most of the minigames are goofy and lighthearted enough to make experiencing all of them entertaining instead of frustrating, and the combat retains what was good about the previous title. It’s too darn bad the series is dead now.