Atlus and Vanillaware’s 13 Sentinels: Aegis Rim mesmerized many when it was released for the PlayStation 4 in 2020. Almost two years later, 13 Sentinels: Aegis Rim is still an easy recommendation. The Nintendo Switch port makes this excellent game available for even more players, with the peculiarities that this hybrid console offers.

Set in Japan, the game features characters from diverse timelines. The different points in time include 1945 and a distant, inhospitable future. The story is full of complexity, developing topics that include artificial intelligence, time travel, and more with impressive depth. The way in which the story is told is also notable and innovative as players take on the role of each character for brief moments and watch the events unfold from their eyes. The writing manages to keep players guessing as they get to understand the role of each character little by little; from different perspectives everyone looks to be trying to save the world or threatening it at the same time. The plot manages to be compelling throughout the game and leave players thirsty for more since most scenes end in a cliffhanger, including an astonishing and unexpected ending.

All the narrative elements are great, and the thirteen leading characters are no exception. Although they share the ability to pilot enormous robots called Sentinels to protect the world, they all have peculiar personalities and stories that make them likable and notably diverse. Most are initially perplexed by their strange dreams or memory issues, while others pull the strings, manipulating the rest of the cast. The majority of events take place in an academy, as teenagers obsessed with science fiction become the protagonists of such a story. Players witness the mundane lives of students eager to confess their love or anxious to eat yakisoba pan while they face threats that can destroy their homeland. The story does a great job portraying how innocent students entwine with sketchy people who have questionable intentions and goals. 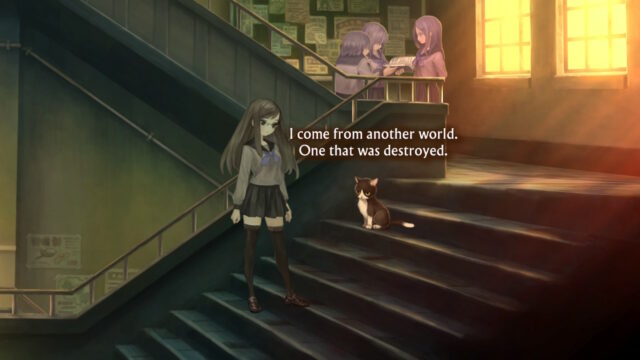 I forgot to mention, there is also a talking cat.

13 Sentinels: Aegis Rim is a mix of point-and-click-style adventure and strategy game. After the prologue, the game offers three distinctive modes to progress through. Destruction Mode is where players have tactical combats against kaijus; Remembrance Mode is where players witness the story by experiencing one of the main characters’ perspectives; and the Analysis Mode acts as a journal-slash-codex that lets players unlock information by using mystery points obtained after defeating enemies. Players need to progress in all modes to finish the game, with some episodes or battles locked until players have witnessed certain events or cleared enough combat missions. Although it is satisfying to decide whether to advance in the story or fight at any given time, this also makes the battles feel somehow disconnected from the story narratively. Even though there is a clear narrative link between the battles and the kaijus mentioned throughout the story, there’s no in-game reason why progress in one should be blocked by the other. Nevertheless, the gameplay is without any doubt ingenious thanks to these modes, and 13 Sentinels: Aegis Rim is extremely original.

The Remembrance Mode is where the game truly excels. Players are given freedom to choose the order in which they want to experience the characters’ stories. Each character’s arc has around eight chapters, yet some sections require players to have first advanced in others’ stories to be unlocked. Players control only the selected protagonist during these episodes, interacting with other characters and objects using the Thought Cloud. Within the Thought Cloud, they can contemplate some of their ideas or use them for some actions, such as giving a piece of information to another person. All of the episodes are varied and manage to make players connect with each protagonist. The game creates an immersive experience combining this with some light puzzle elements. For instance, a character becomes trapped in a time loop, which forces the player to try interacting with other characters or take a different train to gain a different outcome and progress. 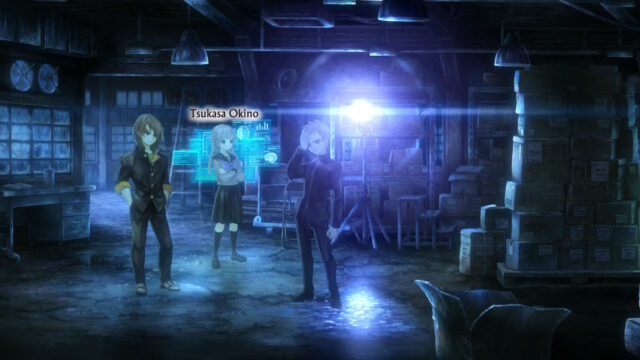 Some protagonists have constant headaches.

In Destruction Mode, players use their Sentinels to protect a core from several waves of kaiju attacks in different areas. It’s a real-time battle system, but time pauses while players select pilot abilities. For most battles, the objective is killing all enemies, but in boss battles, only some units need to be eliminated. Players select up to six out of the eponymous thirteen available Sentinels for the strike team. There are four types of Sentinels, each type represented by a number. Class 1 Sentinels are specialized in close combat, while other classes are better at other elements such as long distance attacks or swift movement. All pilots have abilities that can be unlocked and upgraded, and their Sentinels can also be powered up. While some abilities have a long range or a wide area of attack, others are considerably more powerful but only affect one unit.

Enemies fire missiles that target a pilot or the terminal; if the terminal is destroyed, players lose the battle. As a consequence, it’s important to keep an eye on the projectiles that aim for the terminal and attack them directly if needed. Not only are pilots satisfyingly varied in their abilities, but kaijus are too, including ground and flying units as well as others that create shields or that can only be pierced by certain attacks. It takes a little time for the battle system to connect, but once it does it’s great, and it gets more challenging and interesting as players have more battles with different enemy types. However, it feels that it lacks something to make it transcendent, with the tactical map-based respresentation not really conveying the full scale and ocassion of the fight.

13 Sentinels: Aegis Rim includes three different combat difficulties. Normal mode offers an enthralling experience that never gets too challenging but forces players to plan their actions, Easy mode for those who want to experience the story without suffering through battles, and Intense mode for those who want to face a real challenge. Battling is enjoyable on its own, but there are not nearly as many battles as there are story scenes, and this balance may not be the ideal one for players expecting a more action-focused game. 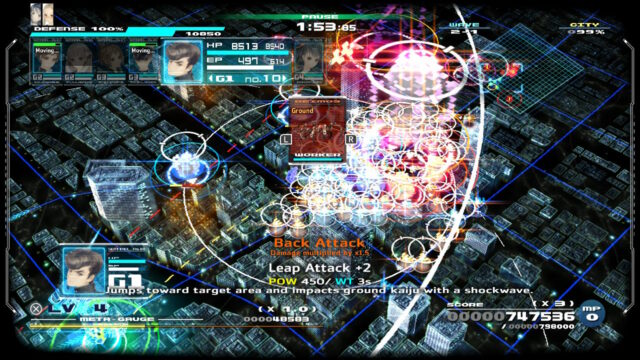 Some abilities affect wide areas and many foes.

Both the soundscape and the visuals help to make the game delightful. The English voice cast does a charming and convincing job. The sound effects and the use of reverb to create the illusion of desolated places or distant radio transmissions make the soundscape remarkable. Small touches are used effectively, such as how the game manages to make examining ideas different to normal dialogue. The music during the story mode creates a fitting vibe for the sights and dialogue, and the sound effects and background music of the battles are also of great quality. The 2D visuals have a peculiar style that matches the overall mood. Backgrounds are good, characters are lovely, and the different versions of the city readily make players feel that an apocalyptic event occurred — or might occur. The only complaint is that the visuals are not as inspiring and imposing during combat. Maybe a close up, additional animations, or more details in the enemies and Sentinels would make the battle system stand out even more for its visual impact.

13 Sentinels: Aegis Rim is a gem with fully justified award wins in 2020, and the Nintendo Switch port is a very welcome opportunity for more players to dive into its fantastic sci-fi story. While it’s light on the action, it’s a wholehearted recommendation for those who enjoy narrative adventures and RPGs in general.