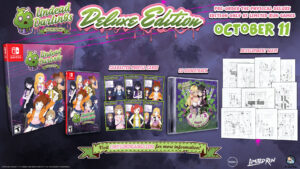 Undead Darlings follows the journey of one Reginald “Reggie” P Happenstahnce, who wakes up from an alcohol-induced coma in the middle of a zombie apocalypse. Reggie’s best friend Pearl has succumbed to the zombie virus but her human sanity has been kept intact. Reggie will find many other half-zombie girls in his adventure, who act as his shield against the horde of mindless monsters that inhabit the world while they search for the cure. The game released digitally for PC, PlayStation 4, and Nintendo Switch in 2020. Those looking to read more about Undead Darlings ~no cure for love~ can check out Paul Shkreli’s review of its Nintendo Switch version.