Meanwhile, Oceanhorn 2: Knights of the Lost Realm is available to order in a $39.99 Standard Edition for Nintendo Switch, or in a $74.99 Fan Bundle that also includes a physical Nintendo Switch copy of Oceanhorn: Monster of Uncharted Seas and a special slipcase that holds both games. The slipcase is also available to purchase separately for $9.99. Enclave HD pre-orders are open until October 23, 2022, while Oceanhorn 2 pre-orders are open until October 30, 2022. 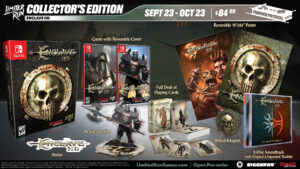 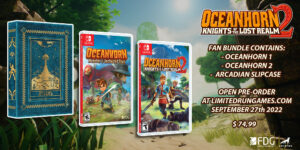 Enclave is a third-person action RPG developed by Starbreeze Studios with two separate story-driven campaigns where the player sides with the forces of Light or Darkness. The game features numerous character classes including Knights, Wizards, and Druids for Light, and Berserkers, Assassins, and Goblins for Darkness. It was originally released for Xbox in 2002, and later for PC in 2003, Nintendo Wii in 2012, Mac in 2013, and Linux in 2016. Ziggurat Interactive’s Enclave HD remaster features upgraded visuals and sound effects plus an enhanced soundtrack with over 20 new tracks and remastered original tracks. It is also planned to release digitally for PlayStation 4, Xbox One, and Nintendo Switch.

Cornfox & Bros.’s action RPG Oceanhorn 2: Knights of the Lost Realm originally launched for iOS on Apple Arcade in 2019, with a Nintendo Switch version released in 2020. The game is a prequel to Oceanhorn: Monster of Uncharted Seas and follows a young knight who journeys across Gaia with allies Trin and Gen to defend the people of Arcadia from the warlock Mesmeroth and his army. PC, PlayStation 5, and Xbox Series X|S versions were announced in 2021 but have not been dated.