Spirittea has ideas to be a fun and relaxing time and is worth keeping an eye on, but the demo is perhaps not the best demonstration of its potential.

There’s a form of comfort food for everyone.  A sub genre of RPG that is consistently comfortable is the farming sim.  Spirittea from Cheesemaster Games has all the gameplay markings of a farming sim at heart.  Between invisible timers and features locked behind the full version, the demo makes the game feel more like a management sim.  RPGamer was able to try out a demo ahead of its involvement in Steam Next Fest that talks about a lot about the game’s mechanics but sadly only gives players opportunity to experience a few of them.

The protagonist hops on a bus from a big city to go somewhere quaint and quiet to write their next novel.  Players choose their name and that of the town, while customizing their look.  Arriving in town, their landlord gives them a quick tour of a few places that will come into play in the full game before dropping them off at their house with a brief warning that something strange has been occurring in their quiet town lately.  After resting, the protagonist then goes to collect tea leaves to wake themselves up.  This is no ordinary tea though, it allows those with spiritual awareness to see ghosts.  Players are introduced to Wonyan, a cute but pushy cat spirit who complains about the previous owner of the house’s poor caretaking of the town’s spirits.  Wonyan manages to guilt the protagonist into tossing aside their writing aspirations to help the spirits.

Wonyan first tells the player to visit the bathhouse, which they find overgrown with weeds and vines and rundown from years of neglect.  Electing to restore it, the protagonist decides to become the new caretaker.  Most of the town is unavailable in the demo, while NPCs at most will detail what they will do in the full version.  The player’s first job is to obtain the key, which requires using Spirit Vision to see and then chase down the spirits that have it. 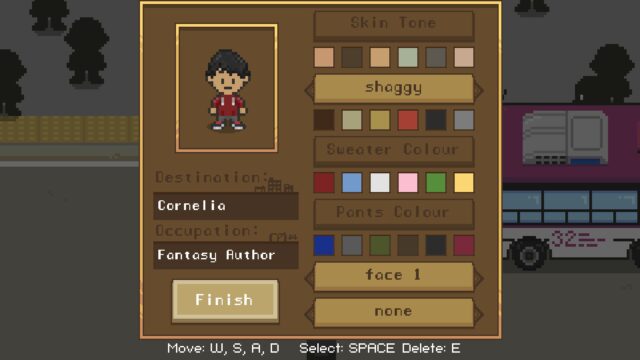 Once the key is obtained, the rest of the demo takes place in the bathhouse.  After setting up a fire to generate the hot water and cleaning the towels, players ring the bell to open the bathhouse to the spirits.  The rest of the demo is a routine of replacing the towels to supplement the unending line of spirits, while making sure the fire remains lit.  Wonyan mentions a lot of nuance in the game that isn’t in the demo.  For example, the happiness of the spirits is based on seasonal positioning, such as Spring spirits being happy beside Summer ones but growing agitated if placed beside a Fall spirit.  Wonyan also mentions that the player can help spirits have a better time by offering back rubs or altering the temperature.  The higher the happiness level the more money spirits leave the player.  All of this is unfortunately stated rather than shown, leaving the demo’s most engaging parts coming from the comedic banter between the protagonist and Wonyan.

With its very limited content, the demo leaves little impression of how Spirittea will actually play when it is completed.  The bathhouse routine feels cozy though players will have to keep on top of invisible timers, such as checking logs haven’t burned out and towels have finished drying. The controls are basic; sawing logs and washing towels are done by holding down the same interaction button for picking up and putting down items.  Items found around town are cumbersome to collect as each one has to physically be held by the protagonist first before being put away, adding to this there’s currently no descriptions or mention of what they do, leaving the interface with a lot to be worked on. 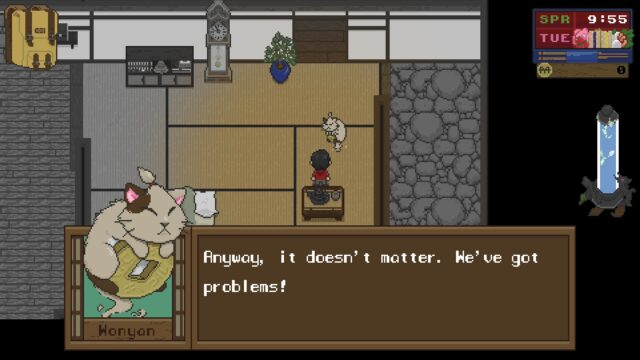 The music in Spirittea is very cozy, with warming vibes that help the player relax as they move around town.  The only urgency comes during the key chase, which is more adorable than actually tense.  There are lots of charming details in the visuals, such as the player’s hair bobbing around and Wonyan is the highlight of the demo as their snark and portrait are adorable.  It’s hard to read much into the variety of spirit types on offer as only two appear in the demo.

Spirittea has a lot going for it, with detailed inviting visuals, an elaborate system to get to know spirits and townsfolk alike, and intricate ways to make or lose money while trying to ensure the prosperity and happiness of all.  Spirittea has ideas to be a fun and relaxing time and is worth keeping an eye on, but the demo is perhaps not the best demonstration of its potential.  It gives a good sense of the game’s cozy atmosphere, but it’s too early to draw any true conclusions yet.