Although its exact connection to the Kingdom of Evermore from the main series is unclear, the setting of Cross Worlds is very much what players have come to expect from Ni no Kuni.

Level-5’s collaboration with Studio Ghibli for the Ni no Kuni series has certainly been a success and mobile-focused developer Netmarble has come on board to further build upon it with Ni no Kuni: Cross Worlds. The free-to-play MMORPG, which launched in Japan last year, is now about to get an international release with a new PC version joining the iOS and Android releases. RPGamer was given the opportunity to try out an early build of the game’s PC version and cross into another world.

Ni no Kuni: Cross Worlds is set in the near future, with players controlling a beta tester for a fully immersive virtual reality game called Soul Divers. After selecting one of five classes — Destroyer, Engineer, Rogue, Swordsman, and Witch — and customising their character’s appearance, players log in and quickly encounter an AI named Rania before a glitch sends them into a burning castle under attack from mysterious forces. Players make their way to the Nameless Kingdom’s queen, who identifies them as trustworthy enough to grant possession of the kingdom’s heart crystal and commands the Royal Protector Cluu to go with them to safety. Cluu and the player are then transported to the Kingdom of Evermore, where they seek aid to go and rescue the queen. 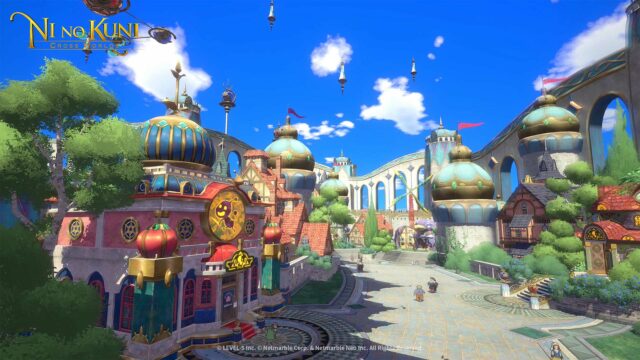 Cross Worlds’s setting is as colourful as series fans have come to expect.

Although its exact connection to the Kingdom of Evermore from the main series is unclear, the setting of Cross Worlds is very much what players have come to expect from Ni no Kuni. It’s packed full of bright colours, with plenty of pretty scenery and beings of all shapes and sizes. The round bat-like Cluu acts as the voice of the player and his commentary on everything, along with the quirkiness of other characters, helps pass the time in an otherwise routine opening. Players have to take on various requests to build their reputation to meet with Evermore’s king to beseech his help. The game’s first chapter is largely devoted to setting up all of the gameplay elements and it’s main story, which sees the mysterious forces expand their threat to include Evermore and the five World Keepers. However, it also drops numerous hints that this is far more than simply a game world. Evermore’s citizens show concern that a bunch of odd-acting outsiders have suddenly shown up, while Rania again appears to throw doubt on the motivations and goals of the company behind Soul Divers. How the story will shape out remains to be seen, but there’s plenty to grab the player’s interest in seeing where it goes.

One thing that is immediately striking is how much automation Netmarble grants to players. Selecting any quest — main or side — will allow the player character to automatically run to where they need to go, and if players choose the AI will happily handle combat as well. While the character is running to the next quest objective, players can feel comfortable using that time to tinker in menus, and any activated events will wait until they come out of the menus before starting. Players can expect to spend a fair amount of time in menus given the amount of notifications that popped up during my time with the preview. The automation doesn’t stop there, as the game will happily have the player character leap into battle entirely on their own, with the exception of taking an avoiding action on enemy attacks.

Combat itself is fast-paced but ultimately straightforward in its mechanics. Players have access to a single rapid regular attack, as well as six skills, with each of skill having its own individual cooldown timer. Three weapons can be equipped at a time and freely switched between, though each class only uses a single weapon type. The main idea for equipping and switching weapons is to have different elements in each slot, and to pick the weapon most effective against the current enemies. Players are also joined in combat by up to three familiars, which fight on their own and have their own element, plus a special attack players can activate with another cooldown after use. The difficulty in the early game is very low as players can readily plough through waves of enemies (automatically or manually) with even the early bosses causing very little trouble, but it remains to be seen if that theme carries on and how much the game’s collectible upgrades come into play. The one noteworthy thing that the automation will not cover in combat is avoiding enemy attacks, telegraphed with a red zone from which players will need to hit the roll button or run out of on their own accord. 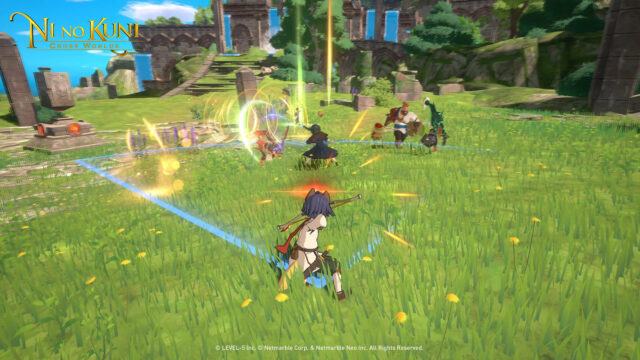 Players can choose to be involved or combat, or let the AI handle nearly all of it.

There are lots of ways for players to upgrade their characters’ abilities. Nearly everything has at least one form of upgrade mechanism that uses one or more of the game’s vast array of currency items. The game’s lottery mechanics come when players wish to acquire weapons, familiars, and costume items, though it’s hard to judge how obstructive they will be to later game progress. There’s definitely a lot of potential tasks to do and rewards for players to obtain. Simply filling out collections will grant players small stat boosts and numerous other minor achievements and tasks will grant items, currency, and more. There is definitely a potential for players to be overwhelmed by the sheer amount going on in the menus.

On top of this, Ni no Kuni: Cross World features its own Kingdom building feature that looks like it also offers the MMORPG’s primary social aspect. Once they’ve gotten through the first chapter, players are able to return to the Nameless Kingdom, which doesn’t appear on the world map, and start rebuilding it. The game introduces players to its various mechanics through a dedicated introductory kingdom, but once they graduate from this, they can create their own kingdom or join one set up by another player. The kingdom building content includes its own shops and a donation system that provides extra rewards, as well as special battles where players need to have set up defences in advance of an assault of waves of enemies.

It’s far too early to pass full judgment Ni no Kuni: Cross Worlds, but my initial time with the game has largely been positive. The presentation is strong; the partial voice acting meshes well with the colourful aesthetic, and Joe Hisaishi returns with some more excellent music tracks. While there are the definite trappings of mobile MMORPGs and it’s not yet clear how obtrusive any monetisation will turn out to be, Netmarble has done a fine job making a title that feels like it fits in with the rest of the series. RPGamers will be able to dive into the game themselves when it launches as a free-to-play title on PC, iOS, and Android on May 25, 2022.

Disclosure: This article is based on a preview build of the game provided by the publisher.