Pathfinder: Wrath of the Righteous Impression

Those seeking a great, epic adventure with countless options in character creation and combat have no shortage of reasons to be excited for the release of Pathfinder: Wrath of the Righteous, scheduled for release in September of this year.

In 2018, Owlcat Games released Pathfinder: Kingmaker, a computerized version of the Pathfinder pen-and-paper role-playing game. The game included multiple bugs and design issues, making it near impossible to actually complete. Over the following months, however, the developer worked hard to patch the game. Today, many RPGamers consider the title a solid entry for those seeking a deep, tactical RPG, so Owlcat Games is looking to leverage their experience with Pathfinder: Wrath of the Righteous. They recently released a beta build, giving players a preview of what is coming later this year.

The game kicks off with a robust character creation system where players can choose a pre-made avatar or build their hero from the ground up. The beta features around a dozen races and 25 classes, including five or more variations known as archetypes for each class. While a few of these existed in the prior game, returning players will find dozens of new options. Once the player picks a race, a class, and an archetype, many other decisions await, such as where to invest skill points and which feats to pick. Honestly, the combination of options is near endless, and players can spend hours just looking and deciding which options are most appealing.

After the story opens, other NPCs will join the party as the plot moves forward. Each of them brings their own unique perspective to the table about problems plaguing the town. They also fill various class roles, and after a few hours, the player has various NPCs to pick from to form a well-balanced team. From zen archer to shaman spirit hunter, Wrath of the Righteous go to great lengths to dip into some of the lesser-known archetypes not found in Kingmaker, giving players some very unorthodox and interesting ways to approach the game’s many obstacles. 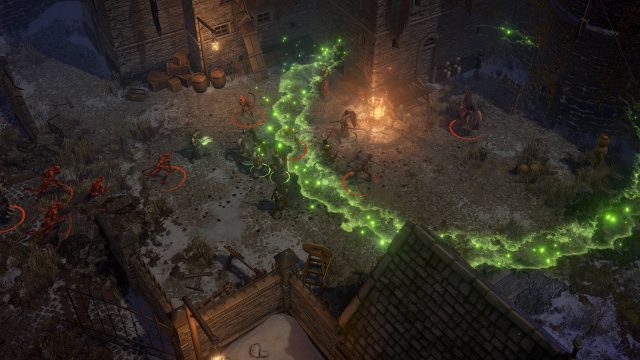 Even early on, fights feel quite epic.

Of course, most of the challenges the heroes face boil down to combat. When casting area-of-effect spells, the game shows clearly where the spell will land. Unfortunately, artificial intelligence still requires babysitting. For example, if grease covers part of the battlefield, commanders will have to micromanage their party to walk around the effect. Options exist that enable auto-pausing the real-time combat, giving players greater control over those fights when things get hectic. Yet, those who wish for ultimate control may opt to use the turn-based mode. With just one button, players can immediately switch the game from real-time to turn-based, even in the middle of a fight. Turn-based combat works extremely well, making the overall experience feel much closer to its pen-and-paper roots.

Plenty of opportunities present themselves for role-playing, including dialogue choices, skill choices, and problem solving. As the main plot progresses, players have choices that push them towards accepting a higher calling. Will the player make sacrifices for righteousness or go on a mad power grab to assert control necessary to win the day? The NPCs in the party express how they feel about these choices and make their own decisions accordingly.

Difficulty spikes in Pathfinder: Kingmaker, especially early on, caused many players consternation. Wrath of the Righteous offers a decent challenge for tougher encounters, yet feels like a smooth experience for the first dozen hours of gameplay. Set on normal, players still have to consider tactics and utilize crowd control for some of the more difficult encounters. For a more laid-back experience, the game offers numerous options to tailor the its challenge level. 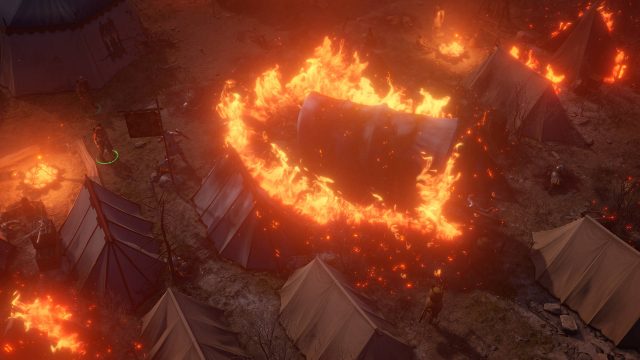 Oops. My sorcerer is a bit of a pyromaniac.

Aside from the increase in character creation options, two new features set this title apart from its predecessor. First, players eventually choose a mythic path. These thematic powersets not only place them above ordinary adventurers but equip them to face extremely powerful, demonic foes. In a way, these work as extra class levels, bringing their own sets of abilities. However, players earn these separately from their standard class levels. Next, players take on the role of crusade commanders, ordering huge armies to fight against the dark hordes. Owlcat has stated that they drew inspiration for this mode directly from the Heroes of Might and Magic series. Unfortunately, I did not make it far enough in the beta to experience either of these exciting features.

After spending nearly 20 hours in the beta, I feel like I have barely scratched the surface of what the game has to offer. Clearly, Owlcat Games seeks to create the ultimate computer adaptation of the Pathfinder pen-and-paper ruleset. Make no mistake, the addition of the mythic paths and crusade commander mode adds further depth to a game system already known for its daunting complexity. Those seeking a great, epic adventure with countless options and deep, tactical combat have no shortage of reasons to be excited for the release of Pathfinder: Wrath of the Righteous, scheduled for release in September of this year.

Disclosure: This article is based on free access to the game provided by the publisher.