It’s still early days, but Persona 5 Strikers’ opening stages indicate the story has exactly what most fans will want to see from a sequel and I’m greatly looking forward to seeing what the Phantom Thieves get up to in subsequent chapters.

It’s no real surprise that Atlus is making the most out of Persona 5. Having already received the rhythm game spin-off and its enhanced Royal version, North America and Europe now look forward to a collaboration between Atlus and Koei Tecmo’s Omega Force team that acts as the closest thing to a direct sequel that can expected. Atlus gave RPGamer the opportunity to check out the first part of Persona 5 Strikers on PlayStation 4, covering around six hours of gameplay and starting the Phantom Thieves on a new adventure that takes them across Japan.

Though Persona 5 Strikers is a distinct tale, players will definitely want to be familiar with the events of Persona 5, either through the game or its animated adaptation. The game begins in late July, with player character Joker returning to Tokyo to meet up with the Phantom Thieves and enjoy a shared summer vacation. However, a new Metaverse-related event puts the vacation plans on hold as icon Alice Hiiragi steals the Desires of the populace to fuel her rise to fame. Joker, Ryuji, and Morgana find themselves in the Metaverse after unexpectedly entering it through a new popular AI app called EMMA, but escape with the help of a girl named Sophia, who dubs herself “humanity’s companion” and turns out to be a self-aware AI lacking memories of her creation and history. After learning from another new character — Public Security officer Zenkichi Hasegawa — that they are the primary suspects for a number of similar incidents across Japan resembling their past deeds, the Phantom Thieves set out to prove their innocence, starting by putting a stop to Alice’s scheme.

Although the gameplay is different, the first chapter of Persona 5 Strikers largely follows a story structure similar to Persona 5, with the Phantom Thieves investigating their target’s version of the Metaverse, this time referred to as Jails, and doing some real-world investigating as well. The storytelling presentation is right out of the Persona 5 playbook, and if it weren’t for the vastly different combat system and lack of daily life elements, it really would come off as an out-and-out sequel. With the daily life elements being removed and the game not deeming it necessary to give a crash course in the Metaverse, Personas, etc., Strikers moves along rather quicker than the original 100-hour behemoth, with days happily progressing forward or holding up as the plot calls for it. 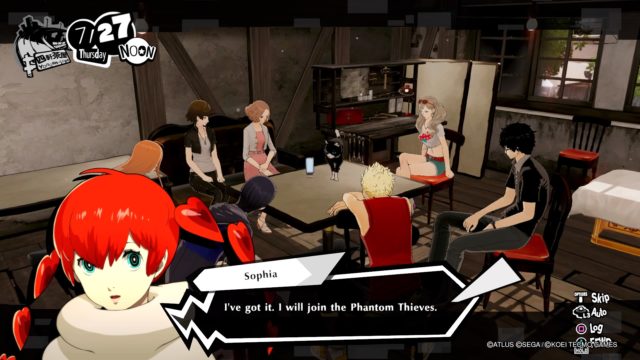 Sophia looks set to be a welcome new member of the Phantom Thieves.

It’s absolutely been a treat to see the Phantom Thieves interacting with each other again and a testament to how strong the cast is. The writing and localisation pick up at the same level fans have come to expect from the series, with interactions between the group confidently running the gamut from amusing to heartwarming to melancholic in line with the events at hand. Both Sophia and Zenkichi look set to be fascinating new characters, each having plenty of strong interactions with the cast even at this early point in the game. It’s still early days, but Persona 5 Strikers’ opening stages indicate the story has exactly what most fans will want to see from a sequel and I’m greatly looking forward to seeing what the Phantom Thieves get up to in subsequent chapters.

While the traditional crowds of enemies and fast-paced hack-and-slash combat of Omega Force’s Musou-hybrids are of course present, Persona 5 Strikers perhaps does the most work so far in sticking true to the combat elements of the original title. Each encounter is treated as an individual battle within an extended dungeon run, rather than the usual Musou format of short, distinct missions. Areas are more open to help accommodate the larger-scale action battles, but the familiar Palace infiltration elements are included. Players can ambush enemies by sneaking up from behind or leaping at them from the environment to gain a major early advantage, while the Third Eye lets them solve certain puzzles. Party members can’t be changed during combat, but players can freely Baton Pass to control a different character, and so far the AI is performing well in controlling the other three active members.

The traditional Musou regular and strong attack combos work as effectively as expected, with decent but not extreme variation between how the individual Phantom Thieves control. Persona 5 Strikers includes what Atlus refers to as pause-to-plan; by opening the item menu or preparing a Persona to use a skill, the game pauses, giving players the opportunity to consider their next move or current situation. Persona 5′s elemental and attack-type weakness system is fully implemented, as are gun attacks and the ability to launch powerful follow-up strikes on enemy weaknesses. In addition, players can make use of items in the environment: jumping up to a lamp post to swing down and hit all of the enemies congregated around it, or grabbing a skateboard from a rack to ride right through any nearby groups. The combat system has a lot of depth to it and it’s interesting to see how all of Persona 5′s elements translate into it, though with the sheer amount of options, it can be easy to get a bit muddled in the thick of things. 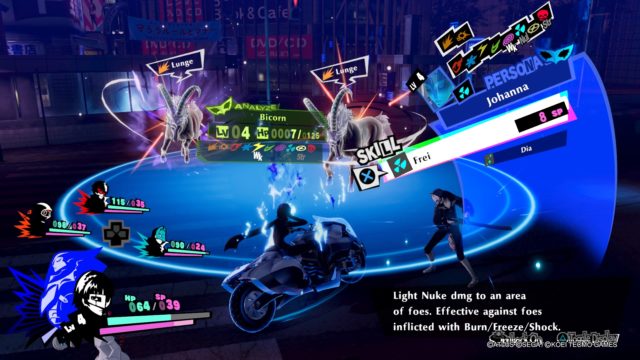 Persona 5 Strikers converts as much of the Persona 5 combat system as it can.

While the combat is a lot of fun, as one has come to expect from both contributing developers, some things drag it down in these early stages. The camera and its lock-on function aren’t as helpful as they could be and it’s easy to not see incoming attacks. This isn’t much of an issue for regular encounters, but it is a hindrance against stronger enemies, especially as it already feels harder to avoid enemy skills in Persona 5 Strikers than in other Omega Force collaborations. Meanwhile, SP is at a premium and restorative items start out very limited. Though the usual hack-and-slash may be all that’s needed for most regular battles, SP-using Persona skills are easily the most important attack option for boss fights, so going into a boss fight with reduced resources is asking for trouble. Players can at least freely leave the Metaverse from its numerous checkpoints and come straight back in with health and SP completely restored — and can also change difficulty at any time, including when retrying a lost fight — but forcing them to exit all the way out of the dungeon instead of the game simply letting the checkpoint act as a restore point just makes it take much longer than necessary. It’s entirely possible that character progression or greater familiarity with the combat system makes these less of an issue down the line, but that remains to be seen.

Social Links appear to have been removed in their entirety, being replaced by the Bond feature. As the Phantom Thieves’ bonds keep improving, players gain the ability to unlock more passive skills on the Bond table. Additional points are obtained by raising the Bond level through socialising events in the real world or battling in the Metaverse. Joker keeps his ability to switch Personas during combat, although he starts from the beginning with just Arsene in tow. The Persona Fusion system returns and while the absence of Social Links means the actual fusion is simplified and Masks are simply picked up from defeated enemies in place of demon negotiation, players can more easily level up specific Personas by spending points earned from combat. Equipment is also the same as Persona 5, with Sophia acting as the primary shopkeeper, using the convenience of internet ordering and express delivery to keep the Phantom Thieves stocked up. 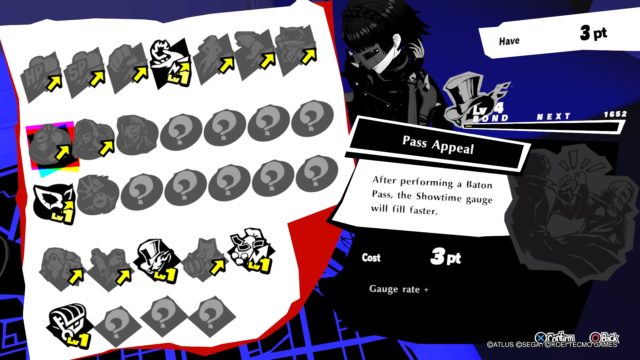 Social Links are gone, with the new Bond system acting as its closest replacement.

One thing that springs to mind when mentioning Persona 5 is stylish visuals, and Persona 5 Strikers makes sure to carry over both the general look and quality. The UI is crisp with lots of very pleasing animations and touches. The in-game models are less crisp than Persona 5 — largely due to poorer aliasing — but the designs still shine through. The cutscenes so far have been well directed, and the action in combat flows very nicely and looks impressive. All of the returning characters retain their voice actors from Persona 5 and are once again on top form along with the newcomers. Persona 5 Strikers features a mix of familiar and brand-new tracks, but the new ones feel right at home here, making sure the game is yet another audio treat.

The effort made to make Persona 5 Strikers as much like a dedicated sequel as possible is definitely in its favour and adds very welcome attachment to seeing where the story goes. While some parts have translated into the combat more effectively than others, Persona 5 Strikers’ success in emulating the narrative and visual sides has ensured that my interest is well and truly grabbed. The appeal of getting to spend more time with the Phantom Thieves has been very well realised so far, and I’m excited to see what they get up to elsewhere in Japan.