Specialist publisher Super Rare Games has announced a physical edition of SeithCG’s Ghost of a Tale. The edition will be available for Nintendo Switch and only 5,000 copies will be printed. Orders will open on November 26, 2020, at 6pm GMT (1pm EST/10am PST) through Super Rare Games’ website. The edition will include a full-colour manual, an exclusive sticker, and a pack of three trading cards. It will be available for around £27, not including tax and shipping.

Ghost of a Tale was initially released for PC in 2018, with PlayStation 4 and Xbox One versions released in 2019 and the Nintendo Switch version released in October 2020. It follows an anthropomorphic mouse named Tilo in a medieval world populated entirely by animal characters on a quest to find his true love Merra. The game features stealth elements, disguises, conversations with allies and enemies, and quests. Those looking to read more about the game can check out Pascal Tekaia’s recent review of the Nintendo Switch version. 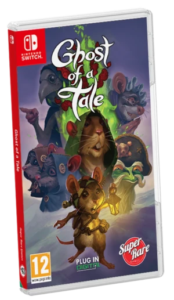