During its PAX Online panel, NIS America announced that it will be releasing action RPG Poison Control in North America and Europe. The game, released earlier this year in Japan as Shoujo Jigoku no Doku Musume, will be released for PlayStation 4 and Nintendo Switch in 2021. A limited edition is available to pre-order from NIS America’s North American and European online stores that includes: 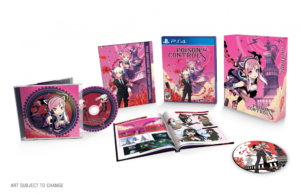 Poison Control is developed by the same team behind Penny-Punching Princess and The Princess Guide. The game sees spirits becoming trapped in manifestations of their own, with only Poisonette and her Soul Mate (the player) able to purify them. Players venture through the various “Belles’ Hells”, encountering those wishing to escape, as well as other characters and various twisted creatures.