Playstack has announced a physical release for action RPG Mortal Shell. The physical edition will launch in North America and Europe on October 2, 2020, through participating retailers, priced at $29.99/£29.99/€34.99. It will be available for PC, PlayStation 4, and Xbox One and include a fold-out poster and softcover art book, with the PC version including an Epic Games Store code in lieu of a disc. 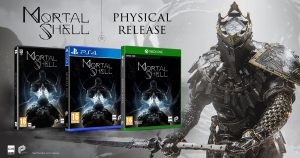 Mortal Shell is an action Souls-like RPG where players possess the bodies of fallen warriors, using their shells as they navigate and battle across a desolate world. Each shell has its own combat style, with new talents and upgrades becoming available as players’ connections with them grow. The game will launch digitally on August 18, 2020, for PC via the Epic Games Store, PlayStation 4, and Xbox One, priced at $29.99/£24.99/€29.99, with a Steam release to follow in 2021.