Many will appreciate the game’s efforts at building a narrative on top of the natural roguelite structure, while it combines its distinct style well with some strong animations.

11 bit studios and Dead Mage’s Children of Morta is a stylish roguelite released this year for PC, PlayStation 4, Xbox One, and most recently Nintendo Switch. With a compelling premise of a family tasked with guarding a mountain from corruption, unique fighting styles for each family member, and distinctive pixel art graphics and flowing animations, the game is another strong offering for fans of roguelites. However, its unfriendly difficulty curve and other small missteps prevent it from being a game that can claim much wider appeal.

Players control members of the Bergson family, who have taken on the role of Mount Morta’s guardians for many generations. As the game starts, corruption has been spreading out from the mountain. Upon investigation, the family matriarch determines that stopping it will require the family to venture into nearby dungeons and retrieve a set of special artifacts. This process sees players selecting a member of the Bergsons to head into a dungeon, advancing through it, and defeating the boss at the end. Fortunately, if they should fall in combat, the Bergson is teleported home thanks to a special crystal. 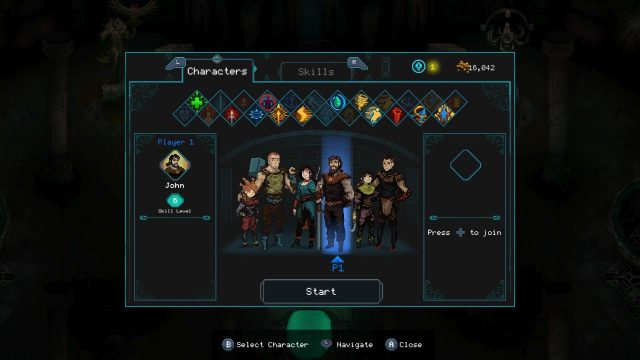 Players end up with six Bergsons to choose from for each run.

Players start with two characters, John and his eldest daughter Linda, but four more are unlocked as the game progresses. The game encourages players to mix up which characters they use, both in terms of a corruption mechanic that weakens characters until they are given sufficient rest, and by having certain level-up unlocks from individual characters benefit the entire family. Each character has his or her own combat style: John is a regular sword-and-shield fighter, his son Kevin is very much on the speedier side, and Linda fights from range with her bow, so players will need to adjust how they play depending on which character they choose for each run.

Combat is simple on the face of it, though this makes it easy to underestimate the challenge. All of the characters have a regular attack and a dodge, though only a couple of dodges can be used in quick succession. More abilities are unlocked as the characters level up; for example, Kevin can briefly turn invisible, while John can use his shield for a time to give him a bit more protection, but for the most part players will be simply trying to hit enemies while not getting hit themselves. There are special attacks that are very handy at times, but the cooldowns mean they aren’t something that can be fully relied upon. In addition to the bonuses gained from leveling, players can unlock stat boosts from Uncle Ben’s workshop and passive bonuses from the Book of Rea at the cost of money dropped by enemies or found in chests. 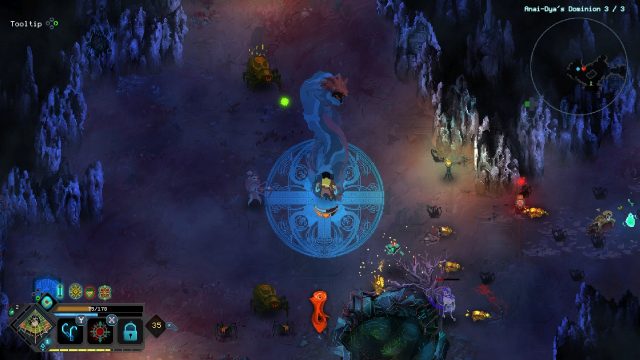 The Bergsons work their way through many, many caves.

Each run takes the chosen Bergson through a number of randomly-generated floors before ending in a challenging arena boss fight. Each floor hosts lots of enemies that players will need to deal with as they search for the next floor. Along the way, players will also find special side rooms, signified by a coloured barrier that enemies cannot pass through. Some of these rooms contain optional fights against tough enemies that lead into or form part of a side story, such as the Bergsons’ rescue and care of a wolf cub. Others include a luck-themed puzzle that can provide an artifact that will provide a helpful bonus or ability for the rest of the run.

Children of Morta aims to at least ensure even failed runs offer some semblance of progress, letting players keep the cash earned to spend it on upgrades as well as often providing new event scenes. Unfortunately, the punishing difficulty jumps in the early stages are just annoying and serve as a barrier to enjoyment. Rather than slowly ramping things up, the jumps between stages mean that players will spend several hours repeating the first couple of stages just to get strong enough to start advancing. Even the attempts to offer some recompense in the form of event scenes after runs, failed or successful, begin to grate, and some fairly substantial load times on the Nintendo Switch version don’t help matters. 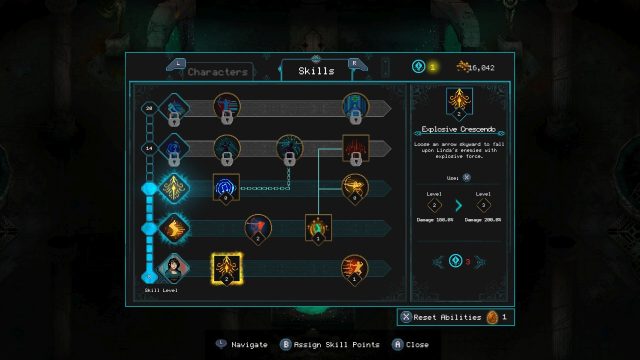 Leveling up unlocks a mixture of character-specific and family-wide bonuses and abilities.

The basic structure of combat is simple, but the animations help it look very nice. The development team does a great job making the pixel art flow gracefully and bringing the characters to life. However, the repetitive nature of the game means that environments get tiresome, while some enemies are unnecessarily hard to see in the darker areas of the game.

Children of Morta has a decent story behind it, and it does a good job of highlighting and building up the family bonds as well as showing their sense of duty. It’s a welcome fixture of proceedings rather than just the throwaway excuse for gameplay that many roguelites get. However, its effectiveness is a bit weakened by being told purely through a single narrator rather than letting the characters exhibit their personalities directly, meaning the game is more often telling rather than showing.

Children of Morta features plenty for roguelite fans to enjoy. Many will appreciate the game’s efforts at building a narrative on top of the natural roguelite structure, while it combines its distinct style well with some strong animations. Despite its attempts at providing some form of progress on even failed runs, its curiously-stacked early difficulty prevents it from being one to unreservedly recommend to newcomers, however.