I wasn’t entirely sure what to expect when sitting down to play Trials of Mana.  A cult classic only available via grey market means for many years, the classic Trials of Mana was only recently released for the first time in western markets on the Nintendo Switch, with a remake swiftly announced.  As the Secret of Mana remake left some wanting a more polished experience, what would this Trials of Mana remake bring to the table?  Turns out the answer is plenty. 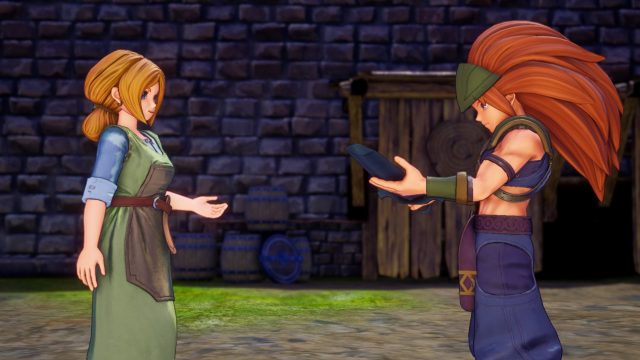 Before my adventure could begin, I flipped open the settings menu to see what the game had to offer, and again, the answer was plenty.  First, the game has four difficulties which it seems can be changed between at any time outside combat, including beginner, easy, normal, and hard.  Next, the game’s text is available in a variety of languages, including EFIGS and Japanese, with voice acting in both Japanese and English.  Players can choose between the traditional background music, or choose the new remake tracks, which are beautiful and easy to listen to.  There were also a variety of control options, including the ability to turn the mini-map display off and on, and to allow or prevent the mini-map from rotating.  For those who get easily lost, footsteps are left behind on the mini-map, showing where the player has already wandered.  Many different styles of gameplay preferences will be supported.

The demo picks up with the player controlling Duran.  A former knight at a prestigious castle, he let someone sneak in and left to seek both repentance and additional training before returning to his post. Currently trapped in a beastman town and not allowed to leave, Duran must talk to the local townspeople to figure out how to get away.  The answer is surprisingly simple: beastmen turn into beasts during the night, when they lose all their better judgement.  Simply taking a quick nap until evening descends means Duran can casually stroll out of the town’s front gate, as the erstwhile guards have wandered off to do whatever transformed beastmen do at night. 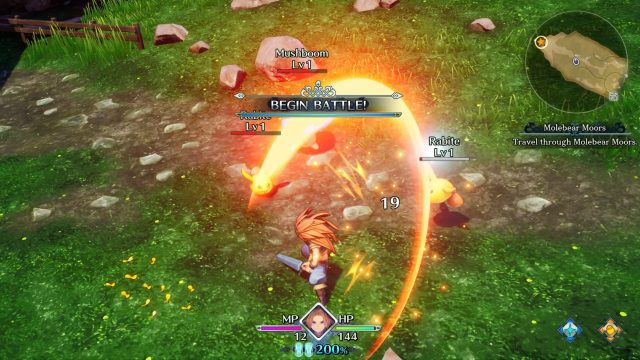 Once outside in the fields, the game introduces its action combat system, where combinations of circle, triangle, and x button presses will fire off specific attack combos.  Many rabites were slain in this process.  Becoming proficient at taking down enemies smoothly and quickly grants the player bonuses at the end of the battle, which accrue in a dedicated meter needed to launch special attacks.  Bonuses in the demo included defeating enemies within 10 seconds, without taking damage, finishing a battle with a class skill, and knocking down opponents, though there’s likely even more in the full game.  As players explore, more of the map is filled in, and enemies do respawn if the player leaves the immediate area for a period of time.  Fleeing is possible from most battles by simply pushing against the edge of the combat area until a circle fills.

It wasn’t long before a second party member, Riesz, joined the crew, as well as a third, Charlotte, strictly for demo purposes — she would not be available in that location during normal gameplay.  Assisted by two allies, Duran races into a nearby cave and is met by a giant enemy crab. It has two main powerful attacks, including an eye beam and a leaping crush.  Targeting the enemy’s head and destroying one of its eyes will disable the beam attack, while focusing on the front legs will ensure it no longer tries to crash down onto the party.  Alternatively, if the player is ridiculously powerful, the enemy can be defeated without disabling either of these attacks, though it’s probably far more challenging to do so in the full game. 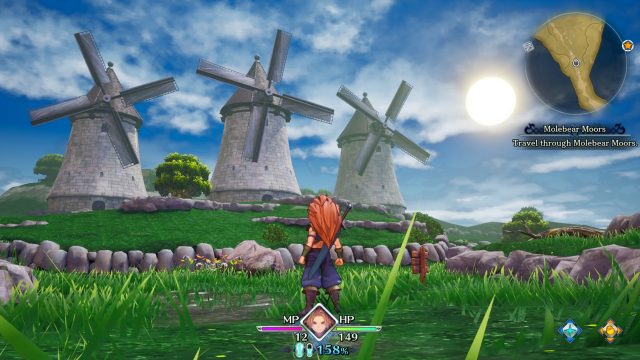 The fully remade Trials of Mana arrives in early 2020 on PlayStation 4 and Nintendo Switch and feels less like a remake and more like its own game.  Those wishing to dive into this adventure at least won’t have long to wait for an official release date.