Gritty mechanics work in concert with the apocalyptic tone to create a worthy challenge.

Games that look like they take place inside a book seem like an easy sell. People like games. People like books. Whatboy Games’ tactical deck-building RPG Trials of Fire is a sterling example of how presenting the game as an in-world artifact can double-down on its themes of fallen glory and hardscrabble gumption. The apocalyptic tome that serves as a portal to the world of Ashe includes a pop-up history, character information, and the hex maps where desperate heroes quest for survival. It reads like a boxed set for a tabletop role-playing game that was rescued from a burning library. Trials of Fire offers great challenges and a unique world ripe for exploration.

Play consists of moving a party of three adventurers across a scorched overworld, supplies dwindling, in search of quest objectives. The first of the two quests currently available involves the recovery of an elven water stone, which will allow a struggling community to survive. The finished game will include two more quests, one of which will be longer and more challenging than the two currently available. Like FTL, unlockables and procedurally-generated encounters flesh out the persistent quest framework. This isn’t a quest to plow through once, but a system to decode over multiple playthroughs. Along the way the party hits up towns, caves, and other shattered remnants of society. Encounters often include moral choices, which receive extra weight due to the scarcity of resources. Helping everyone who needs a few extra coins or basic supplies adds up fast, encouraging players to see who they are when the chips are down. 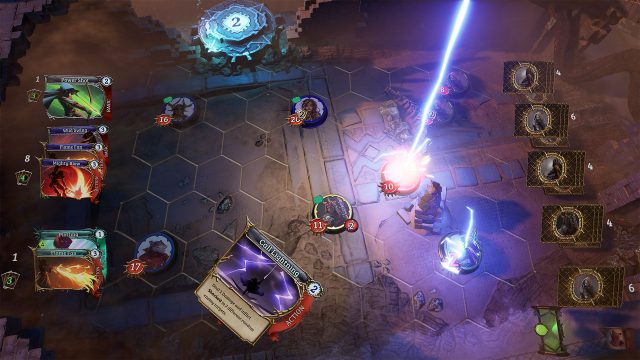 Ashe is a fine place to explore, but combat is the game’s leathery, careworn heart. Characters’ actions come from a personal deck of cards, which is based on their class and equipment. Deploying cards costs willpower, which is primarily gained by discarding cards. As a result, seizing an opportunity for one of the party’s three characters means taking resources from another character. As characters travel deeper into the waste, they can upgrade their decks with new equipment. Leveling up allows a character to replace one of the basic cards in their deck with more powerful, class-specific options. The game’s many subsystems feed into one another to create an elegant whole; getting out alive requires figuring out how they all tie together.

Like everything else in combat, movement requires a card. However, any character can discard a card for basic movement. Defense cards provide ablative armor, which decreases after every turn. Line of sight, area of effect attacks, and flanking bonuses make positioning important. If none of these options work out, a character can discard their hand a number of times based on the quality of their equipment. This isn’t always the wisest choice, as deck can also contain negative cards. 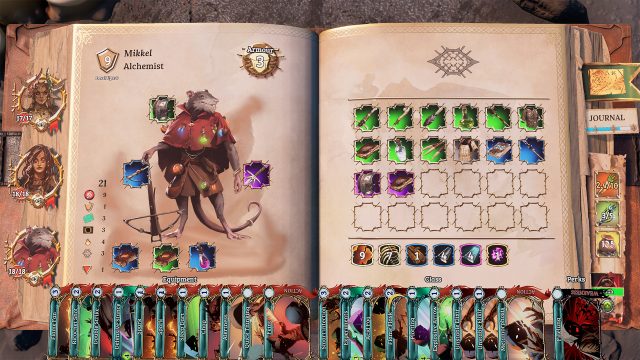 Combat feels similar to tabletop deck-building games and PC precursors like Card Hunter; Trials of Fire shows its unique character with its emphasis on long-term survival and resource management. Entering combat without being sufficiently rested adds Fatigue cards to heroes’ decks, while being reduced to zero health adds a permanent injury card like a broken arm or cracked skull. The injury can be removed at the cost of healing herbs, time, and supplies — none of which are abundant. Gritty mechanics work in concert with the apocalyptic tone to create a worthy challenge. Victories are hard-won, if at all. As the game continues to grow, it will be exciting to see how the challenges and character abilities escalate to keep tensions high.

Trials of Fire is available on Steam via Early Access. The full version will be available in the first quarter of 2020.