While the game is still in overall development, seeing this much polish on an early build is encouraging for the final product.

For over 1400 years, the Flaming Gate has remained sealed against the Netherkin.  Alas, that time has ended and four solid adventurers set out to once again re-seal this dangerous locale.  It’s really too bad they kind of died doing it, right?  As the child of two of those heroes, who’s inherited their tavern, you’ve got big stompy boots to fill. After all, ten years ago this tavern was the height of popularity and attracted adventurers from all corners of the lands.

Now…it sucks!  But don’t worry, you can make it better.

Epic Tavern is a cross between a tavern management time sim game and a D&D-style adventuring campaign.  Eschewing traditional gameplay like money and strength stats, the management half of the game runs on friendship points and quick thinking, while the adventuring half focuses on traditional mechanics like dice rolls smashed together with unique stats that make the game feel a lot more like an actual tabletop adventure than most games trying to capture that feel ever get close to. 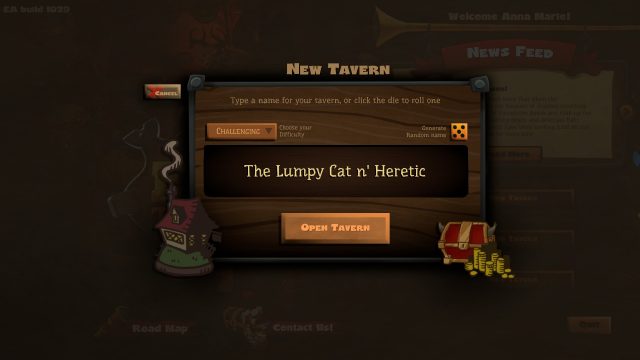 The tavern is the crossroads of all great stories, and yours can rise to greatness with some hard work and smart decisions.  A typical day at the “Ye Olde Nymph and Heretic” (the randomly generated name for the demo’s tavern) opens with a report, which gives a basic heads-up on current progress on the tavern management side.  From here, choose menu items, make any necessary repairs, purchase upgrades, and bask in the ability to manage a run-down pub onto its road to success.  Then the tavern opens for business.  Customers will slowly trickle in, each having their own taste in food and drink; serve them the same thing too often and your chances to please them get harder — roll a virtual 100-sided dice and hope you beat the needed number.  For those customers sitting at a communal table, players can try to combo together multiple successful services, with bonus friendship on the line for success.

Once final call has come and the drunkards are cut off, it’s time to head out into the field with quest assignments!  At the start, only two adventurers will follow the tavernkeeper’s requests, but as the tavern levels up by correctly serving beverages and food, more will be available during adventure segments.  Many quests will have more than one way to solve them — during a rat killing quest, options for poisoning them as well as beating them senseless were both presented, each of which would need different approaches.  Once the player is finished assigning heroes to quests both dubious and grand, adventuring begins. 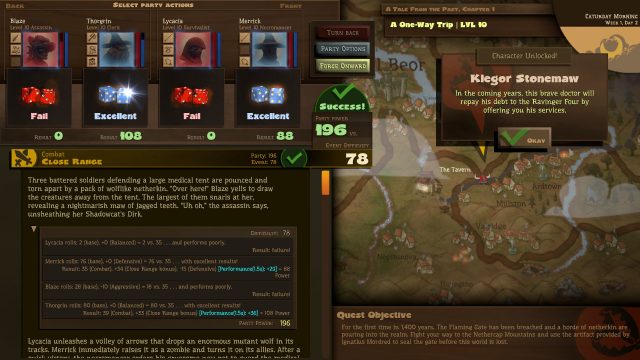 Each hero has four stats: Combat, Social, Mind, and Survival.  Each of these has further substats; for example, a character focused on combat could level up both melee and ranged attacks.  These atypical stats allow for unique playstyles that don’t focus on combat; this means spies aren’t required to stab people and can be mind-based, and bards can actually be…bard-ish, focusing on more social aspects of gameplay.  At each “stop” during an adventure, if an action needs to be resolved, players can choose how to handle things.  Choosing an aggressive mode would lower chances of success but increase the score put towards the goal’s total.  Playing defensively increased the chance of success, but added less to the goal’s total.  Surpassing the goal’s total meant succeeding in the event…though it didn’t always mean passing without any damage taken.

The demo taught an interesting lesson: it’s OK to fail!  Though sometimes rolls didn’t quite hit the mark and it is possible to kill heroes, that’s just fine.  With 150 heroes to choose from, losing characters and gaining others is simply a part of the adventure; that isn’t to say that loss is considered cavalierly by the other adventurers.  There are nearly 50 custom written characters with more complex interactions than the other 100 or so procedurally generated name/class combos.  If these characters lose a friend, they’ll talk about it and sincerely miss them.  It’s a nice touch. 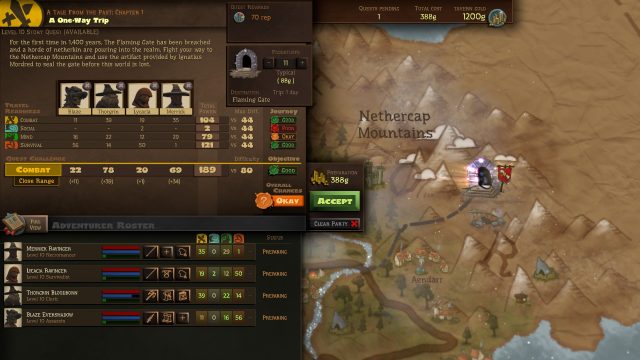 One thing that really struck me as great was the attention to small details the game had.  Helmets, moving along the map to demonstrate where heroes were adventuring, all have little feet underneath them.  As the tavern improves in level, it improves in appearance.  There’s also internal logic choices for things normally handled by DM hand-waving, such as characters healing.  While the game is still in overall development, seeing this much polish on an early build is encouraging for the final product.

Not shown in the demo but coming to the full game are many features, including more exploration encounters focusing on the survival stat and new difficulty levels.  Epic Tavern is currently available on Steam Early Access, with a Q1 2020 expected release.