Xenon Valkyrie+ is great at eliciting the desire to try and get even further after every game over.

I expected an easy ride from Xenon Valkyrie+ at first, though soon I was proven quite wrong. Beyond the cutesy anime girl on the game’s icon is a patience-testing experience. Xenon Valkyrie+ is an enjoyable challenge that is reminiscent of classics from the Nintendo Entertainment System era.

Very much like the games it harkens back to, the plot of Xenon Valkyrie+ is simple. The player must choose from one of three characters to explore the depths of the Moon. Deep within the Moon lies a malevolent witch who’s conjuring up an evil scheme. Whatever plans the witch may have need to be foiled by the player. It is a simple plot that works for a smaller game like this. This setup leaves room for more emphasis on the gameplay itself.

Xenon Valkyrie+ is a test of one’s patience and determination. Game overs are a common sight when learning the ropes, though they will become less frequent as the player gets better. As a rogue-lite much of the game is randomly-generated, including level layouts, loot, and enemy placements. This title stays true to those roots as its difficulty partly depends on what weapons are found. At times, there will be a stronger blade awaiting the player, but sometimes there will only be a sword that is marginally better. However, the difficulty also relies on the player’s skill and strategy. 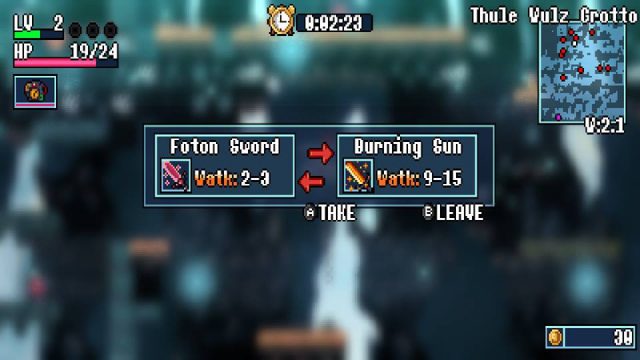 Players can swap their current weapon for a stronger one by unlocking white cases found in the levels.

In between each individual level, there is a section where the player can increase their character’s stats, replenish health, and restock on ammunition. Stats are increased by Talent Points which are awarded upon leveling up. The stats include Health, Attack, Maximum Ammo, and Defense. Replenishing health and ammo can also be done, which costs Cells, the game’s currency. The leveling mechanics work well in giving the player a sense of progress as their character gets stronger throughout the playthrough.

As far as combat goes, players are given a gun and sword to fight with. Guns come with limited ammo that can be refilled in the areas mentioned above. However, swords and guns are not the only tools players have. Players are given a limited number of grenades and an infinite amount of bombs, though the bombs do have a cooldown period. The arsenal given to players from the get-go is limited, which can make the early portions of runs a bit tiresome. Combat is as simple as a single button press, nothing more or less. There is not a whole lot of variety in fighting and it does get stale quickly. 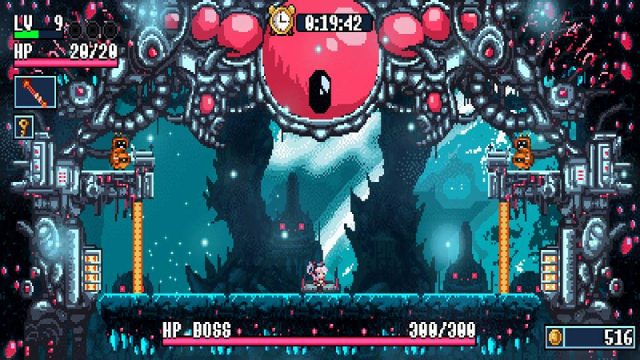 Quite a menacing boss for the first level.

The main draw is the trial-and-error nature of Xenon Valkyrie+. As one might expect of a rogue-lite, dying is a common experience, but Xenon Valkyrie+ is great at eliciting the desire to try and get even further after every game over. Even though the common frustrations of rogue-lites apply, they do not hamper the overall experience. An aiding factor in this case is the fact that after beating each level’s boss, their defeats carry over into every subsequent run. In addition, defeating the level boss and progressing to the next level allows for repairs on a transporter. In turn, the transporter enables players to skip past levels they have already beat. While these two are small features, they do a bit to mitigate the constant deaths and to reward the players for slaying a boss.

Actually completing Xenon Valkyrie+ is a tough proposition and not one achieved so far, but the game has proven to be a challenging and enjoyable experience. For a bite-sized adventure, it offers a decent amount of replay value, even if most of that comes from constantly dying and retrying. The game is far from being perfect, especially with the problems of stale combat. For what it is though, Xenon Valkyrie+ is a decent game that is well worth the cheap price-point.