In this installment, Joshua Carpenter plays 428: Shibuya Scramble, a visual novel that bounces between five different characters and wins him over with a delightfully droll sense of humor. Sometimes Famitsu hype is justified.

There are lots of games that are highly regarded but miss out on a western localization for one reason or another. The newest release from Spike Chunsoft, 428: Shibuya Scramble, appeared like it would be one of these. A “sound novel” that incorporates limited clips of video into its storytelling was originally released on the Nintendo Wii and garnered some attention by receiving a perfect 40/40 review in Famitsu. Despite the critical acclaim, it was launched in an era when games like Xenoblade Chronicles were struggling to get localized; a console exclusive visual novel never stood a chance. That’s why it came as a surprise when Spike Chunsoft announced it would finally get an English localization and launch on the PlayStation 4 and PC (via Steam). After taking nearly a decade to make it west, Shibuya Scramble has proven more than worth the wait.

The first thing that stands out about 428: Shibuya Scramble is its look. Rather than use illustrations to express its narrative, like virtually all other visual novels, 428 uses photographs of actors to supplement the story. The images are set upon the backdrop of one of Tokyo’s most vibrant neighborhoods and the locale plays a prominent role. The game does an incredible job of telling the story and fleshing out characters simply through the use of images. It’s truly an embodiment of the cliché “a picture is worth a thousand words.” These are mostly exaggerated characters and the actors playing them manage to bring them to life one still image at a time.

428: Shibuya Scramble involves the kidnapping of the daughter of a brilliant virologist. Her twin sister, Hitomi, is ordered to exchange the ransom in front of the Hachiko statue in Shibuya. While the police are ready to nab their man, a number of similarly-dressed foreigners show up and start passing off the attaché case with the ransom between them. In a scene reminiscent of The Thomas Crown Affair, while the police are busy chasing all the different members of the kidnapping conspiracy, they lose track of Hitomi. The player now follows the different paths of five different characters — Minorikawa, a reporter; Achi, the former local delinquent with a heart of gold; Kano, a police detective; Osawa, the father of the kidnapped girl; and Tama, a young woman suffering from amnesia who’s trapped in a cat mascot costume — bouncing between the characters’ timelines trying to solve the kidnapping and discover the greater mystery behind it.

The characters in 428 are incredibly entertaining to interact with and all of them have interesting and fun stories. Minorikawa’s route is especially entertaining as his hot-headedness, determination, and penchant for a pointing gesture reminiscent of a certain famous video game attorney make his screen time a delight. Moving beyond the main cast, many of the NPCs are a hoot to spend time with as well, especially Yanagishita whose endless supply of get-rich-quick schemes never fails to delight. He’s a walking internet meme machine and I love him.

The story plays out in an initially familiar visual novel progression, with walls of text occasionally interrupted by choices. However, because there are five different stories to follow, the game keeps players bouncing between characters by locking progress behind “keep out” signs until a point is reached with another character that allows the player to get through those roadblocks. Progress is also locked by numerous bad endings. These are sometimes dark, but often quite silly, such as an experimental version of a mascot suit malfunctioning and accidentally transporting characters to another dimension.

These bad ends are remedied by making a different choice, sometimes by that particular character, but other times a different character has to make a choice that prevents the bad ending from happening. These choices aren’t always obvious. For example, the detective choosing to catch a suspect leads to a bad ending as a result of him spending the rest of the day interrogating the suspect instead of following other leads. The system is reminiscent bouncing between timelines in Radiant Historia and, much like that game, there is an overall timeline view showing all the different points that can be jumped to where important decisions can be made. Each time a bad ending is reached, the game is generous in giving tips on what choices might have avoided that fate. 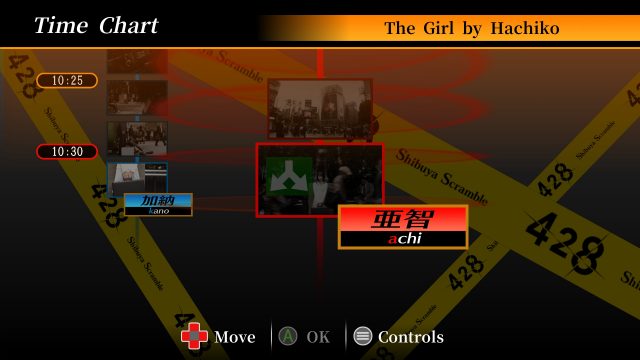 The timeline makes it easier to figure out where to jump to.

The game’s tip system is a key feature within the game. Occasionally words will be highlighted that can be selected for more information. Sometimes these will be a straightforward definition of terms, but often these are opportunities for interjecting background information and humor. These might include an explanation that “Yakuza bondage” simply refers to a person being held by the Yakuza and nothing more adult-oriented or that, despite her demure appearance, the waitress chewing out Minorikawa for smoking in a café spends her nights getting paid by men to yell at them. This sort of odd yet subtle humor is pervasive in 428.

I imagine that most western players will be unclear what makes a sound novel distinct in the visual novel genre. While visual novels usually have a soundtrack and often incorporate voice acting, 428 focuses heavily on sound effects and matching the music closely to the scenes. Tense moments are punctuated by rhythmic beats that could be pulled from a Hollywood thriller. Sometimes it’s more simple, with the sound of Minorikawa pounding on his keyboard against the din of a busy café. While there is no voice acting in the game, the expert use of music and effects help pull players into the experience.

There are a few flaws in this otherwise amazing visual novel. Despite having five different characters to follow, each with numerous choices to make in the hour-long chapters that the game is divided into, the story doesn’t branch much so it can feel as if one is stumbling toward the sole correct path rather than forging a unique experience. Also, parts of the late game combination of decisions required to reach the end are unclear and the game chooses this time to pull back on giving hints.

But those are really small gripes in what is otherwise an incredibly fun experience. Suffice to say that I’ve enjoyed every moment I’ve spent with 428: Shibuya Scramble. The characters are fun and interesting and I love the way individual narratives wove together into the whole. While it begins with some silly, lighthearted beats, the narrative builds to the point where the fate of Shibuya hangs on the decisions the player makes. I’m convinced that 428 is the best visual novel I’ve ever played. — Joshua Carpenter