Specters of the Past

Square Enix has been exploiting nostalgia for its older properties for years, and at first World of Final Fantasy Maxima appears to be following this trend. It features renditions of many characters and locales from prior Final Fantasy games, along with an appealing mechanic of capturing creatures that become party members. These creatures are mostly established ones from elsewhere in the voluminous franchise, and it might initially seem that the point is simply to experience old things in a new form. This game also has a narrative of its own, one that packs itself with filler and dunderheaded character moments before getting serious in an unearned way. I was fairly engrossed in some of the game mechanics, but the narrative went from being forgettable to actively aggravating, and that makes it tough to recommend.

Lann and Reynn are fraternal twin brother and sister, who attempt to go to work in a coffee shop one morning only to find no one else around. Soon one other soul appears, calling herself Enna Kros and asserting that she is God of this world. Enna Kros tasks the twins with using their unique ability to collect Mirage creatures, which are initially a surprise to them due to amnesia. Their goal is to resolve the troubles afflicting the world of Grymoire, a disparate place currently struggling with the encroachment of the Bahamutian Federation. Aided by a Mirage named Tama, the twins set out to collect more creatures and uncover the motivation of the mysterious Federation.

Most of the story sequences do not advance the overall narrative much, instead highlighting the interactions of the twins with Chibi-fied renditions of multiple characters from other Final Fantasy titles. Many sequences are intended to be comedic by making Lann and Tama into dunderheads who misunderstand words and ideas, something that is an extremely limited source of humor in this presentation. Tama also displays a unique speech pattern that appends the word ‘the’ unnecessarily to numerous other words, something that is supposed to be charming but is overdone to the point of being obnoxious. When the narrative finally gets more serious in its last quarter, the protagonists also become less sympathetic thanks to some unpleasant revelations. Hiroki Chiba is credited as both the director and scenario writer of the game, leaving little doubt as to where the responsibility lies. 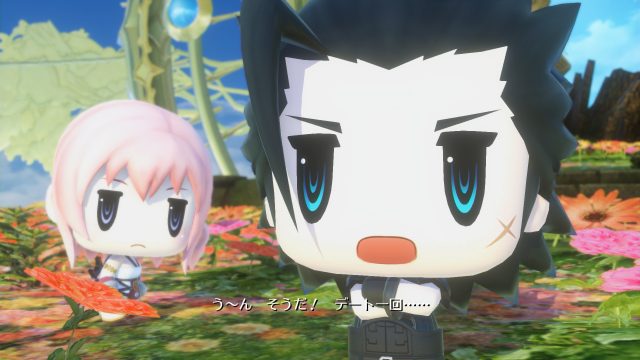 What the heck is wrong with your eyes?

At least Square Enix’s localization team stuffed some entertaining text into the margins. The townsfolk and side missions involving protagonists from past Final Fantasy titles are generally more interesting than the overarching tale, and descriptions of monsters sneak quite a few bits of amusing banter into the rest of the words. Much of this material requires a bit of dedication to find, but it’s interesting enough to be worthwhile.

Battling adversaries uses the tried and true ATB system against randomly encountered adversaries. A couple of new twists make things unique, starting with the use of AP for all abilities. Action Points are different than MP because no character can have more than twelve of them at a time, and they gradually regenerate instead of requiring a rest. AP changes the flow of combat somewhat by making it difficult to use the same ability successively, yet also allowing costly techniques to be employed on a regular basis.

More visibly distinct is the fact that Reynn and Lann are surrounded by Mirages when they enter a fight, and putting them into a stack with the creatures is a much more effective method than having the participants remain separate. Stacks are composed of three component characters, and lumping them into a single unit allows access to the entire repertoire of all. It also combines the statistics of the participants and makes them more survivable in combat. Along with this mechanic comes a new status ailment, as repeated blows will detract from structural stability until the stack comes crashing down. It may present a bizarre visual, but stacking is an interesting and rewarding system to investigate. 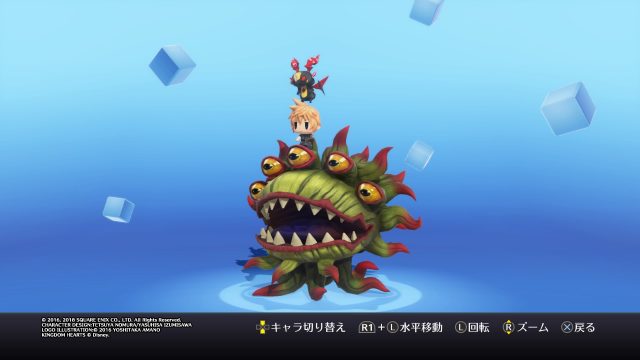 What a nice Malboro — it probably isn’t comfortable to have two things standing on its eye.

Getting Mirages to join Lann and Reynn on their journey is a complex procedure that varies wildly. Unlike Pokemon, simply damaging the creature isn’t always the means to allow a capture. Sometimes a specific type of attack is necessary, or the infliction of a particular status ailment, and numerous other methods as well. Quite a few options to form a party exist once the player spends some time investigating the possibilities. The Mirages also allow for a measure of customization, since each of them has a few ability slots that can be filled with whatever the player has available, though the bulk of development must incorporate innate and requisite techniques.

World of Final Fantasy could have used a smaller quantity of inventory components. The function of everything is cleanly displayed, but the sheer quantity of material that needs to be delved into makes the procedure time-consuming. As an odd complement to the inventory management time, using the fast-forward function to speed battle along helps enormously, for without it long periods of waiting for another combatant’s turn to appear would be constant. In a possible homage to the PlayStation entries of the series, areas are often confounding when it comes to determining where the player can travel. A mini-map that is usually onscreen mitigates this, but this still requires looking at something other than the dungeon itself in order to divine what is passable.

Shopping is a fairly straightforward affair, since there are no weapons or any kind of statistic-altering equipment to procure. Navigating through the shop menu becomes time-consuming thanks to its single category of goods that everything purchasable is classified under, but otherwise effective. An oddity stems from exactly one shop existing in the entire game, which makes the abundance of fast-travel options mandatory for the frequent trips back to it. 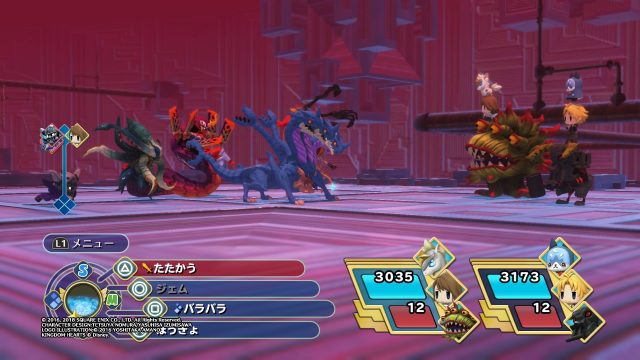 If you’ve ever tried ATB in any form, this shouldn’t be difficult to grasp.

The twins can shift between Jiant and Lillikin size whenever the player wishes, which matters in terms of gameplay mainly for the different Mirages with which they can be stacked. Almost every other character in Grymoire is a Lillikin, something that looks akin to a Funko Pop figure with an even more disproportionately huge head. Square Enix’s graphical prowess ensures that everything looks impressive, but the appearance of Lillikins is more unnerving than cute due to the weird construction of their eyes, which don’t have standard irises and pupils. Cutscenes present Reynn and Lann seemingly at random in their Jiant and Lillikin forms, which makes no sense when Jiants are supposed to be vanished from Grymoire and there is no consistent reaction from NPCs to this.

Questionable as the graphical style often is, its presentation is nevertheless top-notch. A few sequences are depicted using animation, but the vast majority are presented using the in-game graphical engine. Most of the dungeons may not stretch into novel conceptual territory, but they are nevertheless impressive to behold. Like most titles that come from Square Enix, this one’s visual polish is undeniable.

Masashi Hamauzu has the sole music credit, even though much of the soundtrack contains new renditions of tracks from earlier Final Fantasy titles that he did not originally compose. The new renditions are nevertheless effective and quite catchy, though some aren’t heard enough. New compositions are a somewhat more mixed bag, with many that are quite pleasant covering for a few that are completely unremarkable. As to the extensive vocal performances, none of the actors turn in a poor piece of vocal work even though the material they are given is rarely top-notch. 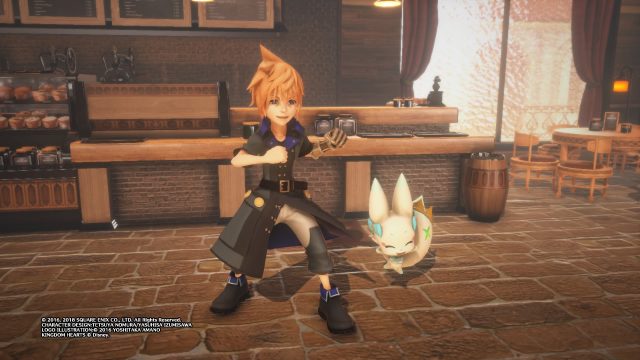 It’s a little hard to get behind two nincompoops who rub it in at every opportunity.

Some new content has been added to differentiate the Maxima rendition of World of Final Fantasy, though none of it makes a dramatic difference. Additional Coliseum engagements, a few new Mirages and some interesting side stories with Final Fantasy characters unseen in the rest of the game are on offer. The most interesting material is that featuring some additional stalwarts from past entries, but unfortunately it is mostly locked away until the game is beaten. Completion time for someone attempting to blast through the game is probably around thirty hours, but since the ancillary content is frequently worth experiencing, fifty or so hours is probably more realistic.

I can’t think of any other games in which I deliberately shrank my protagonists so that they could each fit in a stack between two other creatures, so World of Final Fantasy Maxima definitely gets credit for exploiting an unseen niche. Actually playing it was also entertaining, though every time I progressed with the overall narrative frustration resulted. Square Enix’s track record in recent years has been a highly mixed bag of quality, and World of Final Fantasy Maxima fits right in.