There’s enough about the store pages for Woodsalt, the debut title from indie developer Team Woodsalt, to attract some decent interest. Its setting comes with plenty of interesting ideas, but they necessitate a strong execution. Unfortunately, that execution is sadly lacking here, as those ideas fall down due to a lack of support from the rest of the game and they simply aren’t strong enough to carry things on their own.

The game follows Emcy, who wakes up in a bubble town on the world of Nu-Terra. Along with many others, Emcy has been in stasis for a thousand years after the evacuation of Earth. Upon waking up, Emcy is greeted by his younger sister, who is technically now his older sister as she was awakened some years before in order for her expertise to be used on Nu-Terra as it awaits the news that Earth is safe to return to. While Emcy recovers from his awakening, with side effects that include bizarre visions and dreams, and waits to hear what role he was awakened to fill, he spends his time learning more about Nu-Terra and building relationships with the other inhabitants. 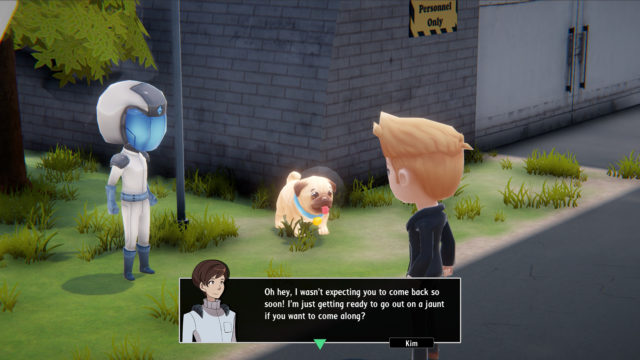 Woodsalt is all about getting involved in NPC stories, which determine how the plot resolves.

Those expecting any substantial gameplay mechanics won’t find any here. Woodsalt is entirely a narrative adventure title where players spend all of their time walking around, talking to other characters, and viewing events. During each day Emcy can explore the town, but his main action is advance the stories of various NPCs, activated by interacting with ghostly versions of their character models that appear in specific spots. Each day, Emcy can advance two character stories before he gets tired and must return to bed.

There are a lot of interesting ideas and questions ripe for deeper examination, but nearly all of it is only superficially considered in favour of the NPCs’ personal issues. Woodsalt does a good job presenting some of the arguments around the concerns between returning to Earth and trying to build a new life on Nu-Terra, but the overall plot is far too obtuse for its own good. The game fails to produce any satisfying conclusions and ultimately ends up as a jumble of grand sci-fi ideas that aren’t justified by the build-up. The pacing is also poor; the beginning and end feature some rapid-fire plot advancement, but the middle is full of periods of nothingness that fail to develop the setting or provide adequate lead-up to the finale. There’s nowhere near enough days available to go through all of the stories in one go and it’s a game that clearly wants multiple playthroughs for players to see everything, but it fails to provide any real impetus to do so.

Despite having very little in the amount of gameplay, the little that actually is there becomes one of the biggest barriers to enjoyment. After players have been around Nu-Terra once, they’ve seen all there is to see and any following wandering serves no purpose. The non-story NPCs don’t have anything useful to contribute and say the same thing day after day, and there are no interesting interactions outside of advancing the stories. Meanwhile, the performance on Nintendo Switch is fairly poor; the load times are too long and the game is prone to crashing during them, though an autosave means that almost no actual progress is lost. It’s also annoying that there is no cancel button. Both A and B act as confirm, which often leads to unintentional selections. 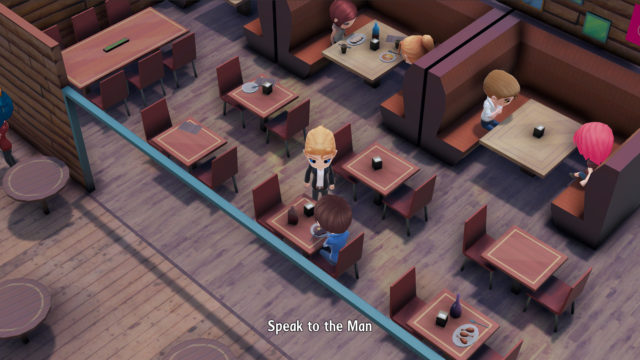 Players get to wander around town, but that’s about it.

The chibi character models look ok, but the generic environment designs fail to give Nu-Terra any character and cause it to come across as a pleasant but boring place. The style also rather dilutes the times when events get truly serious, particularly the climactic scenes when blood starts flowing. Animations are also lacking, which is especially evident when characters sit or get up, with the models simply phasing in and out. The game lacks voice acting, but feels perfectly fine without it, while the music is repetitive and doesn’t contribute much at all to the experience.

Woodsalt feels like something whose ideas would have been better served as a visual novel. The sparse gameplay that is there is so superficial that it ends up detracting from the experience. It’s at least respectful of the player’s time in that one can easily get a playthrough done in well under ten hours, but even then it’s very hard to recommend.