Every now and then a game comes out of nowhere to surprise you. For me, the most recent title to do this is Victor Vran, a Diablo-style third-person looter with a quirky sense of humor and very little padding to get in the way of its core gameplay loop. While the name might not be super catchy or memorable, the contents of the game itself make up for that.

While RPGs are typically a genre where plot is crucial, there are times when the story is simply a vehicle for progression, and that is absolutely the case with Victor Vran. It’s not that the narrative is awful, but more that the developers seemed to understand that the appeal of this project was less about wading through endless dialogue and more about wading through all of the corpses left in the wake of the titular Victor Vran. As one of the last hunters, Victor steps into the kingdom of Zagoravia looking to find his lost friend and quickly becomes the last hope for the doomed land.

During his exploration, he’s set upon by a mysterious, disembodied entity simply called The Voice, who urges him along while at the same time taunting him with silly, over-the-top dialogue that often includes random pop culture references. These don’t seem as annoying as they do in other games or as out of place as they perhaps should, because they seem to fit the quirky feel of the rest of the experience. After all, the game includes DLC all about the band Motörhead, jumping between a war-torn WWII landscape and the Wild West, and has players fighting a demon train called the Orgasmatron. It seems obvious that the devs were taking a subgenre usually bogged down in seriousness and just saying “screw it” by adding whatever seemed cool at the time. The best part is that it works. 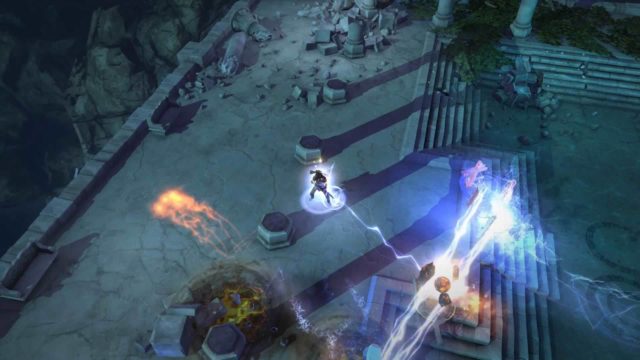 Tesla would love this.

As stated earlier, there is very little fat here, as Victor Vran gets right to the action and keeps that combat cycle moving. There’s a central hub where players can buy and sell loot, talk to the game’s few NPCs, and then decide where to venture off to next. There are several large areas to explore, each with multiple smaller dungeons within them. Well designed maps with good encounter variety make it hard to get lost and allow for enjoyable roaming without repetition kicking in. Regardless of size, every locale comes with a set of five optional challenges to complete, such as finding a certain number of hidden chests, defeating a certain amount of foes, or hunting down and beating a named mini-boss. While not required, these challenges are typically easy to tackle throughout the normal exploration of an area and their completion is rewarded with a literal explosion of loot as a banner drops from the sky while gold, items, or experience points gush forth in a most satisfying way.

Any third-person looter worth its salt keeps the upgrades coming at a steady pace. Victor Vran doesn’t do as much in terms of character skill customization, focusing instead on new equipment as the main method of improvement. There are different weapon types, each offering a standard attack and two special moves. The variety comes from all of the weapons available, as there are swords, rapiers, scythes, shotguns, lightning guns, hammers, and even the Motörhead expansion’s guitars that fire skulls, just to name a few. Each weapon has other bonuses, such as life drain, power boost, stronger knockback, and so on. The loot system allows for a great deal of variety in gameplay and is helped by the fact that Victor can equip two weapons of any type to quickly swap between. Along with jumping, dodge rolling, and attacking, Victor also has a powerful overdrive ability that can only be used when a bar has been filled. With all of these abilities and the vast amount of equipment Victor can get, customization is very flexible and offers lots of variety. 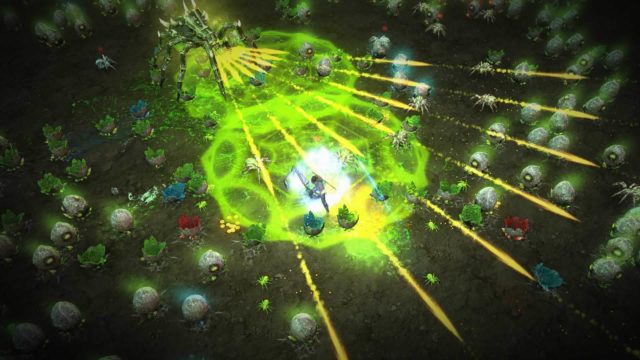 The game is paced fairly well throughout, never overstaying its welcome. The main story can be completed in around ten hours with optional dungeons, expert challenges, and the DLC included with the console releases bumping that time up much higher if desired. The Motörhead: Through the Ages DLC offers a new adventure in a crazy setting, while the Fractured Worlds pack focuses on adding high-level content, new equipment, and tons of randomly generated areas for those who just want more to do. There is also online co-op, and while that wasn’t experienced during this playthrough, it appears easy enough to access, though will be dependent upon the console player base.

Victor Vran‘s visuals are mixed as things are dark in dungeons, yet colorful in combat. There’s little to make it stand out as dungeons are the main focal point of exploration, but it’s far from problematic as things get bright and colorful when battles are happening, which makes things more cheerful. The game’s music is serviceable as well, though it’s the voice acting that’s slightly more notable as it stars Doug Cockle of The Witcher fame as Victor. The voice actor does little to differentiate himself in this role from his prior work as Geralt, but perhaps that’s the point. The Voice who accompanies Victor is much more prominent, as he’s constantly talking throughout the game and does a solid job of being mysterious.

The entirety of Victor Vran is an unusual experience, as it seems like the developers approached this with a devil-may-care attitude, but it works for the best here. There are no drawn-out narrative sections, just a solid focus on what’s fun. The loot grind is wonderfully paced and combat is solid throughout, which makes it super easy to get into. It might lack the depth or polish of bigger name titles, but the fact that it cuts out the overhead only helps the experience. Victor Vran might not be the most memorable title from a marketing standpoint, but it’s a game I’ll remember for quite some time. 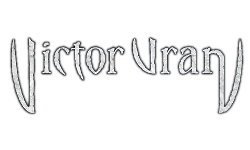