What’s in a game name? That which we call nonsense by any other name would still be a little odd. Created by the Square Enix team behind the Bravely series and Octopath Traveler, Various Daylife offers a console-style JRPG experience in the mobile space.  However, while the game has ample interesting and fun ideas, it’s bogged down by poor pacing, a high degree of unpredictable randomness, and multiple tedious barriers to enjoyment.

Landing on a newly populated continent with the seventh wave of settlers, the main character quickly chooses to join an exploration team, and the members show them the ropes of daily life in these harsh foreign lands.  Players will spend the majority of their time in this city hub, experiencing the titular varied daily life.  The bulk of the hero’s time will be spent training by completing tasks taught to them by an expanding cast of characters.  For example, the first character the player meets is Bruno, who teaches the warrior class, and then gives four warrior tasks.  Some tasks can only be performed during the day, while others require the cover of night, though most having no time requirement.  Players choose which activity to pursue, which drains a certain amount of the hero’s stamina and mood based on the difficulty of the job.  As stamina becomes depleted, jobs become more dangerous and the chance the hapless hero will pass out rises; conversely, as mood is exhausted, the greater the chance the job will be failed. 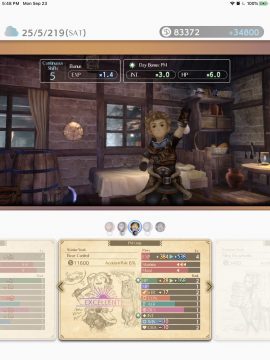 Balancing mood, stamina, and bonus multipliers can help the hero level up quickly.

Replenishing both mood and stamina can be done by sleeping for a period of time, though this will break the consecutive work combo the player has built.  For those who want to maintain this experience booster, various facilities will unlock around the city to restore both stamina and mood, such as places to eat and numerous locales to visit with party members and relax.  Failing a mission due to poor mood reduces the monetary reward to 10%, while completing a mission in a good mood may double the monetary reward or better.  Passing out punishes the player with a minimum of four days of rest, while also decreasing the progress in each stat by 10-20% each day, so managing both mood and stamina is extremely important.

As the hero completes missions, they will earn points in stats such as strength, intellect, HP and MP; once enough points are accrued, the stat will level up, awarding permanent increases.  Players will need to balance which jobs they take, as most days have a multiplier associated with two stats, and this potential boon can cut both ways: if a player chooses a job which decreases a specific stat’s progress bar, the negative value will be multiplied the same as a positive value.  Players will also have the opportunity to unlock additional jobs for each party member, and to trigger new types of work and abilities to learn, the hero will need to choose to perform work tasked by that specific character — so if Gilda has unlocked the hunter class, performing any task from either her original scholar class or new hunter class will trigger new work options for the hero.  It sounds complicated being explained all at once, but this is all gradually introduced to the player over several hours, allowing ample time to become accustomed to each new facet being introduced into the work and leveling system.  Increasing an ally’s levels is far simpler — pay money, spend a few days, one level up complete.

When not taking on tasks to raise money, the hero and their party of explorers can go out on adventures — but before heading out, players should be sure to equip their characters with the best gear available.  Unfortunately, like so many aspects of Various Daylife, equipment is aggravating to manage.  When the player goes into the equipment shops, weapons are divided by class, with the hero character set as the default, even for jobs they are not currently holding, instead of the party member which actually has it active.  Once an item is purchased, players must open the menu, choose equipment, choose the character, choose the slot, choose the item, then confirm the selection.  Equipping upon purchase has been a standard in RPGs for years, so to dive through menus repeatedly, with an extra confirmation step, is yet another example of the poor planning evident in Various Daylife.

Adventures take a minimum number of days ranging from one to ten, and involve watching the party walk from left to right while a progress meter fills, with short interruptions for using abilities and enemy encounters.  For example, having a chef in the party means a frying pan icon will occasionally pop up — repeatedly tapping it will provide the player with food to consume during their journey.  As the player walks along, their characters’ maximum HP will deplete, and this can only be restored with food.  However, as an adventure progresses, food will slowly but surely rot; how quickly food spoils depends on a number of factors, including whether the food is considered best for the location, whether it is liquid or solid, and the weather in the party’s current location.  Inclement weather such as rain, firestorms, or high winds makes food spoil faster. 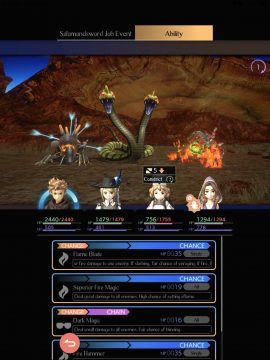 Managing changes, chains, and chances is integral to success in combat.

As each outing progresses, enemy encounters will pop up to challenge the party.  Each character can unlock up to three classes with four abilities each, and stacking debuffs build up a combo meter which can be used to execute a powerful attack.  How these effects interact is static, so players will simply need to learn how each matches up.  The ability to move between debuffs gives the player a unique mechanic that makes combat shine, and it is by far the most interesting part of the combat.  Unfortunately, attacks are maxed out at 999, with a single class allowing the party to temporarily go above that limit to 9999 instead, but as this buff only lasts for three actions, learning how to manage long attack chains is absolutely mandatory.  Much like a lot of aspects of Various Daylife, managing current and maximum health along with maximum damage output during adventures is an idea that sounds interesting on paper but, with numerous random aspects, is vexing to manage.

Rumours can boost a variety of aspects of the game, from increasing rewards from specific types of work to boosting stats while exploring to making missions in certain environments easier.  These important tidbits are acquired by participating in various activities the player will want to regularly undertake, such as restoring stamina at the public baths or increasing their mood by drinking at the local tavern.  These boosts quickly become necessary as absolutely everything in the game costs far too much, adding ample and frustrating padding to the game experience.  Streamlining the entire gameplay loop by knocking one or two zeros off the cost of everything from eating food to training party members to relationship building activities would have a significantly positive impact on the entire game’s flow. 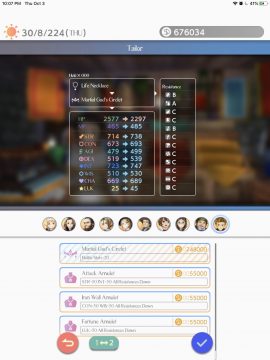 Equipment is crucial for survival out in the wilds, but is extremely costly.

Various Daylife appears to have started life as a 3DS game, with the top half of the screen strictly for display alongside a smaller bottom half, which has both touch commands and controller support.  While music and other ambiance both do a decent job, the trip onto mobile wasn’t entirely successful in terms of graphics and usability.  All Apple Arcade games are required to be controller compatible, and while Various Daylife does allow a controller, playing with one is essentially impossible as what exactly is being selected in locations like menus isn’t distinguished in any way.  Important buttons like the cancel command overlap usable commands, so accidentally choosing to eat food or select a job instead of backing out of a menu is a regular, frustrating error when using touch controls.  Furthermore, frequently used commands are not readily available — the game doesn’t sit in the background, resetting if a user temporarily sleeps the app to access anything else on their device, yet the save button is buried inside a long list of commands.

Various Daylife is the kind of game that’s hard to universally recommend playing or avoiding.  It’s structured like a game that’s intended to be played in short bursts, but the massive amount of content — a minimum of 30 hours to finish the main story, at least that much again to finish all the content the game has to provide.  Anyone playing the title in 10 to 15-minute chunks would require nearly a year to finish fully.  For the patient RPGamer, dive in — the story’s interesting and there’s a lot of great ideas to be found in Various Daylife.  It’s unfortunate these unique ideas aren’t implemented or supported in better ways.