A Divisive Entry…Now in HD

When Nintendo unveiled The Legend of Zelda: Skyward Sword HD earlier this year, I was curious about whether or not this remaster would improve on the original enough to win me over. Having played the original Wii release when it came out a decade ago, I was personally ambivalent towards it and have long considered it one of the series’ lesser entries. The promise of a new control scheme that decreased the obnoxious handholding that plagued Skyward Sword’s original Wii incarnation made me give it another chance. Upon playing the remaster, I certainly appreciate these improvements, and I rediscovered enough good elements to prevent it from being outright bad. However, there are still enough lingering issues with Skyward Sword HD that keep it from being in the same league as the series’ best installments.

Like all other entries in the Zelda series, Skyward Sword’s story revolves around incarnations of Link and Zelda trying to protect their world. In this case, Link is a young knight-in-training who has lived his whole life on Skyloft, an island floating above a sea of clouds, along with his childhood friend Zelda. On the day of the Loftwing Ceremony, Zelda ends up being swept down below the clouds by a mysterious tornado, and Link is tasked by the robot-like sword spirit Fi to follow her to the surface. It is there that Link discovers that the demon lord Ghirahim is scheming to release Demise, a powerful being who has been sealed in a sacred land on the surface world. It is up to Link and Zelda to prevent him from wreaking havoc on the world. 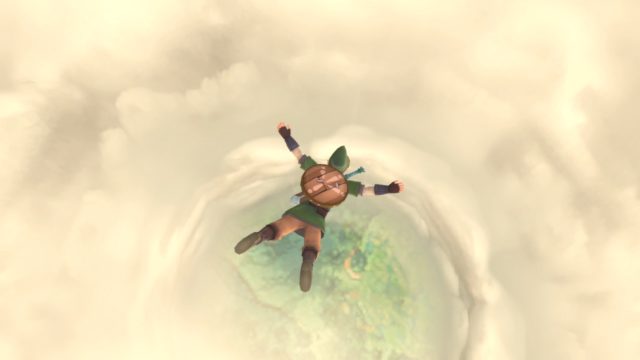 Prepare to see this sequence quite a few times.

Skyward Sword’s narrative has some intriguing elements and bits of lore. Not only does Zelda has a more active role in the story, but her relationship with Link allows for a dynamic that convincingly conveys their closeness as childhood friends. Groose, a bully character who starts out as a rival for Zelda’s affections, manages to steal the show to become a memorable fan favorite character despite relatively little screen time, growing into someone who helps Link in whatever manner possible. The way the game tackles how these characters live up to their destined roles is one of the more interesting tales in the franchise’s history. However, the way the lore is expanded upon is a mixed bag. On the positive side, Skyward Sword does a great job setting up the cycle that plagues each incarnation of Link and Zelda. Conversely, the helper companion Fi, despite having easily the most amount of on-screen interactions with Link, is about as interesting as watching paint dry. Her robot-like tendencies to measure probabilities in exact percentages and her tendency to stop in player in their tracks constantly to repeat redundant information quickly become tiresome, even if the remaster does improve over the original Wii release by making most of it optional. This makes a major reveal at the end of the game fall flat as the game fails to develop her into an interesting character worth investing in, leaving a black mark on an otherwise interesting origin story for the series mythos.

One of the biggest reasons why Skyward Sword proved divisive among fans of the series was due to the controls, which were built around the Wii Remote controller to allow players to swing Link’s sword using motion controls as oppose to the typical control scheme of past games. This divided fans on whether this was a refreshing change of pace or an unnecessary attempt to fix what wasn’t broken. Skyward Sword HD provides a new button control scheme while still having the option for motion controls using the Joy-Cons for those that prefer them. Depending on what players use, they will either use the right stick or the motion controls to swing Link’s sword and use items like bombs. While both options are viable, neither is without its drawbacks. Using the right stick to aim where a bomb is thrown or rolled towards can feel awkward initially, and there is a slight delay between pushing the stick and Link swinging his sword during combat. Although this isn’t an issue with the Joy-Con motion controls, there is still the issue of the controls sometimes needing to be recalibrated and certain attacks such as the spin attack and the finishing blow being difficult to pull off in a sticky situation. These problems aren’t deal-breakers, but players should still keep them in mind when deciding which control scheme to use. The combat itself is an interesting departure from previous games in the series as players have to pay close attention to enemy movements in order to successfully land a hit. They must also be careful when using a shield in encounters as they can be damaged if they haven’t mastered the timing to successfully block attacks. It can be annoying to be left without a shield if it breaks, especially when the player can only carry so many items.

Another aspect of Skyward Sword that has long been seen as a disappointment among fans is the reduced emphasis on exploration. The games has pushed towards lock-and-key progression as far back as A Link to the Past and the 3D entries, forcing players to beat dungeons in a predetermined order. It doesn’t help that the overworld surrounding Skyloft feels more like a hub area with some points of interest scattered here and there rather than an actual world with hidden secrets to find. Additionally, the three major surface regions that players visit multiple times over the course of the game are disconnected from one another, leading to a world that feels oddly closed off compared to other Zelda games. There is the stamina meter, which is used for sprinting and climbing. If it runs out, Link will be fatigued and slow down for a few seconds while the gauge fills back up. While it was a potentially interesting mechanic to shake things up, it’s underutilized and doesn’t really add much in execution. 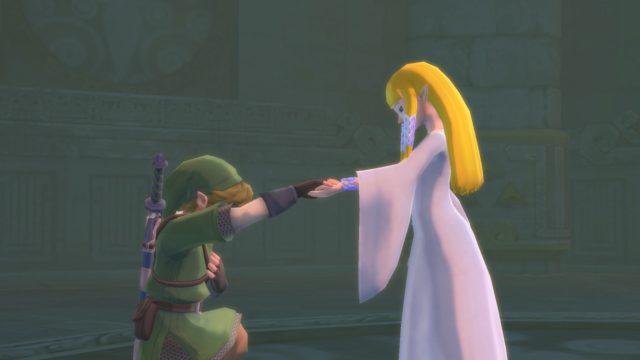 Link and Zelda’s childhood friendship dynamic was a refreshing change of pace.

Skyward Sword’s greatest weakness is the pacing. The game itself has a bit of a slow start, though it certainly isn’t the first time a 3D Zelda game takes its time to get going. Some players will understandably get impatient trying to get to the first dungeon, as even after the story’s set-up, they are required to perform certain tasks and get through Farron Woods, the game’s first major region. This isn’t necessarily a bad thing since it does allow players to take in regions of the surface world even if it is hampered by the decreased emphasis on exploration and more linear level design. However, later sections of the game end up having blatant moments of padding, such as having to escort and protect a particularly obnoxious robot while climbing up the volcanic region or a particular questline near the end of the game that stops the pacing dead in its tracks and exists to artificially extend the game’s length. Most infamously, the Silent Realm trials have been a contentious element ever since the original Wii release due to the tedious busywork nature of having to collect a number of trinkets while avoiding hits from enemies that will force players to start all over again.

The game’s actual dungeons do fare better, playing with some interesting ideas, such as using timeshift stones to bring the area surrounding them into the past, which is a common solution to some of the game’s copious puzzles. While the dungeon designs generally don’t deviate from what is expected from the series, there is still enough ingenuity to generally make them enjoyable to play through. Dungeons are entertaining due mostly to a mixture of standard Zelda items like the bow and bombs along with the at-the-time new additions such as the Beetle and the whip that allowed for some variation on typical series formula. The Ancient Cistern is a stand-out dungeon as it cleverly plays around with verticality. Said dungeon also ends with the strongest boss in the entire game, as it is challenging while also departing from the typical “hit its weak point, go to town on it, then rinse and repeat three times” Zelda boss. In general, the more interesting dungeons are in the latter half of the game, with an invisible pirate ship and another that requires players to rearrange rooms taken from the previous dungeons in order to progress. 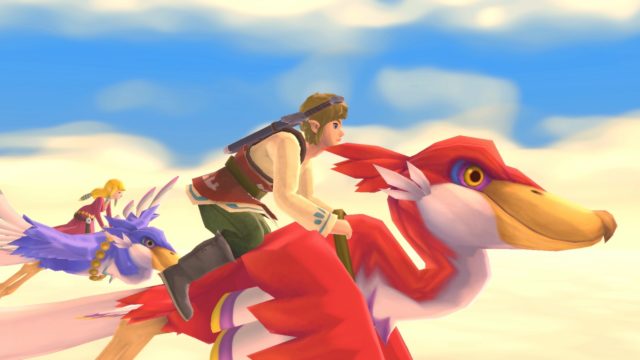 It’s no Wind Waker, but the visual style still holds up well.

Skyward Sword HD does about as good of a job as one could hope in updating the visuals from the original release. The watercolor-inspired art design is still easy on the eyes, even if it doesn’t quite reach the level of the remarkably well-aged cel-shading in Wind Waker, and some of the texturing and character models still show a game made for the underpowered Wii console. Skyward Sword HD runs without a hitch in both docked and handheld mode, giving players a smooth experience regardless of how they play. The game’s outstanding soundtrack, which was the first in the series to be fully orchestrated, conveys both the sweeping nature of Skyloft and the more foreboding mood of the surface world and its dungeons.

Skyward Sword HD should be commended for its attempt to improve on the original. Having a new control scheme and making a good deal of Fi’s advice optional make it a more palatable experience. However, the game still suffers from pacing issues that made the original feel too bloated as well as a disappointing deemphasis on exploration. This remaster could have realistically improved upon a lot, yet it would still fall short compared to the series’ strongest entries. There is still enough for those looking for a more traditional 3D Zelda experience on the Switch provided they keep their expectations in check.