All Errors Aren’t Made the Same

Some of the biggest cult classics in any form of media tend to be spoofs. Spoofs aim to poke fun at stereotypes of a certain genre or medium and, having been around since the beginnings of the gaming industry, RPGs have built a long list of stereotypes that can easily be parodied. Developer BitNine Studio and publisher WhisperGames attempts just that with tERRORbane, where finding bugs and ruining the developers game is the core mechanic. It’s commentary on the industry can be thoughtful, but this spoof doesn’t feel clever enough to make it enjoyable.

Through a series of comedy bits, tERRORbane attempts to serve as commentary on the gaming industry, especially RPGs. The beginning starts out as a cliché RPG plot with a hero that goes by the name Terrorbane, but then turns into a wacky story whose main characters are essentially the player and the developer. The “developer” is actually the only voiced character in the game and is crucial to how the player experiences the story. With that, tERRORbane ends up serving as a way to express frustration with the gaming industry and neglects narrative advancement, though this works to the game’s advantage.

tERRORbane appears to be largely born out of of the oversaturation and repetition of the genre. It does that by poking fun at long-running franchises with convoluted plots and re-releases that with little to no content changes, as well as nonsensical titles. The developer character also explains frustrations with players constantly trying to break a game that they worked hard to make. The interactions with the developer contains the most entertaining parts of the game. However, the constant gags work their way into more aspects of the game, where they don’t work nearly as well. 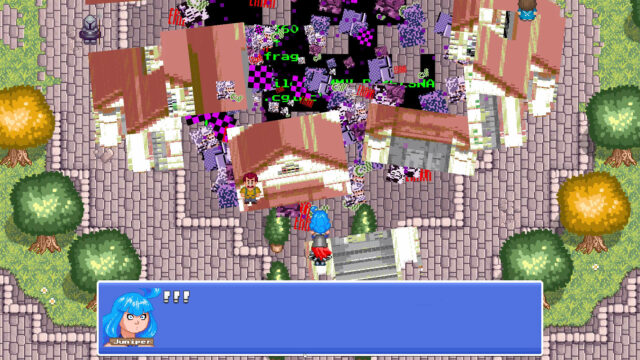 The town of Whiskerberg being whisked away by a bug.

The battle system doesn’t involve much combat strategy. Enemies attack by messing with the game’s code and the player needs to solve a short puzzle to fix it. Once the errors are fixed, the player attacks and defeats the enemy. There are differences in the way battles are set up. Battles are mostly turn-based, but some involve action or even a card game. No matter which way a battle is set up, however, it will always involve the player exploiting errors in the game to complete it. The problem with this is there isn’t any satisfaction with “breaking” the game. Instead, it simply amounts to a collection of small puzzles that are not particularly fun. It’s a gimmick that even in it’s short run time can wear out quickly. Multiple playthroughs are encouraged, but even with different endings there wasn’t much variance to how the game played.

That’s a constant problem with tERRORbane. The best spoofs require incredibly sharp and clever writing. While parts of the game are able to achieve that, there are too many missteps along the way that make the experience very dull. A good example of this came during a battle where player choices determined the type of boss battle to take place. It led to a simple card game would eventually become nonsensical, which it aimed to poke fun at. It did that by constantly interrupting the game to give instructions on how to play it. While the reference is apparent, it’s still essentially gives players a nonsensical card game that isn’t fun to participate in. 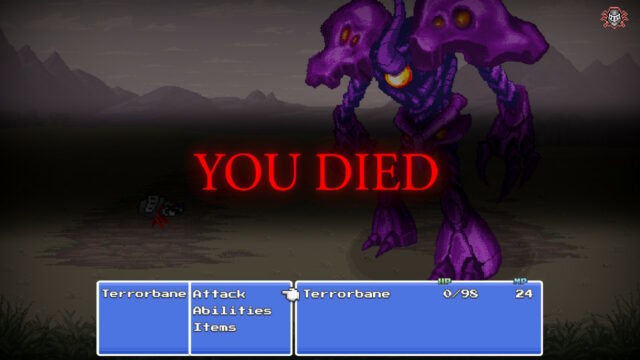 Visually the game is very reminiscent of Game Boy Advance RPGs. It doesn’t pull off anything visually impressive, but it does evoke nostalgia for that style of game. The soundtrack felt forgettable though. Again, the focus of tERRORbane is finding bugs, but things like the visuals and soundtrack should not be neglected because of it. Outside of that nostalgia hit, the visuals are fine, while the soundtrack does not stand out at all. The game focuses on its parodic primary purpose and if that doesn’t connect then there isn’t much else there for players to sink their teeth into.

Spoofs require sharp writing and cleverness to pull off and tERRORbane just doesn’t have enough of it. There are small moments in the game that are great, but the bad ones come often enough that the game falls flat. While finding bugs feels like solving puzzles, it lacks the satisfaction of feeling like it’s actually breaking the game. Its approach is unique, but not executed well enough. There’s just not enough in the overall package to make tERRORbane an enjoyable experience, especially for those looking for something more than flat parody.