Genre combinations are becoming more prevalent in gaming with varying results.  BKOM Studios’ Sunday Gold takes the point-and-click adventure genre and blends it with RPG elements including skill trees, levelling, and a turn-based combat system.  The results of this union are mixed as each genre’s elements end up as average representations, but the combination is still a unique undertaking that has its moments.

Sunday Gold takes place in 2070s London and follows the story of Frank Barber, a crook who prefers to steal from the rich to benefit the poor.  Down on his luck after some heists gone wrong, Frank meets with his trusted accomplice Sally at a pub about a new opportunity from Gavin, an IT manager recently fired from the local billionaire Kenny Hogan’s corporate offices.  Kenny Hogan gained fortune and fame by rejuvenating a lethargic Britain with the cybernetically enhanced undead dog fighting ring King’s League, which keeps gaining in popularity despite protests.  Gavin recruits Frank and Sally to break into the offices to gain proof of the company’s dark secrets to be sold to the highest bidder, however things aren’t as they seem for the intrepid trio as they find themselves in a conspiracy with inhumane implications.  This conspiracy takes center stage, and leads to many potentially interesting world and character building moments feeling like an afterthought.  While its uncovering is still entertaining and provides some twists and turns, it comes across as more of a side story in a larger setting that is never explored.

Chapters in Sunday Gold contain a large complex with interconnected rooms that are filled with interactive objects.  Players are free to explore each room they have unlocked as well as glance at any objects of interest.  Most puzzles can be solved through trial-and-error, but it’s much more rewarding and simpler to come to the solution via clues obtained through memorization and a keen eye.  However, keeping track of all the moving pieces as players bounce between rooms can be overwhelming with players juggling many parts to different puzzles, and it isn’t unusual for something to be picked up early on that has no use until near the end of a story sequence. 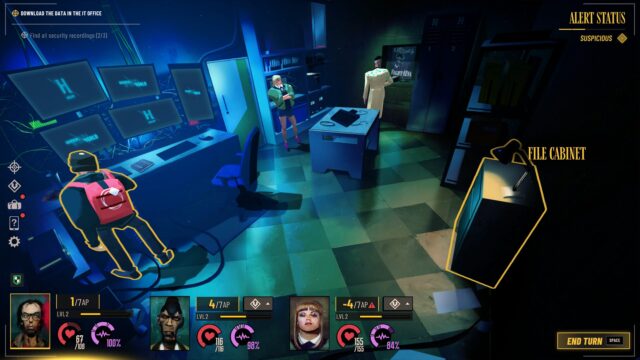 A typical IT room full of interactive objects.

While moving around is free, deeper examinations of objects cost action points (AP).  Searching an easily accessible object costs three AP, while others require special tasks like picking locks, moving heavy objects, or hacking into computers that can add an additional one to three AP before they become accessible.  Each of the three characters can use up to seven AP per turn.  At the end of each turn, there is a chance for the threat level to increase, decrease, or to be spotted by enemies and attacked.  As the threat rises, the group attracts more frequent battles against stronger enemies, encouraging players to solve puzzles quickly.

Each of the heroes has a unique specialty skill; Frank picks locks, Sally moves large objects, and Gavin hacks into electronics.  Each skill use has an associated mini-game, with players getting a few chances to succeed before the attempt is deemed a failure.  Frank’s lockpicking involves placing a rotating cursor within a moving radar five times.  Sally’s mini-game simulates breathing by having players move a fluctuating bar within a highlighted range and keeping it there while an unseen timer ticks down. Gavin’s requires finding a four digit code from a set of three to five numbers, which is a fun diversion that uses memory compared to the other timing-based mini-games.  Frank and Sally’s mini games always have to be completed by the player and take a little bit of time to get used to, but at least with Gavin’s numerical puzzle he can gain an ability to automatically crack the code that costs max AP. 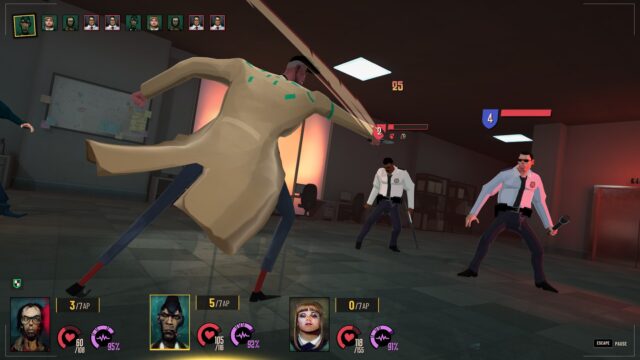 One of the many camera angles in combat as Frank makes use of his butterfly knife.

Exploration, puzzles, and quests reward players with more experience than combat does alone, which makes fights feel less rewarding and appealing.  Levelling up grants characters get a small increase in stats and two skill points, which can be used to boost an unlocked combat ability, passive skill or efficiency at the mini games up to three additional times.  Fully maxing out a skill tree is not possible with the maximum level of ten, but players are given the opportunity between to reset and reallocate skills as needed.

Combat in Sunday Gold also uses AP so players need to consider keeping some available for exploration once combat ends.  Regular attacks use one AP, while special abilities cost more, and may require time to activate.  Item use is free but ends the turn, while guarding replenishes AP and negates any charged attacks.  Enemies have shields that provide them with a minor increase to defense and evasion, which can be reduced more quickly by hitting their weaknesses and lead to a staggered state when removed fully, during which attacks always hit and deal extra damage.  The balance between maintaining AP and how to attack efficiently is fun, but often feels repetitive due to a lack of enemy variety.

Characters have a composure meter/score players will need to keep in mind, which can be lowered by encountering certain things during exploration or taking attack form certain enemies in combat.  Once a character’s composure drops low enough, they enter a panicked state that can gradually worsen.  This state adds with a countdown that ticks down during a turn, with visual effects occasionally distracting players at higher levels of panic.  If an action isn’t decided on by the end of the countdown, the character will either perform a random action or just waste a turn.  Players are able to regain composure with consumables, an ability Frank learns, or by gaining confidence with the completion of certain exploration tasks.  The way it works to heighten the anxiety of the player is one of the most creative elements of the game, and it’s disappointing such ingenuity isn’t found elsewhere in an otherwise average combat system. 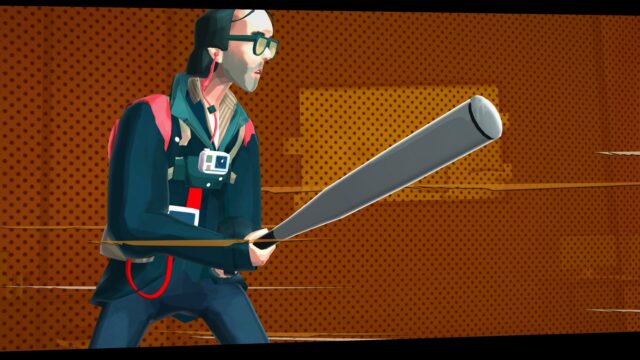 Fun and stylized backgrounds as characters wind up for special attacks.

Sunday Gold features a fun comic book styling for its story scenes and special attack animations that really pop in the moment.  Camera angles in combat are very stylish, but can be a practical hindrance as some angles don’t show damage totals or even the enemy.  The point and click interaction with some of the objects can be very particular, with some only only being the size of a mouse cursor.  This can cause moments of blind confusion as players search for the solution to the next puzzle only to find it hidden in plain sight all along.  The game’s audio work is passable, with sound effects and backing music sitting in the background without being noteworthy.  Voice acting hits really well at moments, with each protagonist and some minor NPCs running the gamut of emotional ranges, despite everyone swearing like sailors.  Unfortunately, some of the antagonists monologue like poor cartoon caricatures and don’t emote enough to successfully chew the scenery, making them feel lacklustre in comparison.

Sunday Gold has a story that is set in an interesting world, but its focus on a singular plot point, while entertaining, makes other content feel disjointed.  As a point-and-click adventure the game lacks stakes as everything can be completed with enough attempts.  As a turn-based RPG the characters don’t get a lot of customization, and the most interesting parts of combat are how to avoid spending too much time in it, or dealing with an inventive negative state.  However, the balance between both of these average experiences combine into an enjoyable experience that fills its fifteen to twenty hour runtime, but likely only for those actively looking to see the results of such an experiment.