Can’t You Hear Me Yell-a?

At a casual glance, Stella Glow resembles the Luminous Arc series. Spending more time with the game does nothing to dispel what the casual glance revealed, but it also demonstrates that some of the problems of the earlier witch-oriented tactical series have been smoothed out. Stella Glow manages to feel like the best entry in the Luminous Arc series, though that admittedly isn’t a great feat. It’s not a great game, but it succeeds in most of what it tries to do and delivers a solid tactical experience.

Alto is a teenager living in an unremarkable village of the Regnant Kingdom with his adoptive family. One otherwise-fine day finds a Witch named Hilda arriving in this village, singing a song of ruin that crystallizes all but Alto and his adoptive sister Lisette. These two are given new powers suddenly, transforming Lisette into the Water Witch and Alto into a Conductor able to draw out her full power. This development precedes the arrival of troops from the capital who take the pair away, as Hilda’s crystallization program has struck many locales and must be opposed. Tracking down the other Witches becomes necessary in order to undo this crystallization, but Hilda and her Harbinger followers are not easily daunted.

A key part of Stella Glow‘s setting is the supposed inability of anyone except Witches to sing, yet this aspect receives much less attention than such a concept might seem to warrant. There are other issues with the writing too, such as the failure to hear Hilda’s full plan until very late in the proceedings, along with a surprisingly popular Witch in a world where these magical songstresses are supposedly objects of mass hatred. The characters are an endearing bunch though, and the game’s true climax is rather interesting. Atlus has given the game a top-notch localization to make sure that nothing is too baffling, and enough is done right to make this a worthwhile narrative on balance. 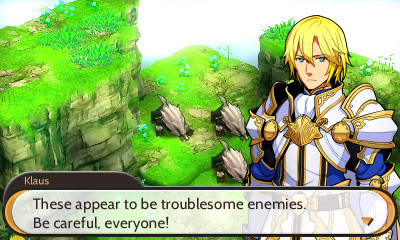 There we go again, making wolves out to be bad when they’re just out to bite people.

Combat adheres to the broad rules of tactical titles through the decades, with nothing to violently rock the boat. The player’s group squares off with enemies, each moving according to a visible turn meter, and the proceedings will be instantly comprehensible to any tactical veteran. Stella Glow does a good job of making each player character distinct though, with unique abilities and applications. It also does a good job with providing varied missions, altering goals and terrain to keep things from getting monotonous. Even its non-story missions that exist solely for grinding manage to provide a few unique enemies to fight, though these are still palette swaps of something previously seen.

Most of the combat will not be difficult to tactical veterans either, though optional goals are included in story battles that demand a bit more strategizing to fulfill. Several complex fights later on with multiple enemy arrivals can pose a challenge, with the somewhat mitigating factor of being able to restart the same encounter after getting a game over. One issue that is not directly related to the challenge stems from deliberate battle pacing, as the cursor flits between each participant even when no action is being taken. In battles with few characters directly under player control, this means it can be a significant amount of time before input is again required.

Characters improve in several ways during Stella Glow. One is the standard method of leveling up to gain new skills, which is employed effectively but unremarkably. A second is via fitting orbs to weapons, which have myriad effects such as inducing status ailments or granting an elemental affinity — the orbs even migrate to newly purchased weapons automatically when they are equipped. The third improvement is granted during Alto’s free time, when he can converse with party members of his choosing. Enough conversations unlock further combat abilities, and allow the player to focus on whichever party members are most captivating.

Conversations alone aren’t enough to improve the Witches sometimes, and helping their aptitude requires delving into some unusual vocabulary employed by Stella Glow. Alto is able to Tune each Witch, both as part of the story and when necessary to resolve personal issues that hold the ladies back from developing further relationships. Tuning involves a thirty second mandatory animation playing out before a unique battle takes place in the heart of each Witch. Story Tuning allows Alto to Conduct that lady later on, using an odd animation of shoving a dagger into her throat that is reminiscent of Shining Wind. The songs produced by Conducting affect everything on the field and are extremely useful, just with some atypical language and imagery as accompaniment. 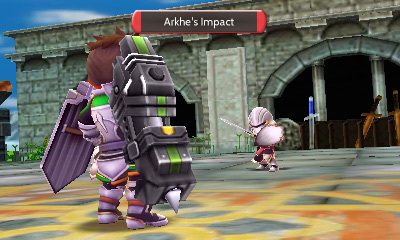 Why does Archibald have a low move range? This contraption is probably the reason.

A game with music as a key part of its setting ought to have a fitting soundtrack, and Stella Glow at least attempts to do so. It is at first incongruous to hear contemporary pop tunes emanating from the vocal chords of these Witches, but they fit the personality of the vocalists fairly well. Otherwise the music is a varied collection of tracks that gets more interesting as the game continues, with a number of very compelling tunes appearing in the later stretches. Stella Glow deserves credit for a large amount of voiced content, with well over half the lines being acted. A few of the battle quotes and shopkeeper exhortations get tiresome due to their constant appearances, but the large cast does fine work throughout.

Stella Glow‘s visuals aren’t a knockout, but they generally aren’t trying to be. Combat looks similar to many other tactical games from over the years, and the character models used for move animations are appealing. The most unfortunate part of the visuals is that drawn stills and several character expressions are used to convey all story sequences, and numerous instances of something important on the screen are not accompanied by a unique piece of artwork to help depict them, just dialogue.

While not a revelatory experience that changed my life, the time spent with Stella Glow was fun most of the time. My experience with the pair of Luminous Arc titles brought across the Pacific, especially the second, did not incline me toward eagerness at spending more time with Witches marauding around the world. Fortunately Imageepoch made a few changes to that core notion, and I emerged satisfied from this particular Witch infestation. 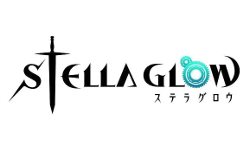