BioWare’s Star Wars: Knights of the Old Republic carved out a fond place in many RPGamer’s hearts when it first released in 2003. Although now no longer considered part of the official canon, its influence remains strong, with publisher and developer Aspyr bringing it back into prominence with the announcement of a full remake alongside this new Nintendo Switch port of the original game. While certain elements absolutely show their age, an excellent port ensures that its approach to quest design and the thoroughly engaging narrative remain as shining examples in the genre.

Knights of the Old Republic takes place 4,000 years before the rise of the Galactic Empire. This gives it the opportunity to fully focus on its own tale, though there is some expectation that players are familiar with the universe. It puts players in the thick of a war between the Republic and a massive invading Sith force. This war has come in the aftermath of another galaxy-spanning conflict, which ended after two rogue Jedi knights, Revan and Malak, went against the wishes of the Jedi Council for them to not interfere and led the Republic forces to victory. After subsequently departing into unknown regions of space, however, the two Jedi fell to the Dark Side and returned at the head of the Sith forces. Though Revan has since fallen thanks to a secretive Republic mission, Malak has adeptly taken up the reins and the Republic is in dire straights.

Players control a customisable human crew member of the Endar Spire, a ship carrying one of the Republic’s last hopes, the Jedi knight Bastila Shan. Bastila’s battle meditation ability lets her turn the tide of combat, even in battles of a massive scale. However, the Sith have discovered her whereabouts and launched an attack on the ship. Players end up escaping with Republic soldier Carth Onasi, their pod crashing onto the planet Taris, where the duo search for Bastila, who escaped before them. 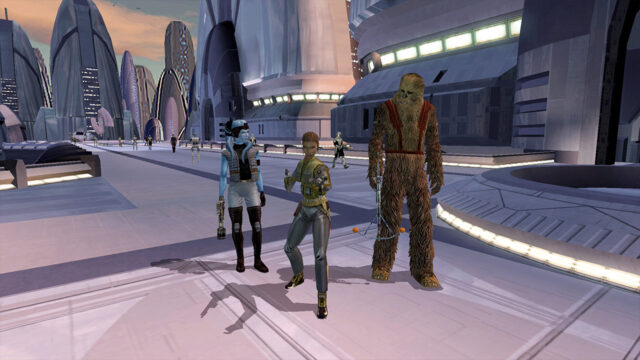 Combat is the primary area where Knights of the Old Republic feels like a product of its time. Following on the heels of BioWare’s previous titles Baldur’s Gate and Neverwinter Nights, Knights of the Old Republic uses a modified version of the Dungeons & Dragons 3rd edition ruleset, once again transposing it into a hybrid real-time and turn-based combat system. The D&D influences are felt immediately with the character creation, giving players points to spend in familiar attributes such as strength, dexterity, and charisma, as well as in the level-up options where players can upgrade attributes or select new abilities and powers. Classes and build options are sensibly narrowed down, however, with characters given the option to focus on melee and ranged combat, while Jedi get access to Force-related powers. There’s a good variety of abilities on offer and players will have to appropriately focus their builds to be most effective.

The hybrid turn-based and real-time combat means that participants do a registered action every few seconds: a regular attack, an ability, or use of an offensive or defensive item such as a grenade or healing pack. The reliance on the D&D dice-based calculations results in lots of miss notifications that conflict with how the combat is positioned and shown, which becomes grating at times. Players control one of three active party members, while the remainder act in accordance with their limited AI options, but control can be immediately switched during combat and the game can be paused to give specific commands with simple button presses. There are three difficulty settings that can be switched between at any time. The balance is largely fine, but certain abilities feel overpowered and there’s always a sense of luck being a crucial part when multiple misses are followed by one or two hits that take off significant chunks of health. It’s a system where those already knowledgeable of it and its foibles will be able to get much more out of it than those coming in fresh.

Knights of the Old Republic contains many of the narrative elements that have become almost synonymous with BioWare. Particularly noteworthy are its character arcs, and the game further highlights why they have become such a popular part of the studio’s titles. The game makes heavy use of Light Side versus Dark Side choices, and provides a wide variety of methods for completing quests. It’s not immune to the trappings of such choices, however, as they quickly jump to the extremes of being nice and helpful against being an murderous jerk. While it successfully points out the flaws of the Jedi and has one of the better examples of a character in that grey area, Knights of the Old Republic mostly encourages players to just go fully one way or the other without there being much appeal in trying to toe the line. Despite this, there’s always a lot of fun to be had exploring the options available, and it’s always satisfying to be able to set up an ideal completion for a quest, find a way to play different NPCs off each other, or find workarounds to particular challenges. 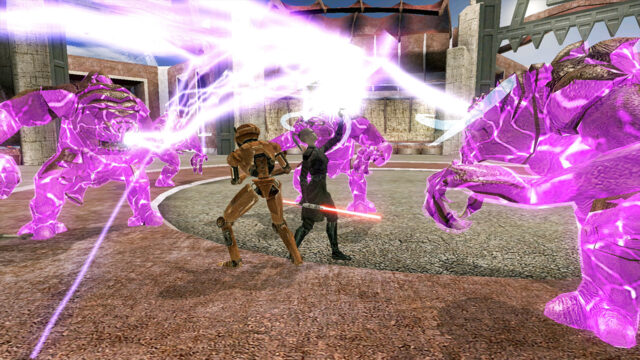 The narrative is absolutely Knights of the Old Republic’s biggest attraction. While the overall story is strong on its own, it’s supported superbly by the individual stories of the major characters and planets. Thanks to their mysterious connection to Bastila, the player character finds themselves deeply connected to events, with some particularly noteworthy twists and turns. While the impact of certain major reveals are diluted playing through the game a second time, it’s still lots of fun to go back and see the hints and little touches that the game excellently paces out.

Knights of the Old Republic is helped in its narrative endeavours by a memorable and varied cast, each with their own stories and motivations. It uses the opportunity to explore themes of solitude, revenge, sorrow, and much more across the diverse set of characters and builds up the camaraderie between them to great effect. Characters will frequently react to the player’s decisions or NPC comments, and help add a superb amount of flavour and rich history to the setting. The writing is great throughout and peppered with dry humour, Jolee and HK-47 being the masters.

While its quest system is great and there are a number of ways players can work through each planet, there are a few quests that can become impossible to complete; for example, the story with Mission’s brother comes to a sudden halt simply by forcing open a door too early. In addition, when traveling between planets, the player’s ship may be accosted by Sith fighters, resulting in a shooting mini-game that offers no reward whatsoever and is the game’s one true annoyance. Players who like keeping track of their playtime should also note that the game clock will continue even when the Switch is placed on standby. Nonetheless, the minor annoyances are readily made up for with the quality of the storytelling. 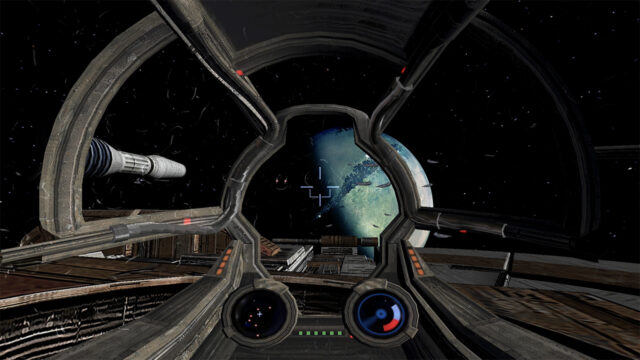 Having to shoot down fighters is annoying but at least brief.

The visuals work hand in hand with the writing to successfully make players feel like they are in the Star Wars universe. Locations, including favourites Tatooine and Kashyyyk, are well realised and the designs all feel like they belong. Some areas can feel a bit empty by modern standards, but the views are still appealling. In addition, the performance of the Nintendo Switch port is excellent. Though there are loading screens, they are gone just as quickly as they come up, while the frame rate is consistently high and the controls are fully responsive. The work on upping the resolutions of the textures pays off and the game feels right at home in both handheld and docked modes.

The voice acting performances are mixed; while most of the major characters are strong, others are stilted. Most non-human characters speak in their own (subtitled) languages, but it becomes obvious that only a limited number of generic lines were recorded for these as audio repeats on different phrases, while each English line is fully voiced. The game uses the appropriate sound effects for blaster fire and lightsabers, which helps transport players into the universe, although the sound balance is a bit odd and combat effects have the habit of drowning out everything even after adjusting the levels. The game sets the scene with John Williams’s iconic main theme during the opening, with the rest of music giving it a decent backing while being otherwise unmemorable.

It’s pleasing to see how strongly Star Wars: Knights of the Old Republic has held up and how well it fits on the Nintendo Switch, making one wonder just how many other classic RPGs will see new life on it. For those who haven’t played it before, the Switch port is an ideal time to find out why BioWare’s 2000s output is so highly regarded. For those who have, it’s a great opportunity to recover those fond memories on an incredibly convenient platform.