Visions of Flight and Falling

Remakes and re-releases are no strangers to the Nintendo Switch and PC, with PlayStation Vita titles seeing new life on both platforms. Developer Experience and publisher NIS America serve up a duology with the release of Saviors of Sapphire Wings and Stranger of Sword City Revisited. With this release, the two companies demonstrate an accessible dungeon-crawling experience for beginners and veterans alike. This review focuses on Saviors of Sapphire Wings, a renamed port of the previous Japanese-only PlayStation Vita title. RPGamers curious about Stranger of Sword City Revisited can check out Mike Moehnke’s previous review of the original Stranger of Sword City.

Sapphire Wings initially sees players controlling a group of heroes known as the Knights of the Round, who have infiltrated the lair of the Overlord of Darkness, Ol=Ohma. Slain by the Overlord and reincarnated decades later in a changed world, players are tasked with recruiting a number of characters deemed worthy as possible members of the Knights of the Round, and charged with continuing their predecessors’ mission to defeat Ol=Ohma once and for all.

Described as a “narrative dungeon-crawler RPG”, the emphasis on the world-building is clear from the onset. While the main character can be customized, other party members who join the Knights have established personalities; while some can veer into questionably inappropriate fan-service material, most are portrayed as individuals with complicated histories and internal motivations which are revealed throughout the story. Though the bulk of the story is relegated to high-fantasy tropes, the degree of emotional investment in the characters elevates an otherwise trite tale, and thoughtful characterization heightens the intensity of the plot. 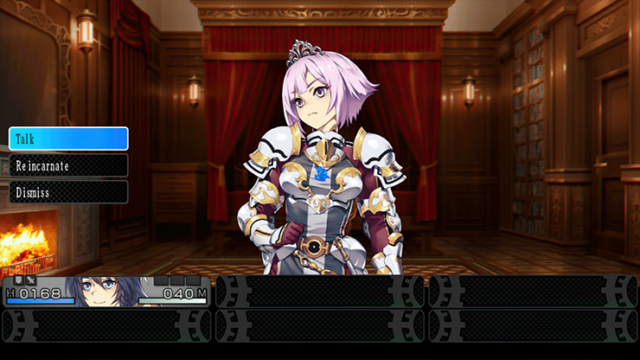 Players can have private conversations with party members, leading to multiple benefits.

Party management is a crucial part of Sapphire Wings, filling the bulk of the time when not exploring dungeons. In general, gameplay falls into a routine of exploring, returning from plumbing the depths of a dungeon, and cycling through a handful of screens to do shopping, party management, item forging, alchemy, and other miscellany. Mastering all of the various facets is not required to advance, allowing players to decide how much time to invest into multiple layers of menus. Newcomers to dungeon crawlers are able to acclimate to the demands of party management without feeling overwhelmed by the sheer number of game mechanics to learn.

Early in the game, the player is given a headquarters, allowing for private conversations with each character in the protagonist’s chambers. The conversation system is something akin to a hybrid between the social systems featured in recent Fire Emblem games and social links from the Persona series. Party members can be summoned to chat or eat, during which the player will be given opportunities to select responses to an ongoing conversation. Favorable responses will increase the relationship’s soul rank, leading to tangible benefits, including stat boosts. These mechanics enhance the narrative while also giving the player an advantage during upcoming battles.

Exploration is done in first person, and combat allows for up to six party members, with a front and back row for both allies and enemies. Characters in the back row must rely on ranged or magical attacks to reach the enemy. Battles are similarly entirely in first person, with static images of each character appearing when it is their turn. Enemies are also represented by pictures, and move only when shifting rows or escaping battle. The entire affair is eerily still, as even the attack animations are minimal. There are shortcuts to allow players to repeat the last round’s actions, as well as to speed through the sparse animations. While the battles themselves are visually unexciting, they move along quickly enough to avoid fatigue. This is a boon to players who will undoubtedly find themselves grinding through seemingly endless battles to complete quests. While difficulty spikes are expected, there are a few instances where they threaten to derail the balance completely, necessitating considerable effort to level up before moving forward. 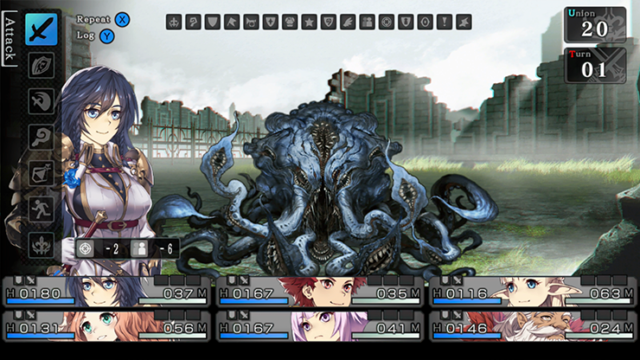 The difference in tone between party member and enemy character designs is jarring.

Much of the game is designed with an anime aesthetic, most noticeably in the character designs and menu background screens. The individual dungeons and landscapes are varied and include a vast range of colors, from lush green forests to a city draped in bright fog. This consistency in tone is harshly interrupted by the enemy designs, which seem to have sprung fully formed from the nightmares of H. P. Lovecraft. The stark contrasts in visual styles make the inspired and grotesque enemy designs difficult to truly appreciate in this context.

The sound design can be best described as consistent, but unrefined; many tracks feel like repurposed music from a library of generic tracks. The battle themes in particular sound vaguely recognizable, as if from a classic RPG that should’ve stayed in the past. While individual tracks may escape a player’s memory after a few minutes, one highlight of the sound design is the dungeon effects. These sounds, ranging from insects buzzing in a tree to the wind whirling through the mountains, breathe life into the various environments beset by otherwise average music.

Saviors of Sapphire Wings is an accessible foray into dungeon-crawling that emphasizes gameplay over stat or party management while mostly avoiding the usual pitfalls of difficulty spikes. The overall presentation is somewhat marred by inconsistencies in graphical style and uneven sound design. However, well-developed characters elevate an otherwise ordinary high-fantasy narrative about a group of heroes who are the world’s second chance at salvation…even if these Wings never truly get off the ground.