I Found My Shirt at a Bus Stop

Have you ever gotten a mysterious text message stating that your boyfriend has been kidnapped? Did you ever go out of your way to beat up an entire city just to get your honey-poo back? If your names are Kyoko and Misako, then you are the River City Girls, and you are hopeless in love with your boyfriends and will stop at nothing to rescue them! Wayforward presents a classic beat-’em-up that is both humorous and heartfelt as it is challenging, even for veterans of the genre.

Players take on the role of Kyoko and Misako, two teenage girls who are dating the infamous Kunio and Riki of the River City Ransom fame. Upon receiving some very cryptic text messages, the girls parse out that their boyfriends have been kidnapped, but by whom is a mystery. The girls bust out of detention and begin their quest to defeat anyone and everyone who stands in their way, following numerous rumours across River City to find out what happened to Kunio and Riki.

Beat-’em-ups are not generally known for their stories or writing, but River City Girls shines in this area. Kyoko and Misako’s dialogue is sharp and witty, and many of the brutes and bosses they encounter offer clever quips throughout, making it hilarious to brawl through River City. There are so many laugh-out-loud moments, and many of the references to other popular fighting titles such as Street Fighter and Double Dragon shine through. 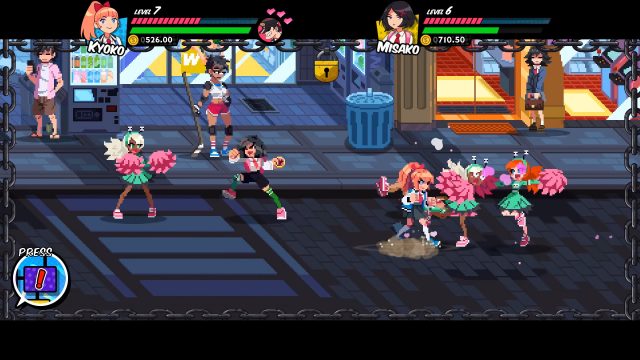 Girls gonna knock you out!

Although River City Girls’s combat pays homage to classic beat-’em-ups, it has much more in common in terms of structure form to Ubisoft’s Scott Pilgrim vs. the World, which released back in 2010. While there is a classic leveling system à la River City Ransom, a lot of the stylized aspects in terms of graphics and gameplay feel very modern and robust, which is much closer to Scott Pilgrim. Kyoko and Misako can spend their hard earned cash on new moves or additional stats to take down baddies in River City, and many of these combat styles are references to classic Street Fighter characters and their signature moves.

There’s a lot of choice and versatility in move sets for each of the girls, and the flow of combat is fairly straightforward. Kyoko and Misako each are equipped with light moves, heavy moves, and additional move sets that can be purchased. Kyoko is recommended for players who prefer speed, while Misako is more of a heavy hitter. Both girls can also equip items that can boost their stats, or provide unique bonuses such as more cash rewards upon defeating enemies or additional damage dealt towards a specific gender. As the girls level up, they also gain more health and stats, with both permanent and optional boosts available via items like food.

As a modern beat-’em-up, the game definitely has some difficulties throughout. Boss fights in particular will challenge a player’s patience and perception, especially with two that are cheap and frustrating. While many of the boss battles feel fair, the game does suffer from two that are cheap and frustrating. Like most beat-’em-ups, River City Girls also suffers from some interaction issues in the form of buttons not responding in some instances, and awkward platforming elements that don’t feel like they belong to begin with. These issues add unnecessary frustration, and insult to injury when, knowing button inputs were correct, a character gets pummeled to the ground. Playing this game solo is deadly, and while having two players does make it easier, often there is still too much happening on the screen, and it’s easy to feel overwhelmed in certain areas of the game, especially when the controls choose to be unresponsive. In the end, the difficulty in River City Girls will be a turn off for some. 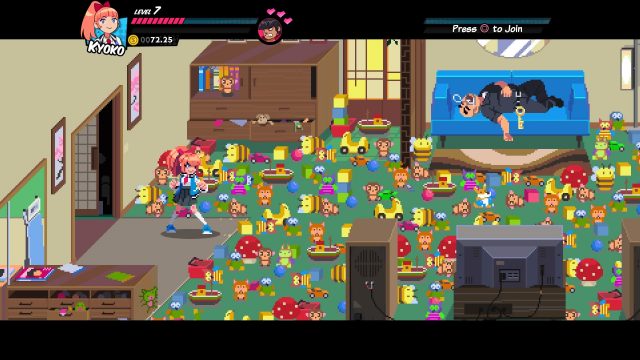 This room was my personal hell.

While interaction in the game is hit-or-miss, the soundtrack River City Girls sports is phenomenal. There is vocal tracks which represent one of the characters in the game and her career, while the instrumental tracks get players completely pumped up to take on foes in River City. There’s a great mixture of synth-pop and rock, and all of it is catchy. In fact, there isn’t a single bad song on the soundtrack.

Visually the game is stunning, sporting well-defined pixelated graphics. There’s a lot of vibrant colours in use, and every area, encounter, and boss fight has their own unique graphical details that provide such originality to the overall appearance of the game. One area that really stands out is the cruise ship level, wherein Kyoko and Misako meet their vocal idol, and the boss fight includes instances of Guitar Hero frets embedded into the level design.

Finishing River City Girls takes rough ten hours to complete, though having a good friend for couch co-op can make this time feel shortened. There is a fantastic bonus to completing the game that will have River City fans delighted, and the post-game options offers better rewards, with anything that was unlocked in the vanilla version is still accessible.

River City Girls brought me so much joy, and playing it with my roommate we beat it in two days without taking too many breaks. It’s fantastic to have a couch co-op game that takes all of the classic elements of beat-’em-ups and gives them an upgrade that feels modern and fresh. I can’t remember the last time I played a beat-’em-up that had both a fun and entertaining story, but was also great to play, even with its few frustrations.