There is something to be said about genre crossovers. The result usually ends up being something horrific that never should have been created, or something hugely entertaining and special. Atari has created something unique with it’s Pong-themed RPG, Pong Quest, offering players a combination unlike anything ever made. While it is a lot of fun to play, there are enough pitfalls that prevent it from being a shining example of a crossover title.

Taking on the role of a young, naïve paddle, players embark on a randomized dungeon-crawl. The King of Pong has lost all his magic orbs which help him create shenanigans and our hero has been tasked with retrieving them. The plot is an afterthought, but the dialogue in the game more than makes up for the ridiculousness that is a Pong-themed RPG. Chock full of cute and delightful dialogue and awkward Pong related puns, this is the kind of game that easily puts a smile on one’s face. The game has such an adorable and unique presentation that is extremely easy to get sucked into, and it’s super fun to customize the hero in silly outsides that are built purely on the game’s visual aesthetics. 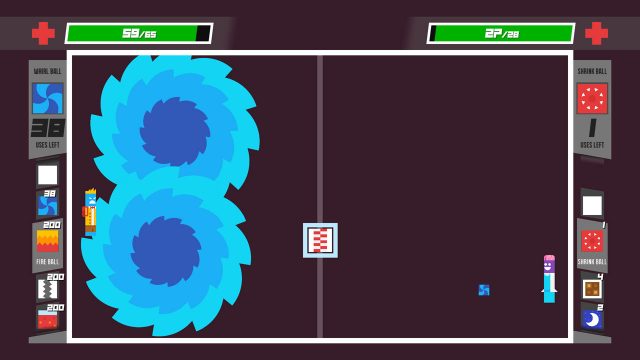 At the heart of this paddle-based RPG, however, is some of the most boring dungeon design out there, and sadly it makes up the bulk of the game. The randomized dungeons often offer the same few core layouts, with a mere change in the coat of paint. Most of the time the hero is plodding along, floor-by-floor in search of a key to open the boss door. Sometimes there is a random minigame that is completely optional, and usually never fun. It is hard to make Pong minigames not feel like more Pong and given how much Pong the player will be enjoying, it is just too much.

The player’s enjoyment of combat is going to hinge on established skills with the classic table tennis game. When the hero incites a random encounter, they will go into a one-on-one table tennis match that has a few curve balls thrown in. While meandering through the dungeon, the hero will pick up a variety of different balls, each with unique abilities. Skills include status aliments, ball-themed buffs, and other oddities such as tossing the game Centipede in the middle of combat.  Many of the balls offer a ton of variety, though not without flaws, and some are downright cheap. The air and ghost ball, for example, will completely disappear off the battlefield and then just randomly reappear wherever it feels like. It is hard to have any kind of a reaction time for it, though if players can hit it, which is rare enough, it is super satisfying.

This is not to say that combat is not fun. It is highly enjoyable when the player is in a good groove, and it’s easy to keep going back for more battles. Level ups offer a lot of helpful skills to make dungeon crawling more tolerable, from having all treasure chests highlighted to increasing our hero’s health.  It does a great job of balancing what is fun about Pong and what makes for a simple and engaging RPG. The only downside to this is that at the end of the day, there is a lot of Pong, and this game could have tried to vary the combat and dungeon crawling elements a little more to not make it feel like a slog at times. While there is a good twist on both genres, it is not perfectly executed, and it is a game where playing for long sessions is an act of frustration more than anything else. 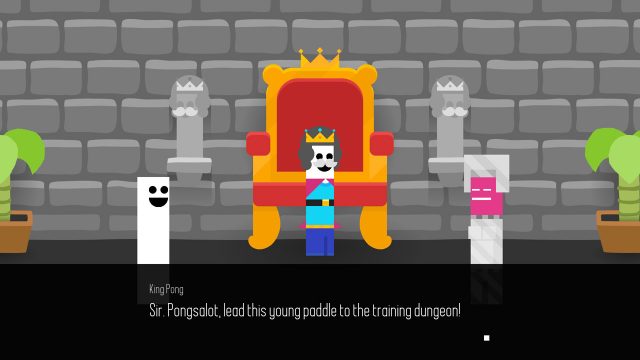 The King is full shenanigans.

Pong Quest is adorable looking, and it is one of those games where its does have a cute, if simple visual presentation. It is visually appealing, with tons of colour, but given there is only the main hub and the dungeons, there is not a lot of variety in design and is often too generic looking. In terms of a soundtrack, Pong Quest only has a handful of songs and tons of random beeboops. The soundtrack is serviceable, though the loops tend to get grating quickly.

Pong Quest can be completed in less than ten hours, though that time will vary depending on the amount of content completed. I managed to get 85% of it completed within that time, which means none of the tasks within the game are particularly challenging to complete. The problem with Pong Quest on a whole is that for a crossover, it doesn’t lean heavily enough into RPGs to be interesting for RPGamers, and by the other side of it, you can only play so much Pong before it gets stale. Pong Quest is a cute experiment that is plagued with just too much damn Pong and not enough RPG.