The Pokémon Company and Game Freak have built a strong franchise with millions of fans and several mainline entries throughout the years that has never really departed from its foundations. However, with the release of Pokémon Legends: Arceus early this year, the companies have shown a desire to explore new features and ideas. This boldness continues in Pokémon Scarlet and Violet, which rests on some long-time staples such as its turn-based combat, but explores the possibilities of an open world to both benefits and detriments. While riding on the back of an adorable Pokémon to explore this world is delightful and being able to decide how to progress is a nice touch, the story itself is regrettably mediocre.

Pokémon Violet is set in the Paldea region, a picturesque place that features 400 Pokémon and many budding trainers. Players take on the role of a recently enrolled student of the Uva Academy (Naranja Academy in Scarlet), choosing the name and looks of their young hero, as well as their initial Pokémon. After getting a quick briefing on battling and catching Pokémon, players enter the academy and are given the main quest of the game: completing a treasure hunt. This treasure hunt actually requires players to complete three diverse substories: attempting to become a champion by defeating the eighth gym leaders, retrieving ingredients from the lairs of the five Titans, and defeating the five members of Team Star, a group of mischievous but talented students. Each substory features a different set of secondary characters and brings something new to the narrative. However, these additions are paper thin and come too slowly for the story to amount to anything substantial, leaving most characters easily forgotten. 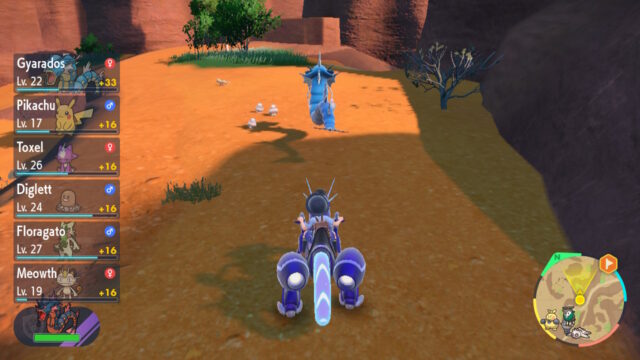 Gyarados can take care of other Pokémon on its own.

Players are given a lot of freedom from early in the game to decide in which order they complete the three substories, with the relevant points of interest marked on the map. To make this journey around the vast Paldea region more enjoyable, players are joined by their most memorable companion, a special Pokémon called Miraidon (Koraidon in Scarlet) that can be ridden to move faster. Helping to motivate players’ progression through the substories are skills that help through the rest of the adventure. For instance, defeating the Titans grants Miraidon with new skills, which include the ability to jump higher or move in the water, while getting gym badges makes catching new Pokémon easier. Each substory leads players to different activities, with players needing to break into the bases of Team Star to defeat their leaders or passing tests, which are mostly easily-completable mini games that need to be completed in order to challenge the gym leaders. However, the freedom of this open world uncovers the pitfall of there not being a clearly balanced path to take. With no clear route or at least something to mark the level of Pokémon in a specific region, trainers can readily find themselves in areas where battles are trivial encounters, even against Gym leaders or Titans, or where Pokémon are too strong to get anywhere, which ultimately forces a back and forth trying to find somewhere that matches up with their current strength. Fortunately, the fast travel option allows quick returns to previously visited locations.

Other things to do around Paldea include taking classes at the academy, which can be a helpful tutorial for those who aren’t familiar with the game’s battle system, learning new sandwich recipes, and completing portions of the Pokédex to receive rewards from the Biology teacher. Exploring this open world is fun throughout, with many items to find and varied Pokémon to catch or battle. Buying stuff for long trips isn’t a tough task thanks to the two types of currency, gold and League Points. While trainers reward players with money, League Points are obtained by advancing in the story or by selling items that Pokémon drop. Progression is also marked as representatives of the Pokémon League give players valuable items after defeating a certain number of trainers in each region. With a vast array of objects and Pokémon, traveling around Paldea is really a fun adventure where players can spend hours just exploring each mountain or body of water. There is also a decent amount of post-credits content for those who want to get more out of the game such as revisiting the eight gym leaders and participating in a battling contest. 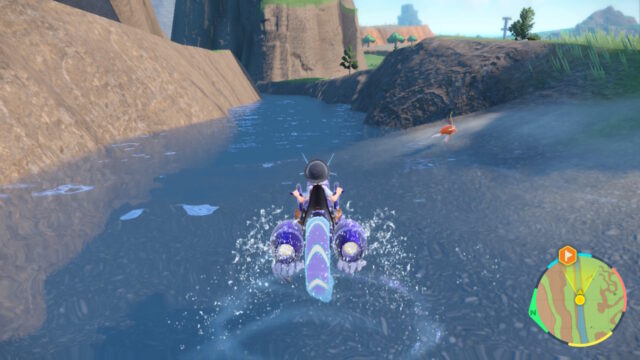 Using Miraidon as a boat is great!

The turn-based battle system is a staple of the series that Pokémon Violet totally respects, with combat being straightforward but effective. Except for a very few cases, players engage in one-on-one battles against trainers or wild creatures. All of the Pokémon basics are here; each Pokémon has elemental weaknesses and strengths, with most Pokémon having a varied set of abilities of different elements. Some abilities have no effect on others or may be super effective, and after fighting against a Pokémon once, the effectiveness of skills is displayed. All skills have a limited number of uses that can be restored by going to a Pokémon Center or by using an item. A new twist in the battle system comes in the form of a Tera Orb, which is used to Terastallize Pokémon. This empowers Pokémon and may change their type and weaknesses, yet it can only be used once before it needs to be recharged at a Pokémon Center, making it mostly a last resort. This new feature is refreshing since it can turn the tables in battle; however, it would have been more impactful if it could be used with more frequency.

As in other recent entries, all Pokémon in the six-slot team receive experience points after each battle, and active participants receive more. Pokémon can be equipped with an item, which can either prevent them from getting status effects or give them more experience points, among many other effects. The game’s Techanical Machines (TMs) teach specific abilities to Pokémon and are obtained by defeating gym leaders and members of Team Star, as well as found while exploring Paldea. Both giving items to Pokémon and being able to teach them abilities provide satisfying ways to personalize the squad. There is also a welcome variety of items that can restore health, cure statuses, or improve the stats of Pokémon. Pokémon can also be evolved by using items or simply by leveling them up. There are some crystals scattered around Paldea that lead to Tera Raid Battles where players can cooperate with others or fight solo in timed battles to defeat extremely strong Pokemon with a chance to gain juicy rewards and catch them. Tera Raid Battles are a welcome addition since they are fun and their rewards provide motivation for players to seek them out.

Catching Pokémon, by virtue of weakening them and using a variety of Poké Balls available, continues to be the most captivating enterprise of the series. The game features 400 Pokémon, a mix of returning well-known creatures and lovely new ones. Searching for specific species is made easier than previous titles since they are shown in the map and can be spotted before deciding to engage in combat. If players decide they don’t want to partake in combat themselves, their Pokémon can be sent to scout the area. While scouting, the first creature in the lineup will auto-battle against wild Pokémon, gaining reduced experience, but also obtaining loot and picking up any nearby objects along the way. This feature is a great way to explore areas where players have already caught all Pokémon and want to search for items while receiving experience without directly battling. 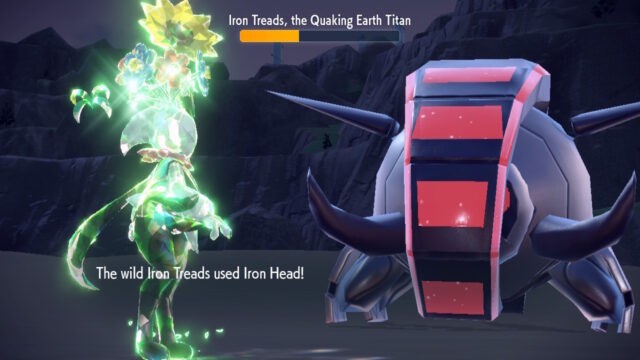 Visually, the game is really alluring, with Pokémon looking either cute, fearsome, or simply impressive. Their battle animations and Terastallized forms are also superb and invite players to try to catch them all and add them to their roster. Paldea is also home to some captivating views, with varied landscapes and diverse climates. Important characters have unique looks; however, environmental characters are not very diverse in their designs and players will see mostly the same models in all places. The score is outstanding, making traveling and battling extremely enjoyable, and features epic tunes and highly motivating tracks with great orchestrations that make important moments even more emotive. Unfortunately, voice acting is still missing from the game series, and it’s omission is notable, striking at odds with the strength of the graphics and the catchy music. There are some FPS drops and bugs that may annoy players, but on the whole they don’t hinder the overall experience.

Pokémon Violet is a highly enjoyable game. While it is hard to figure out a balanced path in its open world, it will also bring hours and hours of fun to those who want to fully explore it. Despite adding some fresh ideas, the story isn’t memorable, but the great variety of Pokémon, the art, and the turn-based battle system will surely please fans and newcomers alike.