Given how chaotic the world has been in the last two years, it’s important to find moments of calm. From a relaxing cup of tea to a good book, or even a fishing RPG, there are many great ways to unwind. Bunnyhug’s Moonglow Bay is a fantastic fishing RPG that embodies the idea of slow-moving, intentional living, and is great for anyone who is in dire need of some calm and chill vibes. The game is not without flaws, but overall it is an inviting experience for anyone missing the bygone days of the River King series.

Our story begins with the protagonist, an older individual whose spouse, Robin, passes away unexpectedly. With Robin gone, the protagonist struggles to find joy in the run-down maritime town of Moonglow Bay. That is, until their daughter, River, comes home and states that she has been tasked with revitalizing the fishing town. River encourages the protagonist to begin fishing and cooking for the town once more, as it’s apparent that the town is in dire need of someone’s ability to not only raise funds but help bring back its lively fishing community. River and the protagonist also learn of legendary fish that surround Moonglow Bay, and perhaps catching them will be the key to reviving the town in a much more timely fashion.

The story of Moonglow Bay focuses on the importance of community and how we can all chip in to make it flourish. The protagonist and her daughter spend most of the story assisting various townspeople in their day-to-day struggles, from being able to reopen the local fish market to rejuvenating the town’s aquarium. There are also a lot of important discussions about conservation, protecting the environment, and how humans can affect various ecosystems with their actions. There’s also a sweet story of a parent and child coming together to not only help their community, but also each other. While none of the storytelling is deep, it’s incredibly comforting and sweet like a warm blanket. 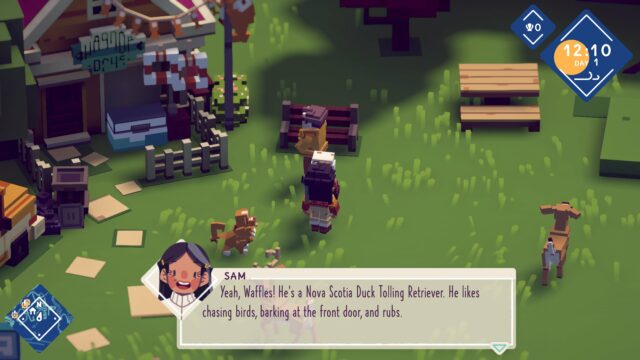 Is the Nova Scotia Duck Tolling Retriever the most Canadian dog? The Labrador Retriever says otherwise.

The game is also purely Canadian in so many ways, which is quite surprising. There are so many maritime idioms presented throughout, and little tidbits about the Atlantic provinces are nicely detailed additions. Players unfamiliar with Canadian culture or geography may not find pleasure in the game’s constant oversharing of Canadianisms, but this Canuck definitely loved every reference that played out. The writing in Moonglow Bay is charming and delightful, and every tall tale about some crazy species of fish is fun to read.

Fishing is the main attraction in Moonglow Bay, and it’s thought out fantastically well. The game offers the player four different kinds of rods, each with its own pros and cons. A balanced rod is great for all-round fishing, the poise rod is great for more aggressive fish, the agile rod can wear down speedy fish, and finally, and the strong rod is made for more resistant kinds of fish. Along with the rods, players also have different kinds of lures and bait, which they can use to catch different species of fish, and other unique tools to enhance the fishing experience. Unlike other fishing RPGs, Moonglow Bay offers players a fishing net, which can be used to catch larger quantities of fish at once, while traps can secure lobsters within the area.

Along with catching fish and trapping lobsters, cooking is the other important gameplay element as it’s the easiest way to obtain money to help regenerate the town. When players cook their catches, they are given a quick mini-game to play with timed button presses, and the order of tasks changes depending on the recipe. The more times an item is made, the more likely it is that the player will discover a new recipe. Each recipe requires some funds to create, and once made can be sold for a higher profit. Residents in Moonglow Bay will buy the items, and the cash received can be put towards rebuilding the town. Each area in the town requires a specific amount of funds to be rejuvenated. Since cooking is the primary source of income, players will constantly be crafting and replenishing their wares. The cooking mini-game is tons of fun and never truly gets old, and there’s a spark of joy that comes from both learning new recipes and seeing which food items resonate with the townspeople that day. Fishing, cooking, and collecting profits are the gameplay cycle of gameplay in Moonglow Bay, and it’s an addictive loop for sure. 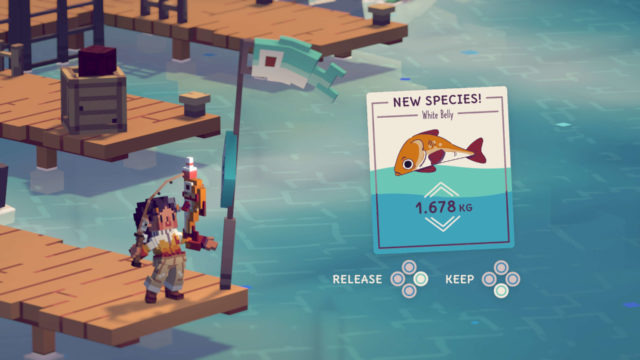 Going to catch me some White Belly and sell it to the locals!

The fishing gameplay also takes center stage in many of the game’s boss battles. Each of the five chapters in the story ends with a unique puzzle-boss fight, requiring players to use many of their fishing tools. One of the boss fights requires the player to use their fishing boat to sail around a whale that has harpoons in its back. Using the fishing rod, the player can remove the spears, though the window to cast one’s fishing line is small before the whale moves again. There’s another boss battle that requires the player to use their fishing net to remove trash to help a special creature survive in the wild. These boss fights, though not always easy to navigate, are very creative and continue to highlight many of the game’s important themes while using all of the different tools presented to the player.

The only downside to the game is attempting to play this game with a keyboard. Much of the keyboard mapping does not work in the slightest, and while the keys can be remapped, the game is so busy that it becomes difficult to remember which key does what. Playing Moonglow Bay with a controller is ideal, as the layout is simple and intuitive, and timed button presses are more easily highlighted. Another element of the game that is a bit troublesome is the map cartography, as some quests don’t make it obvious where to go or what the map is pointing to. There were a few quests where the map would be pointing to someone in town, but the quest would describe needing to go out to a specific fishing biome to do a task or find the right fish. It’s also super easy to accidentally get lost or turned around when looking for a map marker, so patience is required.

The graphics are another interesting issue. While the voxel style works incredibly well to illustrate the characters and the game’s world, it’s also insanely easy to get caught in the environment. While there is a “Help! I’m Stuck!” button in the menu, this often does not work for instances where the player’s ship gets caught or snagged, meaning the player will either need to reload a save or call a rescue boat to help them back to shore. This is very frustrating given the stuck button should apply to all areas of the game, and not just when the player is in town. There are also plenty of instances where it’s difficult to see around objects when using the boat, which contributes to the aforementioned map problems. Getting turned around because there are objects obscuring one’s view is not a fun experience and it can try one’s patience when sailing around. While the graphics have some obvious issues, it does compliment the game’s story very well. 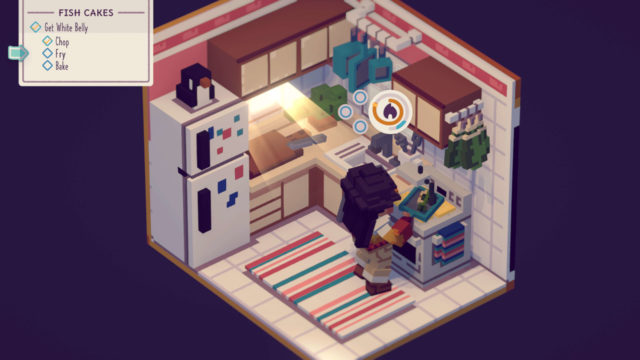 One area that deserves a ton of praise is the game’s soundtrack. Given the game is about fishing, one would expect many serene and calming tracks throughout, and the music is indeed pleasant to the ears. The many instances of songs calming the player really fit the overall chill vibe that comes when playing Moonglow Bay. From the tranquil song that wakes the player up every new day to the soft sounds that play while sailing around the different biomes, every part of the soundtrack masterfully complements every game element.

As a huge River King fan, trying to find a fishing RPG that gave me a boatload of mellow emotions has been challenging over the years. Moonglow Bay really feels like a lot of thought and care went into every aspect of the game. While not everything is perfect, it’s hard to deny the comfort that comes from chilling in your boat, catching some crazy species of fish, and sailing around to take the blues away. Moonglow Bay is the comfort food that you didn’t know you needed, and a game that constantly reminds you that you’re never alone, and even when you are, you can sail away to a better place and time. 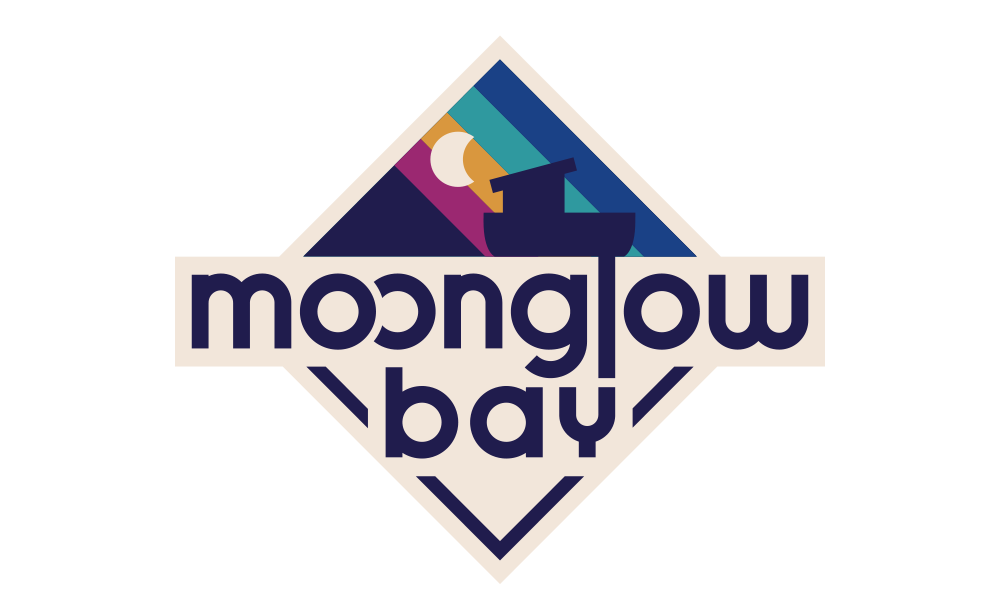