The year 2020 has been a good one for gaming, if only to provide an escape from the stress or calamity du jour. I certainly played many oddball games over the summer, the better to survive reality, and one of those games was Monster Strike, the single-player 3DS adaptation of the popular iWhatever gacha game franchise. This may have been an ironic choice, as the stress of life and the desire to forget are major themes in the game’s story.

After a decade’s absence, a young man named Ren has returned to his hometown in the suburbs of Tokyo to finish up high school, only to discover that the newest ‘in’ thing among teens and adults alike is the mysterious app known as Monster Strike, where players pit their digital champions against each other in frantic, ballistic combat. As Ren struggles to fit in at his new school, make friends, and reconnect with his old life, serious questions are raised over the origins of the app, of the monsters, and of the company that provides them both.

Ren’s own first experience with Monster Strike accidentally summons up a diminutive red devil-dragon thing named Oragon who insists on tagging along in the real world, and it is soon apparent that other monsters do not need the app at all to manifest through gates in reality. Finding the stressed and the repressed among the general population, these free monsters slowly infiltrate Tokyo through possession, and Ren’s team of Strikers gets pulled into many messes before the reasons behind the chaos become clear. How he gets the team together takes up the first four chapters in itself, with some strong, fun characterizations and plentiful use of the Power of Friendship tropes common to school-based anime series.

The story for this game follows a lot of common anime tropes, and does so quite well, so the overall impression is similar to that of Digimon or Persona without being an obvious knock-off of either. The plot is surprisingly robust for a gacha game spin-off title. On the face of things, it’s based on the anime series which ran from 2015 to 2016, but it quickly spins away into a new story with the same characters and some of the same random scenes.  In the end it comes a very different but satisfactory conclusion. 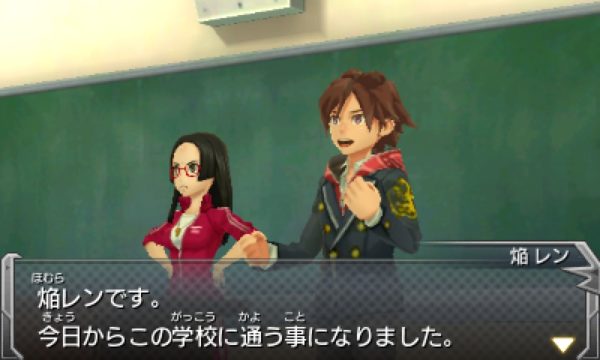 How every school-based game or anime must begin.

As mentioned above, the core game of Monster Strike (3DS) is essentially ported wholesale from Monster Strike (mobile editions). Player units appear on the field as stylized marbles, to be flung around so that they ricochet off of anything and everything. Allied monsters have special abilities which activate when struck, including such things as blasts, booms, broadsides, and an energy tether that deals constant damage to anything on a line between the tether’s anchor and the ally in motion. Enemy units have one or more timers on them to denote how many turns are left before they attack, and in later stages there is a variety of gimmicks and hazards to avoid. Tailoring a team to avoid certain issues adds welcome elements of strategy to a game that is largely just fantasy marbles.

The original mobile touch controls are still present to a degree, but the 3DS game is playable with just the buttons. The joystick lets the player pull back and aim the strike, to be released by a press of the A button. The X button activates super abilities if they’ve had time to charge, and that’s about it for combat controls. For reference controls, the D-pad buttons give the player a quick look at the party monsters’ stats and abilities.  Unfortunately, the game retains the need to tap the touch screen or press A to grab the rewards from a big battle before it all disappears, so the player must remain vigilant even after the boss is gone, lest they lose out on coins and monster eggs.

One way that the 3DS game differs is in how it reduces the levels of ‘fun pain,’ i.e. the carefully balanced mix of difficulty and reward that mobile phone gacha games utilize to keep the player wanting to try it again even as they keep dying. In this version of Monster Strike, it’s surprisingly manageable, at least for the main bulk of the story campaign. The player is given some fairly strong monsters from the start, and the gacha machine at the arena is quite generous. Gacha tokens are gained from person-to-person battles, and new monsters are gained from every boss battle. It’s only late in the game and into the post-game that the pain returns, where to be competitive one will need specific monsters for fusions — only those monsters are gated behind difficult battles themselves. The combat is still enjoyable, but there is a significant shift in the challenge level.

Monster Strike has three sorts of free battle, though they’re all organized in more or less the same manner. First, monster gates open randomly throughout the game’s areas, showing up on the map as white dots. Regular gates are good for getting fodder monsters for basic stat boosts, while signature gates have visible lines of dark energy arcing from them to announce the presence of major monsters. Ren’s little buddy Oragon can identify the enemy’s element and sometimes their identity, but even with that foreknowledge and strategic planning, these fights are difficult. Gate battles sometimes provide new playable monsters for the player, though the drop rate is pretty abysmal. 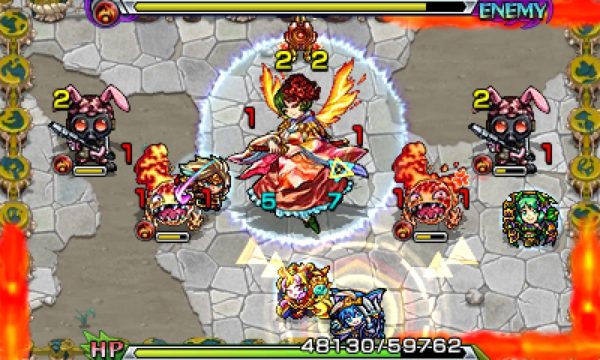 Be careful how you bounce.

Second, possessed humans show up on the map as black dots, and battles with them will always feature a stronger, named monster. While there is also a chance of a monster drop with these battles, the big reason to pursue them is the fact that they also give gacha tokens upon victory. The last sort of battle are quests offered at a counter in the arena. These require a full team to access, and so are not available until several chapters into the game, with the higher-level quests also requiring coupons that only come into play in the post-game.

Monster Strike borrows its entire visual aesthetic from the original game and anime, which is generally a good thing. While there is always more that could be done, the main town and Shibuya have a good variety of locations that are visually distinct, and nothing appears to have been diminished by the experience. Likewise, the music and voice acting both benefit from the deeper resources provided by the anime. Inevitably, there were some interesting choices made, particularly when it came to making certain monster depictions into cute girls, but that’s as would be expected from a Japanese property. For the record, loli-goth Oda Nobunaga is as cute as she is powerful.

This is a game that would seem to be a natural choice for a spin-off. It had an assured fan base and a deep well of material upon which to draw. By all accounts, it did very well in sales when it debuted in 2015, bumping no less than Monster Hunter Generations from its top spot. Despite all that, Monster Strike is also a very cheap game on the secondhand market now, and any budget-minded game importer could likely get it for a decent price. The fact that it provides a good amount of gameplay for its price point is only one more strike in its favor.