Well, What if There Is No Tomorrow? There Wasn’t One Today.

There is something in the human psyche that causes people to root for underdogs. Most people can sympathize with the feeling of fighting through tough times when it seems the odds are stacked against them. That subconscious bias in favor of the little guy likely adds to the sense of affection I have for Little Witch Academia, an animated property that began its life as a short film produced for a competition for young animators. It expanded with a successful Kickstarter to create a feature-length production and last year culminated with the creation of a full season of shows released in the West on Netflix. Now, developer A+ Games has taken on the next chapter of this underdog story by converting the show into video game form with Little Witch Academia: Chamber of Time. Unfortunately, while Chamber of Time does a masterful job of capturing the look and feel of the show, the tedious gameplay and other poor design decisions mean that rather than being an underdog to root for, this game is just a dog.

Little Witch Academia stars Atsko “Akko” Kagari, who has wanted to be a witch ever since she saw a magical performance by Shiny Chariot as a young girl. To follow her dream, she enrolls in the Luna Nova Academy, an institution dedicated to training young witches and the school that Akko’s idol Chariot once attended. Growing up in a non-magical household, Akko starts school with basically no magical knowledge, earning derision and disdain from many of her classmates. But Akko won’t let anything stop her from learning magic, meeting Shiny Chariot, and showing the world just how amazing magic can be.

Instead of simply rehashing the plot of the show, Chamber of Time sidesteps any potential narrative problems by being set over spring break during the middle of the show. As a result of her lack of magical skill, Akko accidentally destroys some magical supplies and is sentenced to detention organizing the library. While putting away some books — one of which, unbeknownst to Akko, was placed on a table by a mysterious ghost — she unlocks a secret door hidden behind a bookcase. Unfortunately for Akko, this door protects the Horologium Chamber and by entering the chamber, she has broken a magical seal and now the flow of time itself is broken, dooming Akko as well as her friends Sucy, Lotte, and a few other familiar faces from the series to relive the same day over and over until they can fix time. The story is one of the game’s strengths; it feels like a lost episode of the show and the dialog captures the characters perfectly. Solving the Seven Wonders of Luna Nova as well as discovering the story behind the mysterious ghost in the library is a treat. The game also does an excellent job of introducing players unfamiliar with the show to the cast of characters and quickly gets people up to speed with the important parts of the story.

The gameplay is split into two parts: half of the game is spent exploring a 3D recreation of Luna Nova while the other half is a series of 2.5D brawler dungeons. The exploration half is the stronger part of the experience, putting players in the shoes of Akko, traveling around the school solving characters’ problems, as well as finding hidden items. There is an on-screen clock, which is important because every two hours characters will change their position in the academy. Sidequests will sometimes involve following characters around the academy while others may involve preempting another person’s discovery of an item at a certain time of the day. It’s an interesting mechanic that’s fun when it is used to good effect, rewarding players for paying attention to small events. Akko can also use magic (with the help of boosting potions she can purchase from the academy store) to unlock new areas as well as solve puzzles and sidequests. 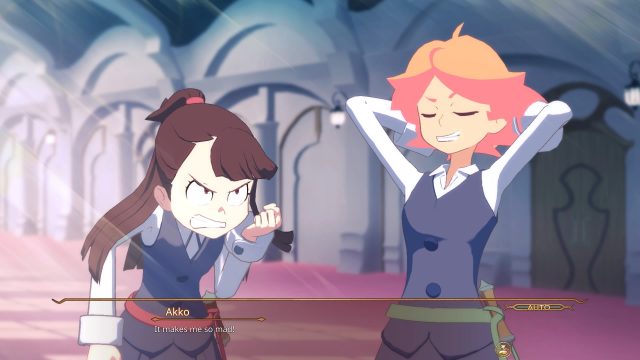 The characters are all incredibly expressive.

The exploration highlights the incredible job that A+ Games has done turning Luna Nova into a living, breathing place to explore. Chamber of Time is a visual triumph, with the characters and backdrops perfectly capturing the look of Studio Trigger’s original show. The character animations themselves bring the experience to life. Whether it’s Akko’s leaning in and cupping her hand to her ear to eavesdrop on a conversation, Jasminka eating and offering up her favorite cookies to anyone she talks with, or Diana flipping her hair as she makes an important point, these subtle touches really help capture the essence of the characters. This is also aided by excellent voice acting (Japanese only with English subtitles) for all characters. Even background conversations between unnamed characters in the hall merit voice acting. The music is also excellent, mostly being repurposed from the show, with sweeping and upbeat orchestrated tracks that perfectly complement the lighthearted nature of the game.

However, as the game progresses, the cracks begin to show even in the stronger half of the experience. While exploring Luna Nova is fun at first, load times encountered moving around the school start taking a toll. The academy is split into fairly small rooms and areas, with loading times of five seconds or more every time Akko goes through a door. This means that going from the fourth floor of the school building to the courtyard could involve a minute of staring at a blank loading screen. This problem should have been solved by the included fast travel system, but this too is limited by being tied to save points. Not only are save points the only places that can be traveled to and from, but it even requires a consumable potion. Also, while time can be freely manipulated — an important feature as certain characters appear or events happen at certain times of day — it can only be done from Akko’s room, necessitating lots of extra travel. These load times and unnecessarily long travel times interrupt the flow of the narrative and players will come to dread when quests require schlepping to one side of the school and back again.

The game also vacillates between spelling out too much of what needs to be done and being completely obtuse about the objectives. During the all too frequent fetch quests, the locations of the items needed will be exactly displayed on the map. Occasionally though, there will be a quest when an important person’s location or the time they appear is left vague or the player will be given no direction at all, leaving them to wander the school aimlessly or return to Akko’s room to experiment with changing the time of day. 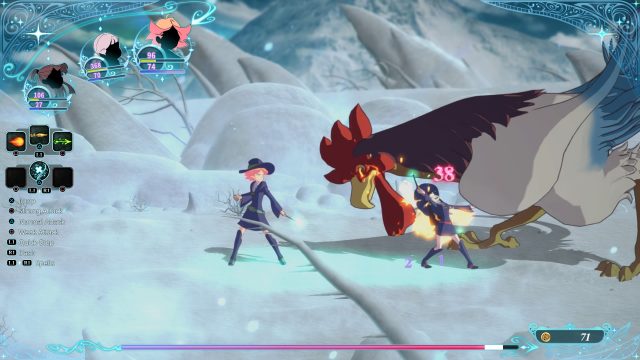 Luna Nova provides hands-on experience: you’ve got to wrangle your own dinner.

While these flaws are frustrating enough, Chamber of Time really starts to fall apart once combat starts. This half of the game involves delving into the Horologium Chamber and brawling through dungeons. Seven story dungeons, as well as numerous optional ones, are accessed through a door in the chamber that opens to different dungeons depending on the key used to open it. The game uses typical brawler-style combat with light, medium, and heavy attacks being supplemented by spells that can be equipped and upgraded. All the characters share the same basic pool of spells (with only a handful of spells being character-specific), which can be upgraded universally across the entire party. All seven characters have individually upgradable attributes with five different categories to pour experience points into. The characters all have unique strengths and weaknesses and react accordingly in combat.

On the surface, this appears to be the description of a generic brawler, but the execution leaves Chamber of Time far short of that low mark. The majority of combat is tedious, with dungeons broken up into individual rooms where players must fight their way past enemies that pose little danger. Occasionally, an enemy will be knocked offscreen, leaving the player to blindly shoot off-camera to kill it in order to proceed. The combat itself feels sluggish and makes these sections something to be endured rather than exciting entertainment.

Players choose three characters to take into each dungeon run, with only the leader being player-controlled. There is no way to change characters in the middle of a dungeon, nor can players issue commands to the other party members. This might have been acceptable if the AI for the party members was good, but it is not. The poor AI doesn’t pose too much of an issue while venturing through the repetitive rooms to get to the boss of each dungeon, but it significantly hampers boss fights. 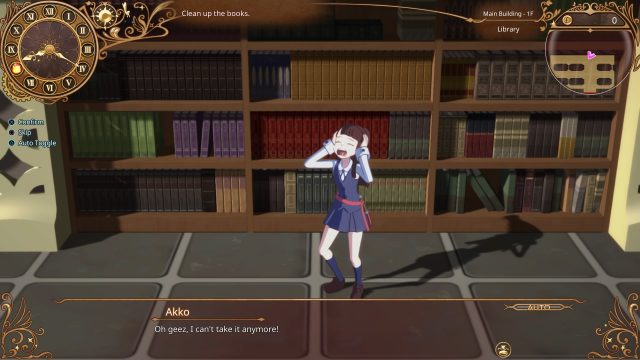 I couldn’t take it anymore either, Akko.

While none of the bosses are difficult, several of them have movement patterns that leave short windows where they are vulnerable to attack. The ally AI will freely waste magic while the boss is invulnerable to attack but won’t attack when the boss can actually be harmed. It makes several of these encounters needlessly long as the player is left to peck away during those brief moments of vulnerability. Also, the patterns of the bosses themselves seem off, with minutes going by without an opportunity to do damage. The majority of encounters were straightforward and easy, but those that involved a limited window to attack were incredibly frustrating. This is exacerbated by the game requiring the replay of these dungeons multiple times, forcing players to relive the weakest parts of the game.

Chamber of Time is an incredibly uneven experience. It’s an amazing recreation of the Little Witch Academia universe with impressive art and fantastic voice acting. However, that accomplishment is squandered by how tedious the navigation of the academy becomes, bland fetch quests, poor AI, bad boss design, and sub-par combat. This could have been a good game with better choices, but instead it’s difficult to recommend to even the most rabid Little Witch Academia fan, much less the broader RPG-playing public.