It’s hard to imagine the circumstances leading to the western release of Kowloon High-School Chronicle, a remaster of the 2004 Japanese PlayStation 2 exclusive Kowloon Youma Gakuen Ki. Featuring a hybrid visual-novel/first-person dungeon-crawler set in an Egyptian-style tomb under a Japanese high school, the experience of Kowloon High-School Chronicle in 2021 is very much informed by the games which came after its original Japanese version, most notably the modern iterations of the Persona series, also featuring Japanese high school students battling demons. It is interesting both as a relic of a former era and as a game for modern audiences. While the gameplay can be stifled by the constraints of age, Kowloon High-School Chronicle is a uniquely engaging experience that may satisfy fans of seemingly disparate genres.

The game sees players controlling a transfer student to the mysterious Kamiyoshi Academy in Shinjuku, Tokyo. Despite the character’s outward appearance as a normal student, he is actually a treasure hunter with the enigmatic Rosetta Society tasked to discover the secrets of a ruin hidden beneath the school. The game is stylistically presented as an anime series, complete with opening and closing songs and transition screens between game modes. Each episode (known in-game as a “discovery”) consists of a full school day, with players exploring the campus and returning to the dormitory before heading down into the dungeon. The school day portion of the game is more or less menu driven, with the player represented by a cursor on a map of the campus. Formal exploration is strictly left for the crypt below campus, and while it initially feels restrictive and overly linear, there is a tautness to the gameplay loop, if not necessarily each gameplay phase.

During the school day portion, players visit rooms and interact with classmates through the use of a conversation wheel allowing players to respond using various degrees of emotional intensity, and influencing their relationships with these characters. If the player meets specific conditions, many of the characters can become “buddies.” The buddy system is the closest thing to a party, as the player can usually bring two buddies into the dungeon at a time, deploying various abilities and other status effects. There are nearly two dozen of these companions, all featuring distinct characterization and personalities. The school day portions are a bit heavy on text, including a segment of circling the map to collect items and short conversations with classmates. Thankfully the presentation of the school as a map streamlines the process. 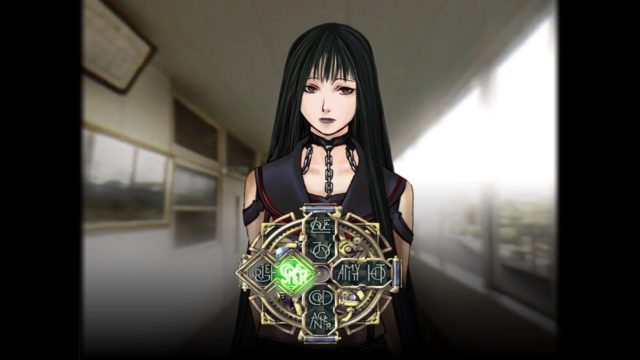 The conversation wheel itself is difficult to decipher at first.

Dungeon exploration is a bit of a mixed bag. The game drops the player into the central hub of the dungeon where nearly every door is locked, but as discoveries are completed, these doors unlock. While each section of the crypt is fairly short and straightforward, there are a number of puzzles to solve with little assistance or suggestions on how to solve them. While a more modern game might provide a tutorial on opening a locked door or activating a fire puzzle, Kowloon Chronicle expects the player to largely intuit the solution. Players will be stuck if they don’t try to mix specific items to create an acid solution powerful enough to melt a lock or combine charcoal with a tissue to create the item that solves a puzzle. The hints provided are buried, either in a riddle or in a sub-menu in the game. Despite being helpful, they are often obscured by an under-explained mechanic: if a player’s “history” sub-statistic isn’t leveled high enough, they will be unable to translate the stone slate to view the riddle.

Battles take place in determined locations of the dungeon, yet enemies will regenerate if the player leaves the dungeon. The player expends Action Points to move in the field and use specific weapons or items, including reloading weapons. Players can equip three weapons to be deployed during battle: firearms, hand weapons, and grenades. While melee weapons do not provide much breadth in attacking, ranged weapons allow the player to target specific parts of an enemy. Each enemy has a designated weakness and the game practically mandates the player exploit these.

While the battle system boasts many options, there are problematic balancing issues. Ordinary encounters require a study of enemy weaknesses in order to survive. While spamming exploits during random battles is somewhat expected, it is disheartening to suffer through a failed boss battle or two only to discover a weakness which handily defeats the boss in two rounds. This balancing issue really dampens the enjoyment of the battle system, as it undermines the tension in both gameplay and narrative during encounters with some impressive boss designs. It’s a shame the battle system falters in this regard, especially as marginal tweaks could remedy this issue and require actual strategy during boss fights. 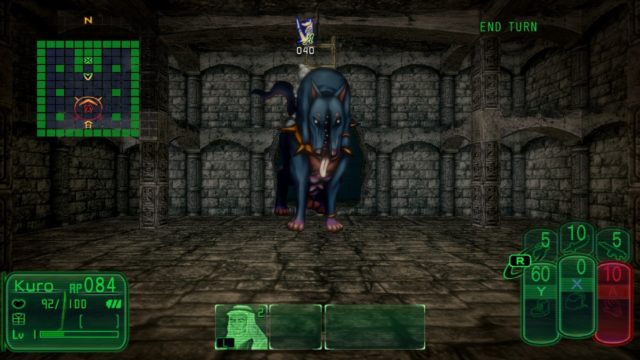 Enemies are subject to the same Action Point constraints as the player.

Graphically, the game is obviously a relic from the PlayStation 2 generation. The first-party exploration sequences are certainly not a testament to the capabilities of the Switch (or, frankly, the PlayStation 2) but possess a nostalgic charm that still may not be enough to satisfy a modern audience. The updated enemy models are a bizarre mishmash of Egyptian imagery and body horror anime which renders effectively creepy. The music is moody and sparse but features some highlight tracks. The soundtrack is heavily jazz-influenced replete with large brassy sounds and a few catchy themes.

The plot is over the top from the start. The game features possessed dolls, alien abductions, an ominous cult, and a possibly murderous student council serving as gatekeeper to the tomb below the school where bizarre disappearances are occurring. The end result is a hypnotic mix of Egyptian occult, survival horror, and high school anime tropes. There is nearly endless commitment to this aesthetic, as the player is expected to balance their stats on a sheet of notebook paper between battles with flying vampiric sarcophagi.  While the game generally works, a few aspects have not aged well. The survival horror themes are a great touch,  but the outdated mechanics are not as welcome. Item management and customization is bulky and cumbersome, feeling directly taken from an early Resident Evil game. The concept of item mixing is interesting but its implementation too spotty, mitigating the effectiveness of the mechanic altogether.

Aside from the main storyline, players are able to indulge in a series of quests issued by the Hunter’s Guild as well as a separate, PC-style RPG accessible on the computer in the dorm. These quests involve solving riddles to hunt specific monsters in the dungeon. While the riddles are purposefully vague, some are positively confounding. The episodic structure breaks the game into digestible chunks, perfect for handheld consumption on the Switch. There are few performance issues for this port of a 17-year-old game, although busier boss battles can feature irritating slowdown.

Kowloon High-School Chronicle, a story about hunting for lost relics, is a relic in its own right. The comparisons to both older and modern Persona games are inevitable, but there is much more here under the surface. Kowloon High-School Chronicle is certainly a historical oddity, but its zany storytelling and confluence of disparate genres makes this trip back to high school worth it.