Developer Ember Lab’s Kena: Bridge of Spirits is a charming title. Following young spirit guide Kena as she attempts to cleanse a mountain village of its corruption with the help of other spirit companions called the Rot, the game successfully uses the developer’s animation experience to evoke a gaming experience akin to 3D animated movies of recent years. While ultimately the gameplay doesn’t quite live up to the promise of fantastic visuals, the overall experience is nonetheless an enjoyable and worthwhile one.

As a spirit guide, Kena is tasked with helping those who remain in a limbo between the physical and spiritual worlds, often due to the trauma associated with their passing. In search of the sacred mountain shrine, she learns of the corruption that plagues its surroundings and causes monsters to appear. She comes across an abandoned village while picking up the small, black — and adorable — creatures called the Rot, who help her in several ways. On her adventure she learns what happened to the village while helping those she finds in order to unlock the path to the shrine that will allow her to fully clear the corruption. 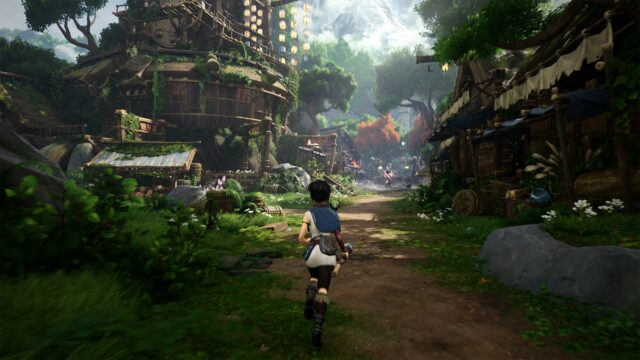 As players progress through the game, they uncover what happened to the abandoned village.

Kena’s visuals are its definite strongest point. There are Balinese and Japanese influences in the setting and buildings, and the lush environments and detailed character designs are pleasing to behold. The animations are great, particularly all of the interactions the Rot have with each other, Kena, and the environment that bring the cute spirits to life. Beautiful vistas are plentiful, and the way the corruption is applied works great too, effectively showing the decay while still hinting at the beauty that cathartically blooms when Kena removes it. The only minor complaint is likely reserved for those playing on older systems and consoles. Kena: Bridge of Spirits definitely feels like one designed to take advantage of next-generation consoles and higher-spec PCs; there are points where it’s clear the base PlayStation 4 is at its graphical limit, though there are no issues with performance and frame-rate.

The game’s audio carries its visual inspirations with gamelan-inspired instrumental music. The music provides a pleasing backing to the exploration and extra weight to emotional scenes, and the game features a nice touch of it dying out whenever players enter corrupted areas and returning when they are restored. It would be nice if more of the cultural aspects of its Balinese inspirations were more heavily involved in the game, as outside of the spiritual and visual elements there’s very little to really distinguish the setting. The cast is small, but all of its members make strong contributions to the story. Kena is a thoroughly likable protagonist, though it would be nice if more time was spend on her personal story as it largely ends up as a small note in the background. However, the individual character stories of the villagers are touching, with solid performances from the game’s voice actors, and there are thoroughly satisfying conclusions to each of the game’s chapters and the adventure as a whole. 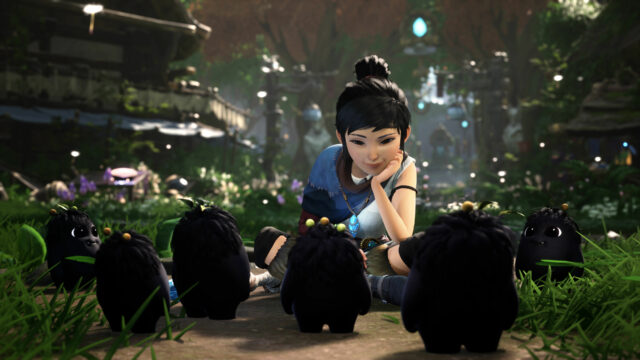 Kena and the Rot’s interactions are a big part of what makes the game a visual treat.

Kena: Bridge of Spirits’ biggest issues are in its action combat. It’s pretty standard fare, with Kena having initial access to a dodge, spirit shield, and basic and strong melee attacks, with new options such as a bow and bombs unlocked later on in the game. Meanwhile, the Rot get usage in combat for healing and distracting enemies. On the normal and higher difficulties combat is very punishing, as Kena can only take a small number of hits and healing options are very limited. In addition, avoiding attacks feels unnecessarily difficult thanks to an awkward camera and controls that make it hard to react to attacks of enemies, and bosses have large amounts of health. Fortunately, the easy option significantly tones down enemy aggression and ensures that players will be able to get through the combat sections without many issues. On the plus side, the game ensures each boss fight is a notable occasion, and the variety of enemies ensures that players get familiar with all of the options in Kena’s arsenal as some can only be damaged in specific ways.

The rest of the game is made up of exploration and platforming puzzles, which are engaging and satisfying and just the right amount of challenge to not be frustrating, even if there is little that 3D adventure players haven’t seen before. Here the controls work much better; there were still some accidental presses of the wrong buttons, though at least the game simply puts players back at the previous safe spot if they fall. A few of the paths to progress can be missed at first glance, but carefully examining the surroundings will usually be enough to let players see where they need to go or what they need to do to advance. The puzzle elements are enough to keep players engaged but still able to relax and enjoy the pretty visuals and exploration. 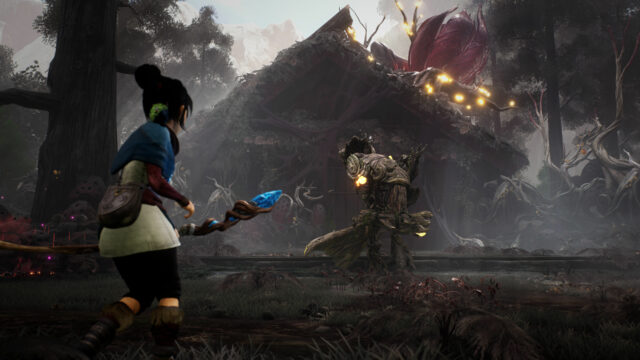 The combat’s challenge feels unearned thanks to the awkward camera and controls.

There’s very little in character customisation and growth. All of the important abilities are unlocked as part of the plot, but Kena has access to a small number of upgrades that provide additional combat options but aren’t needed for completion, and can increase her health by finding mediation spots. Other than that, players can find things like additional Rot, hats that can be bought and given to the Rot, or resources to purchase said hats. It’s all for for the completionist’s sake, but the pure enjoyment adventuring through the setting, and great visuals make it worthwhile.

As its first major release, Kena: Bridge of Spirits must be considered a success for Ember Lab. There are areas where significant improvement can be made, especially its combat, but the game provides a strong base to build upon. The overall gameplay will be very familiar to 3D adventure fans, but the visuals and charm help to make it feel like a fresh experience in the genre. More adventures for Kena and the Rot would be very welcome.