Although its lead-up gave the impression that Harvestella was Square Enix and Live Wire’s take on the budding farming sim and action RPG hybrid sub-genre, it paints a slightly misleading picture of what the game is all about. Its narrative ideas go much further than suggested, and rather than being all about the farming and cosiness that we’ve come to expect from the sub-genre, the systems and setting are used as tools to what the game wants to be rather than its main prerogative. With a conclusion that pulls off its surprisingly high-minded ideas, a highly addictive gameplay loop, and a fantastic soundtrack, Harvestella ends up being one of this year’s most pleasant surprises.

Harvestella sees the amnesiac player character waking up near the village of Lethe during an ethereal event called Quietus. Finding the populace hidden away in fear, it isn’t long until they pass out again, only to be saved by the village doctor. Upon reawaking, players learn that the world is governed by the Seaslight, giant crystals that control the seasons. However, between the seasons comes Quietus, a season of death that poses a threat to all life that ventures outside during it. Shortly after, players encounter a girl named Aria, who claims to be from the future, and the two start investigating the Seaslights as strange occurrences begin happening around them, while the protagonist is also gifted a previously unoccupied farm on the outskirts of Lethe so that they can make a living.

Players are swiftly introduced to Harvestella’s daily structure where the day progresses in real-time, starting at 6am and giving players until midnight to accomplish what they wish during the day. The game’s first few chapters largely deal with learning about and solving initial issues with each of the Seaslight and the towns around them while recruiting a party of allies. However, the story soon takes some major turns. Some of those turns are given strong hints and players can easily make some accurate guesses before they are directly revealed, but nonetheless the game’s execution of its story ideas is excellent and players will hungrily aim to progress and see where the game is going to take things. Harvestella aims high with its narrative and it’s pleasing to report that it sticks the landing. 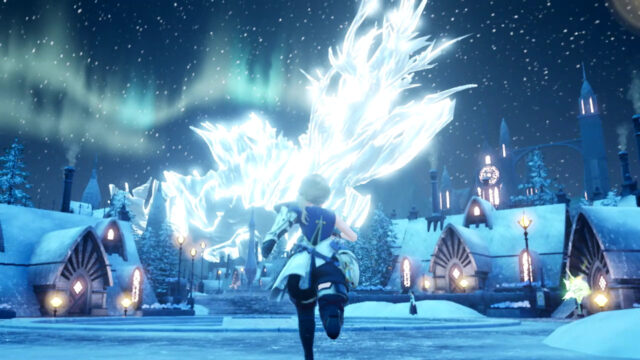 The Seaslight rule over the seasons.

Ably supporting the excellent main story are individual character arcs for each of the player’s allies and a good number of additional side quests. A few of the character themes are quite similar, but the writing and emotion behind them are still very well handled, and there are plenty of other side stories that are immensely heartwarming and emotional. The main cast is appreciably memorable and varied, with their individual stories fleshing out their histories and motivations as well as offering plenty of growth as they figure out their goals or places in the world. The combination of the writing, character stories, and the hard-hitting main plot link up superbly for a stellar narrative backbone.

One easily falls into an engaging and enjoyable routine of spending the early hours maintaining the farm, while the rest of the day is spent accomplishing other tasks. This might be advancing the main story, completing side content, or working towards upgrades or other actions to benefit the farm or future adventures, such as finding and obtaining more ingredients, crafting new tools or machines, or cooking. Even if some days are lighter in direct activity and story advancement than others, the game always provides a good sense of progress towards one goal or another. The farming systems have just enough depth to stay engaging, but also allowing players to develop an ideal trade-off and optimal pattern to ensure they have enough time for their other goals.

The nature of the game allows the farming systems to be the primary support to the action RPG and story advancement, providing players with their own tools for preparation as their main sources of income and healing resources. All healing is done by eating or drinking prepared food, using ingredients from the farm or elsewhere, which also replenishes the stamina gauge that otherwise quickly runs out and prevents any further actions, including in combat. Carrying a decent set of healing supplies is vitally important for how the game’s combat system works too. 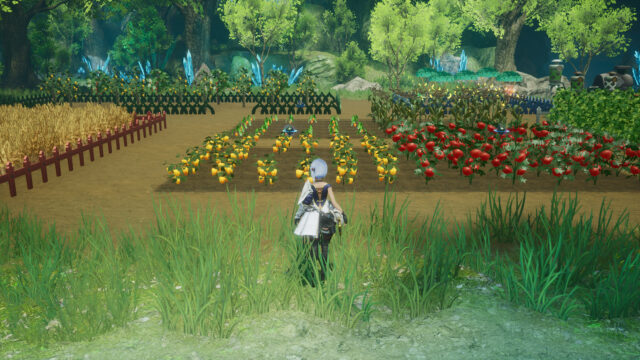 The farm is great for ensuring a steady supply of money and healing resources. Yours probably won’t look this neat.

Harvestella’s action combat system is ultimately simple and straightforward, though has enough to it to stay sufficiently engaging for the game’s length. Players are able to choose from a selection of jobs imparted to them by their allies. Up to two allies can join players in the game’s dungeons, both of which are fully AI controlled and stick to their own jobs. Three jobs can be equipped at once and switched between during combat, with a cooldown until the previous job can be returned to. Each job has a singular basic combo as well as three unlockable skills, each of which has its cooldown after being used. There’s a good variety to the jobs, and the game doesn’t enforce swapping between them, so it’s easy for players to find the ones that best suit their style.

Most encounters are limited to a quick engagement that lasts a few combos and the occasional avoidance of some telegraphed hits. The bosses are much more serious encounters, requiring that players pay attention to the mechanics and take evasive action from multiple types of signalled attacks. There is a dodge button, which when held allows for a heavily stamina-depleting sprint, but this is best reserved for avoiding those powerful hits as it’s almost impossible to avoid most regular attacks, especially if one of the player’s allies hasn’t drawn enemy attention. There are elemental and weakness aspects, though players can get by without paying too much attention to them. Being knocked out in combat, which will happen quickly once the in-game clock gets past 10pm, simply sees the player waking up the next morning.

Each dungeon takes multiple days to work through, but as players progress they unlock shortcuts such as ladders or Monolite crystals that they can fast-travel between, providing useful markers where one can call it a day. The dungeons have a linear path, but there are enough elements in finding that path to retain interest, and a good number of nooks and crannies where players can find treasure chests or other resources. There are optional obstructions that can be opened with repair kits or bombs that lead to additional chests. The game does a good job of lightly increasing complexity as it goes on, adding obstacles such as damaging floors. By themselves the dungeon-crawling and combat elements aren’t especially notable, but they do the job in facilitating what the game does best. 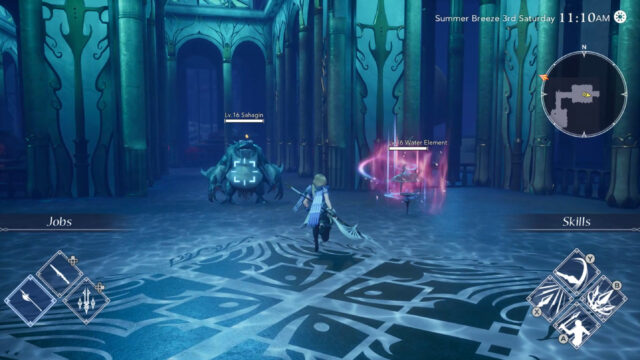 Players will visit numerous dungeons that take multiple days to work through.

Character growth is likewise fairly straightforward. Standard experience and level-ups are only awarded at the end of the day, granting simple boosts in the small selection of attributes. There is no armour to speak of, but players can equip a small selection of accessories for passive boosts. Jobs are upgraded by equipping them; players are awarded points that can be spent unlocking skills or upgrades to those skills and regular attacks. The blacksmith in Lethe village provides the biggest single boosts with players gaining weapon upgrades for themselves and their allies, which require money and the necessary ingredients. Lethe village is also home to the renovator, who similarly provides vital farm upgrades.

How substantial the post-game is will largely depend on how much side content players did during the game. There are some things unlocked in the post-game, including two additional jobs and the ability for players to select a life partner from the allies whose character stories they have completed, but otherwise the post-game content is all about being a completionist: fulfilling all requests, any side quests not done, and fully upgrading everything. There aren’t any regular events, festivals, contests, or the like that are otherwise common in the sub-genre. But even so, Harvestella is a meaty and thoroughly satisfying title, more so than players are likely to expect going in, and completing the main quest plus the character stories and side quests will happily run up 60 hours.

Harvestella’s soundtrack is handled by Go Shiina, who does a masterful job of giving an audio backing to all of its elements. It’s an excellent, varied, and memorable score that hits all the right notes. From the relaxing and upbeat pieces for the towns and farm to the exciting battle themes that feature some of his notable vocal stylings, as well as the event tracks that add to the emotion, it’s very easy to get caught up in the music and appreciate the work that has gone into it and atmosphere it generates. The game’s limited voice acting is unfortunately relegated to small gameplay and combat snippets, without any for the event scenes, but the fantastic music at least makes up for it. 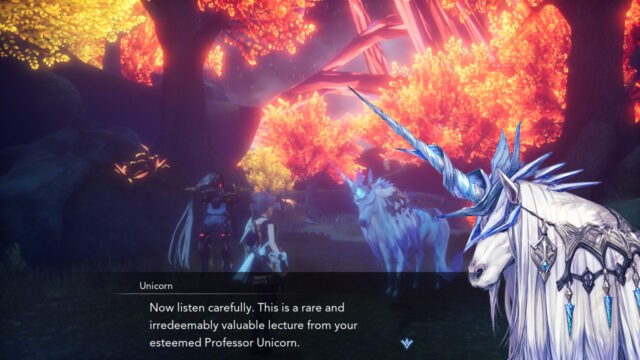 Important information is about to be imparted.

The lack of voice acting and the visuals demonstrate the game’s more limited budget. There are clear restrictions for the models and animations, but the game is still pretty to behold, and the team has done fine work to ensure the environments in particular look great despite those limitations. The artwork and designs behind them are excellent, though there is a very limited variety of distinct enemies. Even the smaller touches are great, and the ingredient and meal artwork definitely helps foster one’s appetite.

While Harvestella’s combat is certainly not the strongest, its supporting elements provide such a strong base and structure that the game still readily rises up above the large crowd of titles released this year. Harvestella somehow manages to pull off some highly ambitious storytelling, accompanying with it a highly satisfying gameplay loop that is hard to put down. The game has a much stronger and widespread appeal than many may have been lead to believe heading into its release, and is an easy recommendation.