You Should be Downstairs with Them

Guild of Dungeoneering, a PC release from Gambrinous, attempts a combination of deck-building card games and dungeon crawling, with roguelite glue and a cheeky sense of humour to hold it all together. The resulting structure is mostly stable, but shows a few seams and rough edges.

The story follows a young clerk being ejected from the Ivory League, the land’s greatest guild of dungeon delvers, who decides to start his own adventuring guild with the customary blackjack and hookers that go along with a new enterprise in the mould of one’s last enterprise. Players take on the role of the Guildmaster, sending wave after wave of hapless murder-hobos into the wilderness in hopes of bringing back riches to upgrade guild facilities, ensure the safety of the region, and expose the treachery of their former league or something. It’s mostly about the loot, though. All this is narrated by a snarky fellow with a mandolin and a drum.

The Guildmaster is a quasi-omnipotent entity that shapes the world around the poor adventurers he sends out into the dark monster-infested corners of the land. Each round starts with the player drawing a hand of dungeon cards, which feature corridors, chambers, monsters and treasure. The player gets to lay down three of those in the hopes of building up their adventurer as they move toward the end goal of the dungeon. Combat is also resolved with a card game — each character’s class and gear creates a combat deck with different effects which are dealt one at a time to slug it out with the various beasties of the game. 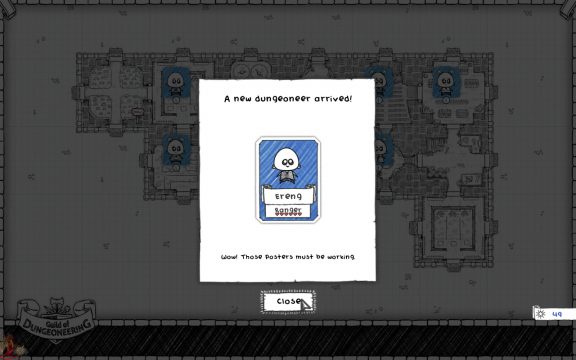 Meet the new ranger, same as the old ranger.

The game does not do much of a job of explaining the mechanics. The tutorial consists of watching the game take a turn for the player, without any explanatory text, so the underlying logic of how combat action resolves or how dungeoneers decide to move about is left to the player to muddle out over a few playthroughs. Everything has tooltip hover text but there are keyword-based rules exceptions that aren’t explained in all their instances. For example, ‘Swift’ attacks resolve damage before any other effects and this is explained on swift attack cards, but any character class or gear drop that grants or modifies that property will leave the player hanging.

The roguelike elements feature in that there is character permadeath, although it is meaningless. The character will be instantly replaced by a new one in the same class. Gear doesn’t carry over between successful sorties anyhow, and the only benefit of experience is extra health. Ultimately, victory means a big pile of loot that might or might not let the Guildmaster afford new building expansions and nothing else. Either way, the next run at the dungeon will start with the player building a small corner full of low level monsters and treasure in hopes of the random number generator granting the gear needed to run at the boss of the dungeon. 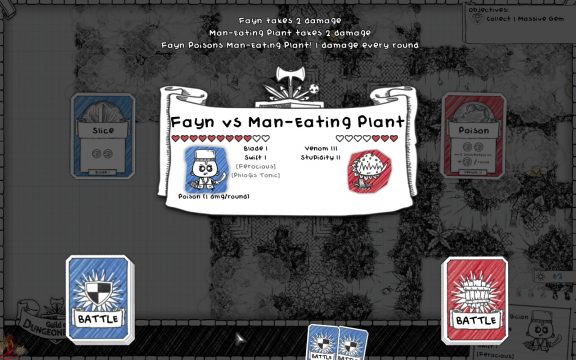 Random is the name of the game, more often than not the luck of the draw will not give the corridors needed, or the flop will only offer the least effective attacks possible, or the gear drops will be terrible, and then you’ll lose through no fault of your own. Adding insult to injury, the guy with mandolin makes fun of the player in rhyming verse. He also makes fun of you if you win, or when someone new joins the guild, so at least he’s consistent. Still stings, though.

There is an odd sense of charm to the game. The quips and comments from the dungeoneers are full of chuckles and personality. The music is small and simple and evokes the feel of a two-man band in the corner of ye olde publick house. The art has a similar nostalgia of doodling AD&D adventures on spare sheets of graph paper.

For all of its small charms on the screen, the play of the game is an exercise in bashing one’s head on a wall of monsters in the hopes that the random number gods smile upon the player and allow passage. And the reward for that is only to repeat the process again until the shallow and unsatisfying conclusion is reached.