Guardian Heroes is an RPG-flavored brawler that was originally available for the Sega Saturn back in the ’90s. Like many games for the system, it has lived on as a cult classic. Now free of the constraining Saturn system, Sega and developer Treasure have made the game available to a wider audience. This HD update provides new features like online multiplayer that refine the classic for the modern era. However, this brawler-RPG-fighter hybrid is a bit on the short side, and isn’t without some annoying issues. Still, the game proves to be one of the best beat-em-ups available today.

Guardian Heroes proceeds like many brawler games that ate many quarters during the golden age of arcades. The player proceeds from level to level, fighting enemies and bosses at a quick clip, with a limited number of lives to complete the game. What makes Guardian Heroes different from other games in this genre is the way it incorporates mechanics of both RPGs and fighting games. Players gain levels and are able to select which stats to increase as they proceed through a playthrough. Increases in health and magic points occur as soon as a player levels up, while the stat gains are selected between stages. It is important to note that all this leveling only happens for one playthrough, and there’s no transferring of leveled characters for a new game plus mode. This is a shame given the game’s short length. 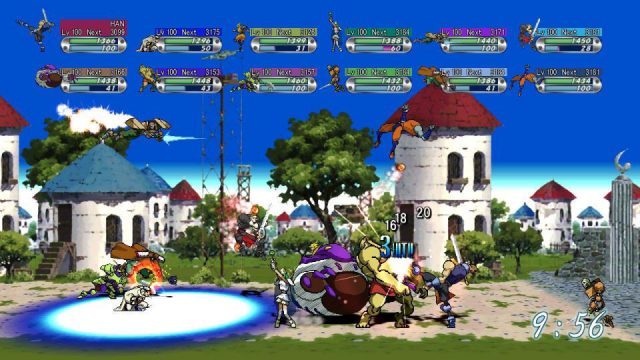 Furthering the genre mash-up style of the game, players can use various commands for special moves, very similar to games such as Street Fighter. This is accomplished by restricting player movement to left and right, eliminating the usual method of including depth in a beat-em-up. Up and down buttons instead  function as jump and crouch, with moving between the foreground and background relegated to shoulder buttons. These seemingly minor adjustments allow for a surprisingly deep fighting system, with juggling of opponents and the ability to combo regular and special attacks.

Further adding depth to the fighting is the selection of  playable characters, who fit fairly well into  the typical RPG fighter, mage, cleric and thief classes. Aside from having different selections of spells, they each have a unique set of special moves. On the easiest difficulty, players won’t need these special abilities much, but on the normal and hard difficulties players will need to make use of all the character abilities available to them to succeed. In addition to the standard story mode, there are also arcade and versus modes to pad out the experience. Arcade pits the player against all the enemies in the game in a massive fight, and serves as a fun distraction. On the other hand, Versus mode is almost its own game. Up to twelve players, along with computer-controlled characters if necessary, can duke it out in a massive brawl incorporating just about everything in the game as a selectable combatant. What depended upon having plenty of people and controllers in the original version is given a whole new life with the option of online play.

As far as the story in the game goes, it sticks to a lot of typical JRPG beats. A group of plucky young heroes accidentally gets thrown into a greater conflict  when a mysterious sword is discovered. From there the adventure goes on to explore some history of the world, the origins of the sword, and a missing royal lineage. The characters and dialogue help to spruce up what is otherwise a rather bland and straightforward story. There’s a lot of funny dialogue to keep things lively, and an updated localization helps as well. Dialogue is always kept short, and is easily skippable so that players are never far from the action. What’s also nice about the story is how the game branches at the end of most levels, with more than a score of different stages, multiple endings, and the inability to see anything close to all of them on one playthrough. The story may be simple and bland in premise, but Guardian Heroes finds a way to make its presentation entertaining. 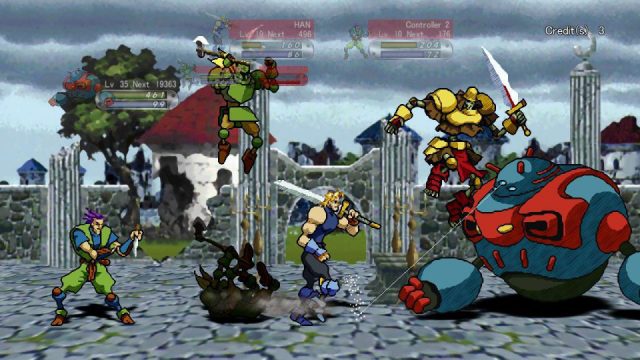 The updated graphics are missing a bit of punch.

On the audiovisual front, this update fares mostly well. The original 2D visuals still look nice, but they are showing a bit of age, and some of the backgrounds look particularly bad. The original graphics have the nice addition of a widescreen capability, enlivening the proceedings somewhat. more modern look that resembles something pencil-drawn, but end up feeling a bit too plain. The music and sound of the game fare much better. The fun and peppy soundtrack is as entertaining as it was in the original game, providing a great backdrop for the hectic battles. The sound effects do the same, with battle voices, spell sounds, and other effects rarely being repeated enough to become annoying. The audiovisual quality of the game has aged quite well, with the caveat that the visuals haven’t weathered time’s passage as well as the sound.

In the end, Guardian Heroes, despite showing signs of age in the graphics department, plays just as well as it did back in 1996. More of a brawler with RPG elements than an RPG, it provides quick and fun entertainment, with plenty of features to encourage many rounds of replay. With the addition of online play for the story and versus modes, the multi-player elements of the game can finally show their worth. The remix mode provides updates to the original gameplay, meaning that those both new and old to Guardian Heroes will find plenty to love.