From its lengthy introduction sequence to the inevitable ultimate battle, Grandia III exhibits a childlike exuberance and enthusiasm – particularly in the characters. Yuki, the main male protagonist, holds a single dream: to fly across the great ocean in an airplane, just like his hero Sky Captain Schmidt. And he’s going to do it in lucky Airplane #19. Of course, 19 is not a lucky number per se, it’s simply that Yuki has crashed and burned 18 previous planes and is completely undaunted by a track record that would ground any pilot regulated by the FAA.

Any male hero requires a female counterpoint to serve as love interest, and Alfina performs this role admirably, mixing compassion and innocence in just the right proportion to narrowly avoid being sickeningly sweet. She and her brother are the last of the Communicators, last scions of a family able to interpret the words of the Guardians. With her brother gone missing, she is on a journey to either find him or take his place. 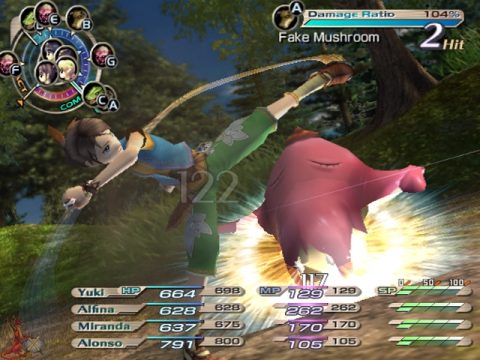 Accompanying those two young lovebirds is a small host of minor characters, joining at various times during the progress. Yuki starts his journey with his mother, a young, wise-cracking, no-nonsense woman who could easily be mistaken both in looks and attitude for a sister instead of maternal figure. Alonso is a compulsive gambler, a rogue, a sometime sea captain, and a general trickster who causes more trouble than he’s worth. Ulf is a dragon rider, flown out from his home in a hidden valley, desirous to see the world and have adventure. Buxom Dahna is chief of her people, but she has a troubled past and a bleak outlook for the future. Players will meet one more playable character, but that identity would be a bit of a spoiler.

Much of Grandia III will seem familiar to veterans of its predecessor, Grandia II; this is particularly true in terms of story. Indeed, the story will not be all that fresh or exciting to veteran RPGamers, and the main gist will certainly be recognizable territory: save the world from disaster against overwhelming odds. While a standard plot device in RPGs, this theme can be dressed up in a number of interesting ways. Sadly, Grandia III shied away from what could have been a truly intriguing plot setup. That isn’t to say that the plot is necessarily bad, but the strong start seems to fall by the wayside by the end of the game.

Grandia III‘s strongest point is undoubtedly its battle system, a slightly tweaked and modified version of the system found in Grandia II. Combat is initiated by touching a monster on the field screen (just say no to random encounters), and players can even strike out with a sword to surprise the enemy. Once combat is initialized, everyone in the melee is placed on the IP wheel according to their initiative. Different characters and monsters then move forward at various velocities, speeding toward the command line.

Reaching the command line yields the basic combat options: combo, critical, special move, magic, item, defend/dodge, and flee. Upon selecting an option, the character will move toward the action line, speed determinant on the nature of the selection, and will then execute the action upon reaching the action line. Of course, the character may have to run all the way across the field, or significant build up time may be necessary for powerful special moves or magic. 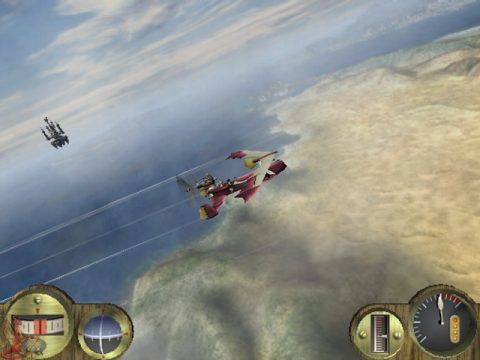 During the time in between choosing a command and the actual execution, a character is vulnerable: critical attacks (and some special moves) will actually cancel an enemy’s attack, sending the unfortunate wretch back to the beginning, passing neither Go nor collecting $200. Thus even the simplest of battles has a tactical nature to it in the essence of timing. It is entirely possible to use the cancel effect to complete annihilation of the enemy; battles fought without any of the characters suffering so much as a scratch results in a bonus.

Grandia III also introduces aerial combos and finishes. When an enemy is cancelled, that enemy is flung high into the air. If another character manages to get in a combo attack while the enemy is still in the air, an aerial combo is initiated. These combos are more powerful than normal ones, and killing an enemy will result in an aerial finish. Aerial finishes can yield more gold or rare items.

While the overall scheme of battle may seem complicated, the system is fairly intuitive and easy to pick up. As characters progress in the game, they gain new attacks, magics, skills, and items that make combat even more interesting. Even at the latest levels, combat still feels fresh and exciting — facing nine high level enemies who constantly summon more of themselves is the sort of organized chaos that RPGamers weep for. Combine this with the fact that Grandia III ups the difficulty considerably, particularly in boss battles, and you have an easy nomination for best RPG battle system. Ever.

Characters can equip both skill books and mana eggs. Both of these items will boost particular attributes; for example, the aqua egg marginally boosts water magic, and the scout book greatly boosts tech skills. Books may also be consumed to gain new skills; eggs can yield magic or be fused with another egg to create a new egg altogether. Characters have individual magic, skill, and special move levels — each of which is increased through usage in battle. These skill levels determine which eggs/books may be equipped and the number of spells/skills may be used. Magic runs the normal gambit of attack, support, or defend; skills are a bit more varied, allowing for things ranging from simple increased attributes to a chance at counterattacking to multiple combo hits.

Timewise, Grandia III feels a bit short. The main quest will likely take 25-35 hours, and sidequests are practically nonexistent. Despite having an airplane for a good part of the game, there really aren’t that many places to visit, and going back to the same old village all the time certainly does get old fast. 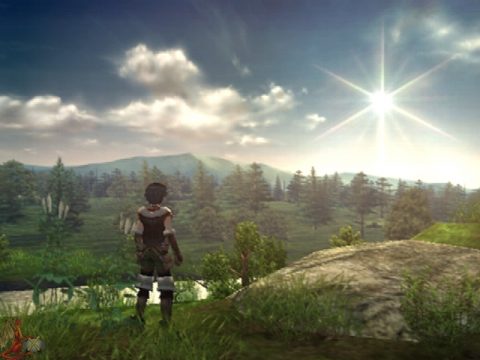 Graphically, the game looks absolutely gorgeous with a unique style. Forgoing the realism sought by many RPGs, the characters and environment are served up in anime-influenced style: brighter and larger than life. Environments are lovingly detailed, and the numerous FMV sequences leave little to wish for.

On the other hand, the sound is a bit of a mixed bag. Vocalizations are excellent and exemplary of what voice acting should be. The soundtrack itself is distinctly hit or miss though; the main theme has a distinct J-Pop feel to it and will not likely appeal to everyone. Area background music can be annoyingly intrusive, so much so that it can break immersion.

The game is not without other minor faults. Particularly vexing is the lack of a pause button during scenes. Skippable, yes. Pausable, no. And oddly enough, players must venture to a save orb or shop in order to set up magic or skills. The reasoning behind this seems nonexistent: why can players not equip at need?

Overall, Grandia III is fun romp that somehow manages to overcome all its minor faults and a mediocre story. An RPG that is greater than the sum of its parts, Grandia III comes highly recommended to all RPGamers.