Given a Glossy Sheen

Despite being around for fifteen years, Grandia II is not a game I’d played before. However, GungHo Online Entertainment America’s decision to put out the Grandia II Anniversary Edition during a low-key August and September provided a good opportunity to finally try it out. I’m happy to say that even though I have no associated feelings of nostalgia potentially providing a rose-tinted view, the game holds up surprisingly well and is up there with recent releases among the more impressive games I’ve played this year.

The biggest plaudits for Grandia II from those who have played it prior appear reserved for its battle system, and justifiably so. Combat in Grandia II, a take on active time systems with commands having a charge before they are acted on, offers a lot of potential tactics. Interrupting enemy actions while they are charging, and the danger of the party being interrupted, is a vital part of combat and those who neglect keeping the enemy from acting will regret it, especially on the tougher bosses. The overall speed of combat strikes a good rhythm as well, minus the unfortunate need for players to see the full skill animations every time, which can be grating when multiple lengthy ones are used in quick succession. Pathfinding is sometimes an issue for regular attacks in busy battles, which requires the character to physically move to the enemy in addition to the charge time, and can see people getting stuck against something else long enough to not carry out the action.

Although there are a couple of difficulty spikes early on, the standard difficulty is nicely balanced throughout. There never feels like a need to grind, but bosses frequently pose a decent challenge that requires some thinking to get through. Should disaster fall and earn a game over, save points are pretty abundant and players are never likely to lose much progress provided they’re used. With its excellent combination of tactical options, well-tuned balancing, and good pacing, Grandia II plays host to one of the most enjoyable battle systems out there. 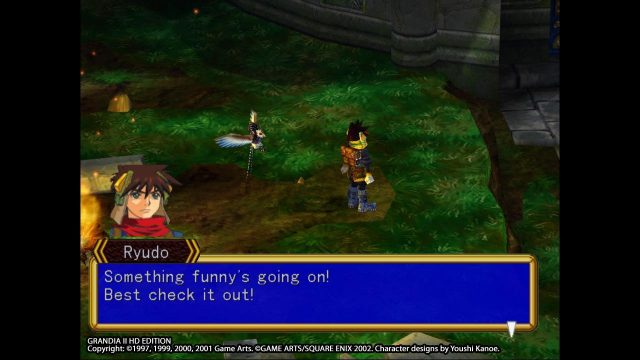 As it usually turns out in these situations, said thing is not remotely funny.

The icon-based UI and menus can leave players initially unaware of the location of certain options, but it is at least easy enough to remember where everything is after playing for a while, with the game providing a helpful amount of information during battle. Standard equipment and item systems are present, but the ability to spend points earned from battle to learn new skills, spells, and passive abilities helps to offer some extra strategic options. Events are very linear, and there’s nothing to write home for in terms of optional content, which is restricted to a solitary region for battling various monsters that is accessible just prior to the final dungeon. However, Grandia II manages to be plenty interesting enough on its own accord for this to not be an issue.

Grandia II‘s story is decent, albeit certainly not the greatest tale ever told. Following the journey of the mercenary Geohound Ryudo on his job to escort a sister of the Church of Granas named Elena, he soon becomes embroiled in schemes concerning the revival of the evil god Valmar. Complicating matters is Elena’s disappearance, where she is replaced by a completely different woman named Millenia. Millenia often appears to help out Ryudo and his companions to serve her own desires, with the relationship between her and Elena, once it is revealed, leading to an interesting amount of tension and moral ambiguity in the party.

Probably the biggest weakness in the story is the game’s setting. Not too much time was wasted on the names of events and locations, with the past Battle Between Good and Evil named exactly as such. The basic lore of Granas and Valmar is interesting, with the full reveal of their past battles offering an interesting twist, but the current state of the world and its various ruling bodies just feels a bit underdeveloped. The basic world map and limited top-down camera angle for exploring also contribute to this feeling. 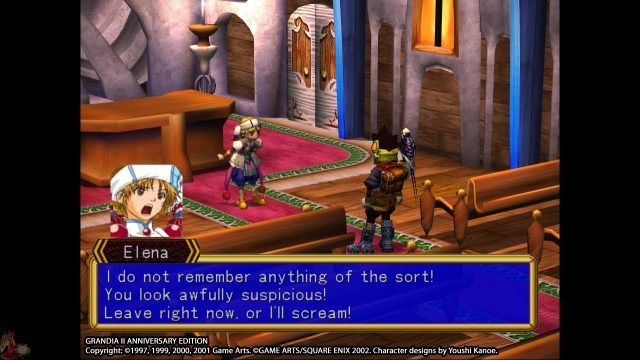 The implication being that you’re currently whispering?

There are some technical issues to report. While some bugs have been fixed with a patch shortly after release, some persistent issues remained. On top of crashes, which thankfully occured rarely enough that a restart and return to the previous save didn’t kill too much progress, the game suffers from significant slow down the longer it is running, often necessitating a restart to return things to the proper speed, though this is thankfully a quick process. Other issues simply feel a result of the game’s age, noticeable in comparatively slow-loading text boxes and lots of lengthy and unskippable animations during battles, but these are never enough to cause major annoyance.

Despite not seeming to have a huge number of tracks, the music is a joy to listen to. Noriyuki Iwadare’s score is incredibly catchy and of very high production quality throughout. Voice acting is used sparingly in events, though it gets hefty usage for battle cries and skill callouts. Most of the cast does a decent enough job when called upon, though Ryudo is pretty susceptible to overacting in key scenes. The visuals, which have been given an HD sheen, hold up pretty nicely as well, though the few FMV sequences in the game really show their age with the aforementioned slowdown also adding a slight damper.

In the end, I had a great time with Grandia II. Though there are some issues, the gameplay is such that these are much more easily forgiven than they otherwise might’ve been. Those who have yet to check out the game have a prime opportunity to enjoy its excellent combat system with the Anniversary Edition. 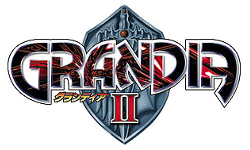