Graffiti Kingdom is the sequel to the low profile Magic Pengel, a turn-based RPG with a unique feature: the player did not merely select a character, but created them by drawing. Graffiti Kingdom keeps the drawing aspect of its predecessor, but everything else has changed. With a sequence of levels to progress through, an action packed battle system, and totally different storyline, Graffiti Kingdom is a unique gaming experience all its own. Unfortunately, the game is plagued with a few glaring shortcomings, which keep it from really shining.

The game revolves around the young prince Pixel, whose world was turned upside down when he accidently unlocked the Devil from his prison beneath the castle. The Devil changed the castle into his own personal lair and filled the surrounding lands with demons. Pixel was spared of course, and now he must go on a quest to save his family and friends and return the world to its natural state using the power of the Graffiti Wand. A fairly cliche, save-the-world storyline, with little development at all. The only really enjoyable parts of the story are the wise-crack statements the pompous prince makes to the demons and to his travelling companion.

The battle system is standard, with a bit of a twist due to the unique drawing element. Pixel himself is not a fighter, by any means, but the Graffiti Wand he carries gives him numerous powers that allow him to give the demons a thrashing. Using the wand, the player can transform into demons that are drawn on cards, whether they are original drawings or dropped cards by enemies. Each card starts out with four abilities, which can be customized from a bank of known moves, and as Pixel gains experience the number extends to allow for additional abilties to be used. His wand allows him to transform into demons he touches for a short period of time, and while transformed Pixel learns their attacks. While this is all good and exciting, the abilties themselves are pretty bland. Most attacks come in five generic flavors — neutral, electric, fire, ice, and wind — and then the attacks are divided by body part used. In the end, it’s pretty much all the same, with the only real difference between the types of attack being speed, damage, and energy usage. You can get through the entire game with just the attacks you start with, although you will need to learn some other abilities, like high jumping, to get through certain stages. 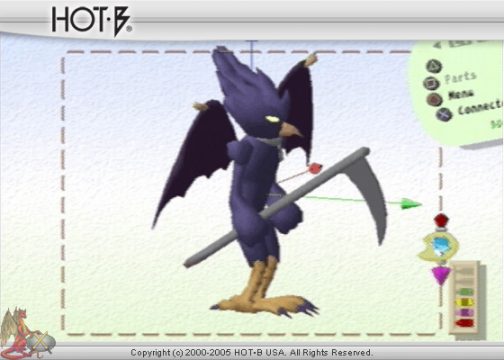 Unfortunately, the battle system is far too simple, making the game very easy. With only two or three varied attacks, a player is ready for every enemy they will encounter throughout the game. The enemies just move about and attack in the general direction of the player blindly, waiting to be dispatched and give Pixel experience and more demon cards. Even the early bosses are simply regular enemies with more HP and attack power. It isn’t until the last few bosses that there is any kind of scripted AI to the boss fights, and even in them, once a player figures out the patterns, the battles are easy. The problem with the game being so easy is compounded by how short it is. With only five areas, consisting of a total of eleven stages, each beatable in a less then 20 minutes each, and even fewer bosses than stages, the game can be completed in a single 4 or 5 hour sitting. Even if a player sets out to collect all the demons’ cards, it should not even take another 5 hours to do so. The bulk of time played falls into drawing characters, which can be a very involved process. If a player is determined to draw a very precise, detailed character, it could take at least an hour. An imaginative, detailed player will most likely spend more time drawing then actually playing through the content of the game.

Another drawback to the game is the localization, which while it isn’t awful, it can be very irritating. The text seems like it comes out of a grammar school english book, with no attempt to make the sentences flow. For example, contractions are avoided at all times, which leads for strained, unnatural conversation. It wouldn’t be so bad if it was only text, but all the text is spoken by the characters, which makes it ugly, or sometimes downright painful, to listen to.

The interface for the game is fairly organized. It’s hard to get lost in the menus, as there aren’t many to deal with. The only complicated part of the interface would be the drawing menus, which do take some getting used to. However, with steady use, even these menus become easy and familiar. 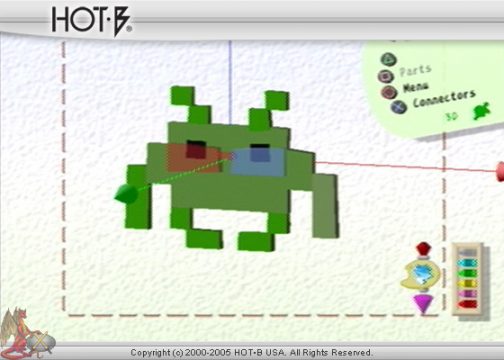 Copyright Infringement: It’s too much fun to resist!

The game really shines with originality, although it’s not as fresh here as it was in Magic Pengel. Still, several additions were made to the drawing menu to make it a bit more user friendly, and no one can argue with the fact that it’s fun to draw your own character to fight with. Also, being able to assign moves, rather then the game dictating them, is a very welcome new feature. Musically and visually, Graffiti Kingdom looks and sounds like a hand-drawn world would. The colors are vibrant, and the enemies, even though they are called demons, often look more like children’s doodles then monsters. Even the Devil himself looks like he would be better suited as stuffed doll at a carnival then an evil villain. The visuals do shine in the cutscenes which are well animated, some in 3-D and others in flat 2-D cartoon style. The music is mostly cheerful, simple and upbeat. Occasional pieces stand out as being very well done, but this is to be expected of the game’s music composer, Yasunori Mitsuda. The best way to put it is that the music fits the game, and very nicely at that.

Looking at it strictly for its standard RPG elements, Graffiti Kingdom has a lot of shortcomings, which would push it into obscure mediocrity if not for the drawing system. By drawing creatures to use, the game gains a flair only shared by its predecessor, and since it is used in a whole new way, it doesn’t feel old or rehashed. And when it comes down to it, whether they are completely imaginary or they are favorite characters from other series, drawing a graffiti creature and abusing the baddies with it is just plain fun.