Get in the Car, Loser! Review

If there is one thing the COVID-19 pandemic has made challenging, it’s going anywhere. Even a good old-fashioned road trip, is a bit more effort now given the circumstances. But what if I told you that Love Conquers All Games has provided an interesting alternative? Why not go on a virtual road trip with your new goth girlfriend, and a crew of other sweet misfits as you sally forth to destroy a new and emerging evil? While Get in the Car, Loser! won’t allow you to work on your tan or see the fall colours, it will take you on an unforgettable journey and help you make some new and memorable friends along the way.

Thousands of years ago, the Machine Devil was sealed away by the hero Agi of Roses. However, a group of cultists decides that the time for their lord’s resurrection draws near, while the Divine Order, who exist to keep the world in check, are failing to do their jobs in keeping the cultists at bay. At the Academy of the Order, three individuals decide to take it upon themselves to steal the Sword of Fate, which helped seal away the Machine Devil long ago, and go on an unforgettable road trip to save the world. Our main protagonist is Sam Anon: the titular loser and a girl who simply wants to make it through each day and work on her self-esteem. After stealing the Sword of Fate, Sam, her best friend Grace, and Grace’s non-binary partner Valentin hit the road in order to put a stop to the Machine Devil and escape the Divine Order. Along the way, they meet Angela, a former member of the Order who decides to join their cause because she can no longer sit idle while innocent people are being harmed, thus competing the party and allowing the story to truly begin.

The storytelling takes place entirely in the back of Valentin’s car. Here Sam makes dialogue choices for how to respond to different and difficult bits of conversation. A lot of the dialogue throughout feels very casual, as though players are simply hanging out with their best friends. Even so, there are lots of great instances in the narrative that touch upon interesting themes, such as what it means to be yourself, how gender is not binary, or even how our inner saboteurs often get in the way of our own success. Sam gets a lot of focus because she is learning to become comfortable with herself, often feeling like she doesn’t fully belong anywhere. She also feels like a constant third wheel to Grace and Valentin, who have recently started dating. Each of the four acts is carefully crafted to give the player a sense of both fun and foreboding, and each boss fight is a manifestation of the different internal conflict that each character is facing. This is fantastically portrayed in both the game’s narrative and in its visuals, as each act nears completion, the world is also changing with it as players inch closer to the Machine Devil. The writing throughout the game is incredibly strong and thoughtful, and the dialogue does an amazing job of having the crew’s friendship feel fully realized from start to finish. 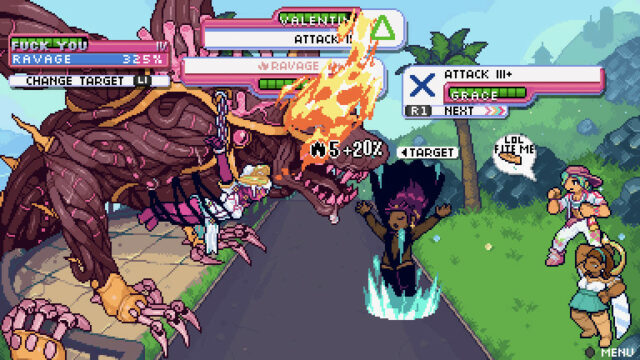 Making stops along the way is also a quintessential part of the road trip experience. Players can stop at the local gas station to pick up trinkets, which can be equipped and upgraded. Each trinket equipped on a character gives them a specific skill and a level at which they can perform the ability. Unfortunately, it’s not crystal clear at the beginning of the game how this system fully works and it takes a lot of experimenting to find the right combination of items to bring out the best in the party. Given each character has three different skills to load items on, it’s important to have some variety, but the similarity between the items makes balance difficult to achieve. Upgrading skills requires players to buy lots of items, which are destroyed to beef up a skill. This system is finicky at times, as it takes a while to find a combination that works without too much overlap. On top of that, grinding for money is an absolute must in the game, as higher-level upgrades require more items to be sacrificed to power up a skill. As players are locked out from purchasing higher-level items until all characters are equipped with the next lowest level of the item, plenty of spare trinkets are needed to move character progression forward. Once this system clicks with the player it can be a lot of fun, but at the beginning of the game, it’s rough.

While on the road, players will see three different lanes that they can move Valentin’s car into. Each lane gives key information about the next encounter, whether it’s the opportunity to stop at a gas station to refuel or an enemy confrontation. Battle info concerning enemy levels and monetary rewards is provided beforehand to let the player decide whether they can take on the enemy ahead. Once engaged in a battle, each character is mapped to a specific letter on the keyboard or face button on a controller, like the Valkyrie Profile series. Each action has a cool-down timer so that characters cannot continuously attack the enemy, but players can shift between three action sets to keep the hits coming. The goal of every battle is to ravage the enemy and stagger them so that it’s harder for them to take a turn. Enemies hit very hard, which is why balancing each of the character skills is more important. Grace also has a unique ability to use the Sword of Fate to help in the staggering process, though it has a longer recharge than anything else.

The battle system is serviceable, though it’s not without flaws. For one, it’s difficult to play on a keyboard without feeling some level of discomfort. Even though it’s possible to remap the keys, it never feels natural to how the flow of battle works and may have wrecked my wrists a little bit. Playing with a controller allows for a lot more ease when cycling through the different attack skills, while also making the battle system feel much more fluid in movement. It’s also a battle system that takes a lot of practice to get used to; it’s almost doing too much at once, and there is a lot to pay attention to in order to take advantage of everything that is happening in an encounter. However, once players find their groove in combat, there’s a lot of satisfaction in slaughtering enemies as they are encountered. 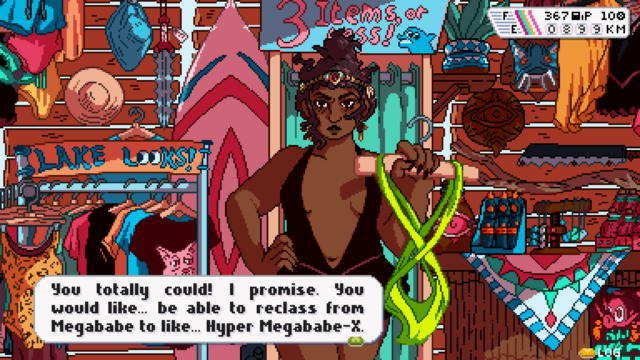 The game’s difficultly is also incredibly unbalanced, which is stems from both the combat system and the trinket system. Even playing on Story Mode, where characters are automatically healed after every battle, combat is still very challenging in the beginning. After surviving the tough introductory act, the difficulty swings back and forth with the second and fourth acts being trivial while the third brings back a level of challenge that will have players pulling their hair out. It’s just unfortunate that there isn’t a consistent building up of the difficulty. Battles never fully feel like the player is scaling alongside the enemy, and it makes for some interesting whiplash. It’s not to say that the combat isn’t fun, but there are times where encounters feel more like a chore than they do exciting.

Get in the Car, Loser’s presentation is fabulous throughout, however. A lot of the music absolutely slaps, from hummable battle themes to the simplicity and mellowness of the driving music. While there is no voice acting, the vocal tracks and radio deejays do an amazing job of making the player feel immersed in the road trip experience. The game’s visuals have a lot of punch to them. Each of the character models has a ton of detail and every enemy has a unique style to them, even with the bits of palette swapping that exists. While most of the game takes place in Valentin’s car, each area is vibrant, and the game doesn’t shy away from bold color choices.

If there is one thing I missed these last two summers, it is going on road trips with my friends. However, Get in the Car, Loser! gave me the full experience of driving down a demon-infested highway and spouting utter hilarity and nonsense with a new group of friends. The immersion of this feeling throughout the game is what entirely sells the experience, and the characters and their conflicts are both charming and relatable. While it is not a perfect experience, it’s certainly a memorable one in both narrative and presentation. With the base game being entirely free, there is no reason not to give the game a shot. Get in the Car, Loser! is the big queer road trip story you didn’t know you needed, with all the messy drama that entails.

Tags: Get in the Car Loser!Love Conquers All GamesPC